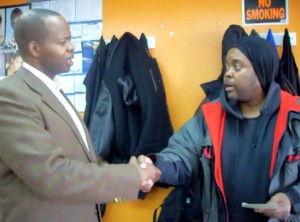 Thompson humbly describes his background at each stop. He was raised in NYC public housing, the son of a single mother who became among the first female police beat cops. As a federal prosecutor, he played an instrumental role in getting police officer Justin Volpe sentenced to 30 years for the torture of Abner Louima in the bathroom at the 70th Precinct. Thompson stood by African hotel chambermaid Nafissatou Diallo, who while on the job, was attacked by Dominique Strauss-Kahn (DSK), the French national who was the former head of the International Monetary Fund. “In December, I got DSK to settle,” Thompson said. “Now Ms. Diallo can move on with her life with her beautiful young daughter.”

When Thompson asked about stop-and-frisk experiences, at every shop there were stories.

One barber said he was his way to work one night – I work security in Manhattan – I stopped to get a cup of coffee. On his way out of the store an unmarked police car came up. They asked what he had inside the cup. He told them it was coffee. “He got out of the vehicle and knocked the coffee out of my hand. They wrote me a ticket for having an open container. I went to the 7th Precinct and complained. They dismissed the ticket,” said the barber. “This happened about 2 years ago.”

He added, “I have had customers say they also have been stopped-and-frisked. They don’t like it”.

Timothy, a customer said, “We have had legacies of DA’s for decades. I think there is not a great relationship (in general) between the police and the community. Instead of more police, there needs to be more community policing”. Thompson told him, “We in the community want the police. Timothy agreed, saying, “They serve a role. But they need to hear what our needs are. They need to know how to interact with us, not just when they are intimidating the neighborhood”. Closing his case, Thompson said, “I hope you will vote for me.” Timothy: “Definitely. Now that I know your name, I will look out for it.”

One barber recounted his experience with stop-and-frisk. “I was walking; they stopped me and said I fit the description of something that was going on,” he said. “I was coming from work.” A customer said, “I’ve been stopped a lot of times while I am driving”.

Another barber said he saw someone get beat by the police right in front of his barber shop. “He was just coming in,” said the barber. “Police came from nowhere and just started harassing him, talking about some stores got robbed close by. They slammed his head into the wall. Next thing you know, they had him on the ground, beating him. There was so much blood out there. We had to go outside and say ,‘This guy has nothing to do with what you are saying. He is coming to get his haircut’. That was crazy.”

At several stops Thompson asked, “Do you know who the current district attorney is?” Not one man in several shops full of customers knew.

“That’s a problem,” said Thompson at each stop. “When I become Brooklyn DA, you will know that Ken Thompson is there fighting to make sure that everybody is safe and treated fairly by the police and the criminal justice system. I need you to spread the word because this is a very important race. The Brooklyn DA has the ability to decide whether to prosecute a case or not, whether a case is fair or not fair.”

“The fact that nobody in this whole barber shop knows who the current Brooklyn DA is speaks volumes about what is going on. Everyone should know who the Brooklyn DA is because the Brooklyn DA should make sure you have confidence in what’s going on in the criminal justice system,” said Thompson. “Let me be clear: I don’t want to be DA just to put people in jail.” Pointing to a young child getting his haircut, Ken said, “I want to be DA to make sure this young boy can grow up and if he wants to, he can become a justice on the U.S. Supreme Court. My mother did not give up on me. I want to make sure he has the best schools and the safest communities. I believe he can be anything he wants to be. It’s my job as the next DA to make sure he has that chance. I am committed to this race for DA. Together, we can make Brooklyn safer, stronger and better”.

Thompson also went into women’s hair salons. The women also stopped what they were doing to listen. Some nodded their heads in agreement when Ken spoke of after-school arts and crafts and midnight basketball as methods to stop crime. “We need programs to stop people from coming into the criminal justice system in the first place,” said Thompson. “If you give me the opportunity to be DA, I will represent you with distinction. I will make you proud.” When Ken finished his presentation, the women applauded and invited him back to speak to more of their customers.

At another barber shop, one customer asked if Ken wanted to be the first Black prosecutor like Eric Holder. Ken took the time to explain the difference between the federal and state prosecutors. “Holder is the first Black U.S. Attorney General and if I win, I’ll become the first Black district attorney in Brooklyn.” The customer’s response: “I like that idea. Absolutely.”