Cracks in the System: Dorla and Erma Alleyne’s Story

We still receive phone calls from renters and owners, reeling from and sometimes fearful of, the power of dirty developers who break laws, get away with “accidentals”: holes in the wall, the busted pipe releasing water into basements, sometimes foot-long and inches-wide cracks running down interior and exterior walls; foundations loosed (due to hard drilling and massive pounding) from bedrock.

When city agents inspect damage done, the victim is asked if the problem was a fault of the owner’s own negligence. In other words, “prove it”.

Complaints about real estate developers’ “injustices” and misdeeds, they said then, were falling on deaf ears, and blame is still placed, quietly but squarely, as it was three years ago, on the politicians who rely on campaign support by big real estate interests.

Meanwhile, some complainants then still “live with” offenses to their residences. Others resort to the contractor’s “sloppy repairs” or inadequate compensation of damages. Some have bowed to the last resort of selling their homes.

But not Dorla Alleyne, 67, and her mother Erma Alleyne, 91, owners of 434 Lafayette Avenue.

They are “very stressed and distraught about the {ongoing demolition and excavation activity started next door at 436} in 2015”.   Here’s just a partial list of reasons:

1- Wall and floor separations from the cellar to the 1st and 2nd floors at the adjacent property at 434 Lafayette Avenue,

2- Water entering the cellar during rain- and snowfall,

3- Gas line separation at the property line under the stove causing a leak for which we were responsible for the repairs,

4- Crater in the backyard causing the cement and soil to separate toward 436 Lafayette Avenue,

5- Inability to plant our usual crops and flowers due to a large crater in the backyard,

6- Some of the cracks in the wall appear too bewildering,

7- A large crater has not been repaired.

And that’s just for starters.

Dorla says she has “been verbally and physically” attacked by the manager at the 436 construction site. Although they are “intermittently housed by friends”, they will not give up on 434.

They are not only armed with powerful lawyers ready to do battle, they are strengthened by a resolve grown out of their own family connection to Marcus Garvey. But let’s start with Dorla Alleyne’s story, in her own words.

January 27, 2015: Complaint to the Department of Buildings:

On 1/18/2015, water flooded into basement of 434 Lafayette from property at 436 Lafayette. The Fire Dept.78 Ladder 102 was contacted and they inspected 434 Lafayette where they witnessed the water flooding through the wall into the basement. Upon later inspecting the lot at 436 Lafayette, they indicated that the source was either a broken pipe at 436 or pooled water which they saw accumulated on said property which was coming through the wall into 434. DEP rep Joe visited two days later and witnessed men working in the 436 lot but they ran inside when he approached. He inspected basement at 434 where he saw water marks on the wall and the ground at the 90-degree angle but none running through the basement. He stated that he could do nothing at that time as it was no longer running through. He advised that I should call once the water is running again through the basement again.

May 22, 2017: Complaint to the Department of Investigation:

Until a call to the excavation unit a week ago, no inspector from DOB has visited the site at 434 Lafayette Avenue to assess complaints related to damage to its exposure 4 wall, chimney and cellar during demolition and excavation work at 436 Lafayette Avenue. Water continues to drain into the cellar at 434 Lafayette from 436 Lafayette Avenue during rain and snow. Stop work orders were lifted and new permits were issued for resumption of excavation and construction activity. This has caused an additional separation of the soil and concrete which are sliding towards 436 Lafayette adjacent at the back wall of the house extending more than 25 feet into the backyard as well as a wall separation at the southern border of exposure 4 wall.

Your assistance is requested in addressing the following damages to property of senior citizens 91 & 67 yrs. old:

– Since demolition of adjacent property at 436 Lafayette, water has consistently drained in my cellar when there is snow or rain,

– Sunlight can be seen from the cellar along that exposure 4 wall,

-When 911 was contacted re:damages, the owner came and offered to buy the property and blasted us for making the call,

– Wall cracks along wall have not been repaired,

-DOB has been notified since initial damage and during water drainage … into cellar,

– Sunlight can be seen from the cellar along that exposure 4 wall. 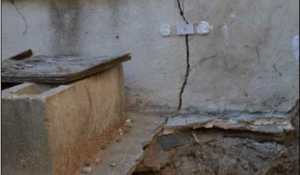 Please assist us in preventing further damage to our property and achieving appropriate repairs and remuneration.   Respectfully, Dorla and Erma Alleyne

August 8, 2017: Complaint to the Office of the Brooklyn Borough President

My name is Dorla M. Alleyne, 67 yrs. old, and my mother, Erma Alleyne, 91 yrs. old. Together, we own and live at 434 Lafayette for the past 22 years. Because of your observable interest in the well-being of the community you serve, we are requesting your assistance with the following:

First, I want to thank P.O.’s Rivero and Santos (79th Pct.), who after a 911 call, the workers at the 436 site admitted to them that they had entered our premises and removed the cement blocks to another site. They ordered them to return them (the cement blocks) to the original site and advised them of having trespassed on our premises. 5/9/17

Also thanks to P.O.’s Calhoun and Chatterton (79th Pct.), who after a 911 call, upon seeing the destruction, which now included my backyard and separation of the kitchen floor and walls, Chatterton placed a call and DOB inspectors came to the premises. 5/31/17

On 6/6/2017, Dorla was physically and verbally assaulted by the manager of the construction site at 436 Lafayette Avenue while I stood at the entry door speaking with my neighbor Mr. Pinnock. This occurred moments after building inspectors had left the premises. He stated during the assault: “What do you want out of this, what do you think you are going to get out of this; if you think this building is not going up, I have news for you, it is going up, you people think you control this place.”

911 was contacted, Officers Navarro and Manley responded. However, they did not submit a report to the 79th Pct. per Desk Officer on 6/7/2017. They had stated then that, “This is harassment, not an assault, where is the injury”? Upon submitting her report of injury, Detective Moody took the case. He took photographs of property damages. The perpetrator was ultimately arrested and charged with a felony.

– Several of their building managers, including the owner, David Snir, have entered our premises at different times and took photographs since the damages began in 2014. They made promises to repair them “after we are finished with our construction”.

–Since 2014, several 311 and 911 calls, visits to the DOB on Joralemon, as well as e-mails to the DOB and the commissioner were made, however, none of the DOB inspector visits included premises at 434 Lafayette. Police officer interventions in May 2017 were instrumental in securing active inspector visits to our site.

-After the initial complaint in 2015, David Snir came to our house and while in the foyer stated, “What the f..k are you calling the city for, you are not getting anything out of it, only call us”. He was asked to leave and while going down the front steps asked, “How much do you want for your building”?

DOB inspector Annam of 2 Lafayette St. informed us that, “We cannot force them to do the repairs to your building or comply with our order to waterproof your exposure 2 wall as they were directed in one of the violations. If they don’t agree with your engineer’s report you will have to fix it and then litigate”.

WE LOOK FORWARD TO YOUR OFFICE’S INTERVENTION TO ENSURE JUSTICE IS SERVED AND WE ARE NOT DISPLACED AS HAS BEEN THE CASE FOR OTHER SENIORS.

My attorney, Leonard Stewart, has contacted the owner David Snir’s attorney and has not received a response.

(Next week: Dorla Alleyne offers a message to the public.)