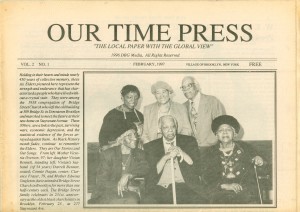 Holding in their hearts and minds nearly 450 years of collective memory, these six Elders pictured here represent the strength and endurance that has characterized a people who have lived without a crystal stair. They were among the 1938 congregation of Bridge Street Church who left the old building at 309 Bridge St. in Downtown Brooklyn and marched to meet the future at their new home on Stuyvesant Avenue. These 3O9ers, are a link to the past, surviving wars, economic depression, and the statistical evidence of the forces arrayed against them.
As Black History month fades, continue to remember the Elders. They are Our Stories and Our Songs.
From left: Mother Victoria Overton, 97; her daughter Vivian Bennett, standing left; Vivian’s husband (of 54 years) Darrell Bennett, seated; Connie Hagan, center; Clarence Fraser, 79, and Mother Edwina Singleton, have attended Bridge Street Church in Brooklyn for more than one half-century each. The Bridge Street family celebrates its 23 1st. anniversary as the oldest black church entity in Brooklyn, February 23., at 277 Stuyvesant Ave.

Constance E. Taylor-Hagan, born on December 18, 1929 in Brooklyn, New York, to the late Henry and Marion Taylor, passed Wednesday, August 1, 2012.
Services were held at her beloved Bridge Street AWME Church in Bedford-Stuyvesant, yesterday, (Wednesday, August 8). Reverend David B. Cousins, Sr., officiated.
“Connie,” as she was fondly known, was educated in the New York City Public School system.  She graduated from Bushwick High school.
At an early age, Mother Hagan was baptized and became a member of Bridge Street at the original location, 309 Bridge Street in Downtown Brooklyn.  She worked hard in the church, serving in many capacities.
She joined the Girl Scouts at an early age and worked her way up to Girl Scout Leader of Troop 304, where she became known as Captain Connie.  She served in scouting for 60 years, helping young girls grow and develop into womanhood.
Mother Hagan also was Assistant Director of the famous Pop and Cappie Fields Memorial Drum and Bugle Corps that represented Bridge Street Church in the Brooklyn Day parades on Stuyvesant Avenue.
At Bridge Street, Mother Hagan was also a past-president of the New York Club;  a member of several service groups including, the Senior Steward Board, the Lay Organization,  the Relief Society; and the church’s elite 309ers.
She was employed for 26 years by the Joseph E. Seagrams Company.
She leaves to mourn: three nieces, Beatrice Shaves and Marion Green of Brooklyn, NY; Audrey Teacher-Taylor of Orlando, Fla.; nephew Carl F. Taylor of Orlando, Fla.; and a host of relatives and friends.
Before a packed sanctuary she was hailed for her good works by the Senior Board of Stewards, the Relief Society, the Lay Organization, The New York Club Girl Scouts (Valerie Carr), Class Leader Linda Jones, and many more.  Goddaughter Cheryl Johnson delivered special remarks and Carl Taylor read the obituary.
Reverend Maurice Douglas sang her, “I Won’t Complain” and “Jesus is the Best Thing That Ever Happened Me”, and the congregation and guests joined together in the hymn, “Jesus Keep me near the Cross” and one of Mother Hagan’s favorite hymns, “Do Not Pass Me By.”
Mother Hagan was interred at The Evergreen Cemetery in Brooklyn, New York.

Services were entrusted to Arthur Brown & Son Funeral Directors, LLC of 1078 Bergen Street, Brooklyn, New York.
If my parting has left a void,
Then fill it with remembering joy.
Acknowledgement
The family of Constance Hagan wishes to express their deep appreciation an sincere thanks for all acts of kindness shown to them in their time e of sorrow.