Our Time Press: There have been a number of glitches in the start-up of the Affordable Care Act.  What is the impact of the act on the African-American community? 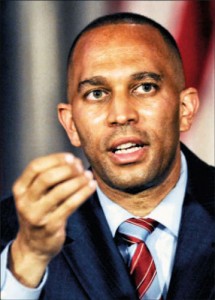 Congressman Hakeem Jeffries: There are certainly challenges with the implementation of the Affordable Care Act.  But whenever there are groundbreaking changes in public policy there will be some measure of difficulty in getting things off the ground.   When Social Security and Medicare were first implemented in the 1930’s and 1960’s, respectively, there were issues in terms of initial implementation.  Today, those two programs are an integral part of our social safety net fabric and over time, I believe that will be true of the Affordable Care Act.

In terms of its impact on the African-American community, we suffer disproportionately from a wide variety of diseases, ailments and afflictions.  Therefore, the fact that the Affordable Care Act will provide health coverage to tens of millions of previously uninsured Americans, many of whom are African-American, in and of itself will be a significant advantage.  It is also the case that African-Americans are more likely to be denied health insurance coverage due to a preexisting condition, because of the fact that our community disproportionately suffers from illnesses and ailments.  In that regard, the Affordable Care Act provision barring insurance companies from discriminating against individuals with a preexisting condition  will significantly impact our community.  Thirdly, African-Americans have a more difficult time when they graduate from college in securing employment opportunity.  That is an unfortunate reality we in the Congressional Black Caucus are working to change, nonetheless, it is something we have to deal with in terms of the present landscape.  The ACA allows parents to keep young Americans on their insurance policies through the age of 26.  Those are just three examples of the manner in which the Affordable Care Act impacts African-Americans.

OTP:  What about Drug Policy?  In the Assembly you fought for drug reform, what reforms do you look for on the federal level and what are the chances of achieving them in Obama’s second term?

HJ: Drug Policy reform is one area where there is a great opportunity for Democrats, Republicans and the president to change the criminal justice system in a meaningful way.  I’ve been appointed to both the Judiciary Committee and the House Task Force on Overcriminalization.  Which is a bipartisan effort charged with the responsibility of coming up with proposals that can be enacted into law to improve fairness and equality in the criminal justice system.

On the House Task Force on Overcriminalization, there are 5 Democrats and 5 Republicans spanning the ideological spectrum from progressives to conservatives.  However, there is uniform agreement that there has been an explosion of criminal laws that have created economic difficulties and instances of injustice that have hurt the people of this country.  Attorney General Holder and President Obama earlier this year announced steps toward reforming the manner in which prosecutors charge people with drug offenses.  Based on the recognition that nonviolent drug offenders have been treated unfairly as a result of the out-of-control war on drugs.  That is a narrative that is in many quarters of the Congress  shared by Democrats and Republicans and therefore I think there is further opportunity to further reduce the disparity between crack cocaine and powder cocaine sentencing as well as to increase judicial discretion in that has more nonviolent drug offenders directed away from the criminal justice system and into rehabilitation.

OTP:  You sound very optimistic in terms of working across the aisle.  There seems to be more gridlock facing President Obama in his second term.  What are the House Democrats doing to combat the Tea Party Conservatives?

HJ:  It is clear to me that there are people in Congress who have been determined to prevent Barack Obama from having a successful presidency from the moment he was sworn in in 2009.  In large measure they have failed, but their obstructionist efforts have prevented the Congress and the president from moving forward in a more aggressive way to deal with the problems of the American people. That said, it was important that the Democrats remained unified during the entire duration of the government shutdown and pushback against Tea Party extremism.  By reopening the government and remaining unified behind the position that President Obama took, we defeated the principle of government by extortion that would have been carried out by the Tea Party on issue after issue if we would have allowed them to succeed.  It was important not to negotiate on the Affordable Care Act under the threat of a government shutdown or a default.  Because that would have further emboldened the Tea Party extremists to carry out their archconservative agenda.  Hopefully, we now find ourselves at a moment where Democratic unity can continue on other issues and with a Congress that will no longer be held hostage by a small faction of Tea Party radicals bent on executing their “my way or the highway” government agenda.

OTP: We see you’ve introduced HR1537 regarding prisoner gerrymandering, a fight you waged successfully here on the state level.  What are the prospects of that legislation?

HJ: Inmate-based gerrymandering poisons the integrity of our democracy and I’m determined to obtain a change in law nationally, similar to what we accomplished in New York.  At the present moment there are only two states, New York and Maryland, which count incarcerated individuals as residents of their home communities, as opposed to their counties of incarceration.    It’s important for that change to take place nationally in order to help create a better climate for an active and progressive urban agenda to take hold in the Congress.

The bill has significant support with most members of the Congressional Black Caucus, and I look forward to communicating with other colleagues throughout the Congress in order to gain the support necessary to getting it passed into law.  Given the fact that the next census will not take place until 2020, we have the opportunity to use the time to develop an effective coalition over the next few years where we can eventually get the law enacted in time for it to take effect prior to the next census.

OTP: What do you see as the future of Interfaith Hospital?

HJ: Preventing the closure of Interfaith Medical Center is the most critical issue I’m working on right now as it relates to Bedford-Stuyvesant and the communities of central Brooklyn that I represent in Congress.  Over the last several years, we’ve witnessed an unprecedented assault on health care institutions in communities of color throughout the city of New York that is an assault that we must stop dead in its tracks.  And I’ve made clear at all levels of government that we will not tolerate the contraction of health care services in the Bedford-Stuyvesant community.  Clearly, there are changes that need to be made from a management perspective as it relates to the efficient running of health care at Interfaith Hospital.  I’ve worked closely with members of the congressional delegation, including Congresswoman Yvette Clarke on this issue, we’ve been in constant communication with both the governor’s office and the White House to make sure that we can secure the resources necessary to keep the medical facility alive.  The challenge will be to secure a favorable determination on New York State’s Medicaid Waiver application, which will unlock billions of dollars in resources that can be made available to our state, a significant portion of which could be used to save Interfaith Medical Center.

OTP:  Another issue in the state is hydrofracking and the effect on the environment.   Does that fall under your purview and what is your opinion on that?

HJ: During my time in the state legislature I’ve consistently voted against authorizing hydrofracking from moving forward in New York State given the uncertainty of the environmental impact, particularly on our water supply here in Brooklyn and New York City.  I think we have to proceed with caution until we understand the environmental consequences of hydrofracking.  It is clear that in other states there has been some economic benefits to allow hydrofracking to occur.  And there are many residents in upstate New York who believe that for that reason alone it should be authorized, but as we’ve seen in other contexts, particularly the explosion of prison construction in the 1980’s and 90’s which was done explicitly to help the economy of upstate New York, it also has the effect of increasing criminalization of communities of color in downstate New York to fill those prisons.  In the hydrofracking context, I’m sympathetic to the notion that the upstate economy needs to be revitalized, but it should not be done at the expense of the health well-being and environment consideration of the communities I represent in Brooklyn and Queens.

OTP:  What is your position on the Common Core program?

HJ: I share concerns related to the implementation of the Common Core program as articulated by teachers, educators and parents.  I myself have two children in the public school system, and have a personal interest in making sure that our school system provides all children with a first-rate high-quality education.  For many decades, the public school system has failed many  children in communities throughout central Brooklyn, condemning many to life sentences of disadvantage and despair.  We have to dramatically transform our educational system to help all our children and adequately prepare them for the challenges of the 21st century.  The one thing that is clear is that we have to move away from an overreliance on testing in the public school system and move toward preparing our children to be critical thinkers with a well-rounded education that will best prepare them to go out into the world and be successful.

The other issue that’s important during the time I’ve spent in Congress is trying to deal with the issue of gun violence in our community.  I’ve met with high-level officials of the Bureau of Alcohol, Tobacco and Firearms (ATF) in order to discuss ways that agency can be more engaged in preventing the flow of illegal guns into our community.  We know that no guns are manufactured in Brooklyn.  And that the overwhelming majority of guns used to commit criminal offenses in our community come from states like Virginia, Florida, Pennsylvania or other parts of the Deep South.  These illegal guns make their way up the I-95 corridor into our community and then wreak havoc.  We need to improve the quality of the laws nationally in order to prevent the flow of illegal guns into inner-city communities all across the country, including New York, Chicago and Los Angeles.  I also thought it was important to figure out ways to have the ATF work closer with law enforcement authorities in New York City to more effectively prevent guns from getting into the hands of those who would do harm to those living in Bedford –Stuyvesant, Coney Island, East New York and Ocean Hill-Brownsville.