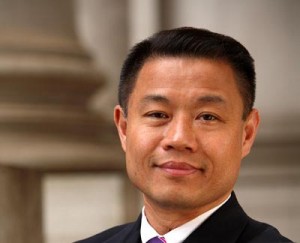 OTP: Your State of the City Address, what would you say were the main points?
Liu: I talked quite a bit about the wealth divide and how we need to correct that by growing the middle class by uplifting the working poor. Raising the city’s minimum wage to $11.50/hr. Which actually has a sound economic basis, it’s not a seemingly random number like other numbers that have been thrown out. I also talked about the need to increase the number of New Yorkers with college degrees. And one way to do that would be to offer free tuition to the top 10% of high school graduates in the city. I think that would be an extremely smart investment in the city’s future. We’re falling behind other major American cities in terms of the proportion of our population that have college degrees. In the 21st century economy, college degrees are almost a must at this point.
OTP: CUNY used to be free for everyone.
Liu: Yes and I would like to say, although it seems difficult over the next few years, I have an aspiration to restore the days of free CUNY tuition.
We need to enhance safety for communities across the city and that includes abolishing stop-and-frisk, which is a tactic I don’t believe works. And, in fact, harms communities by creating a deep rift between the police and the community they are responsible to protect.
OTP: Along with that, the stop-and-frisk, we see they have over $180 million in legal claims.
Liu: Yes, in fact, claims against the NYPD are growing faster and at this point are greater, than against any other city agency.
OTP: That $180 million sounds like a lot of money. That does not come out of the police budget does it?
Liu: No it doesn’t. It comes out of the general revenues.
OTP: So they’re held harmless in effect.
Liu: One of the recommendations I’ve made in the analysis of these claims is to have each agency responsible for their own claims cost. That way, if it hurts a little bit, we can align the interests a little better.