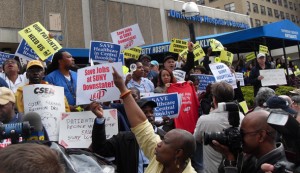 Hundreds packed the Mt. Zion Church of God, and then marched to SUNY Downstate where they were greeted by hundreds more. Chanting “Health care is a right! Fight, fight, fight!” and “Cuomo, Cuomo hear our cry! We won’t let you privatize!” the Coalition of Faith, Labor and Community Leaders came together to demand that SUNY Downstate Medical Center and University Hospital remain open as a public institution. “The religious coalition formed because I don’t think just the Christian religion can [save Downstate]. We needed a collaborative effort between all religions. The hospital is not just for Christians. It is for Muslims, it is for Jews, it is for the rich and poor,” said Pastor Gil Monrose. “When you have these critical moments, we need to be able to come together.”

The rally to save SUNY Downstate — planned several weeks in advance – occurred on the same date it was announced that Gov. Andrew Cuomo sent a letter to the Obama Administration requesting federal assistance on Medicaid funding formulas. New York saved more than $17 billion resulting from Gov. Cuomo’s Medicaid Redesign Team, but since Medicaid is a federal/state partnership, the state savings came with reductions in federal reimbursements. Cuomo’s letter to Health and Human Services Secretary Kathleen Sebelius wants the federal government to grant a waiver so that $10 billion of the restructure savings could be used to support failing hospitals.

“Due to a rapid deterioration in the financial status of essential components of the health care services system in Brooklyn, if nothing is done within the next 12 months, the outcome will be disastrous,” Cuomo wrote to Sebelius. “Access to care will be compromised and the remaining health care providers in the borough will be destabilized.”

“With 8,000 employees and 400,000 individuals treated at SUNY Downstate last year, Downstate cannot be allowed to fail,” said Bishop Findlatter, President of Churches United to Save and Heal (CUSH). “It makes absolutely no sense to talk about privatizing a public hospital. If you lose your job it will affect every business in the community. If you lose your job it will affect the health care of every person who lives in East Flatbush, Ditmas Park, Flatbush and Canarsie. We will not allow that to happen.”

In a direct message to Gov. Andrew Cuomo Findlatter said, “If you don’t do right by the people of Central Brooklyn, we voted you into office, we will vote you out of office. If saving Downstate is important to the governor and the legislators, they will find the money.”

Speaking on behalf of the Crown Heights Jewish community, Rabbi Cohen called SUNY Downstate “a source of healing”. Cohen joined with the other voices demanding that this institution remain open and remains able to serve the most vulnerable. “There are many people who work in this hospital — as nurses, as aides, as doctors – who put in effort way beyond their capabilities to look after people,” said Cohen. “Your lifesaving efforts deserve to be recognized. The state can find the money to keep this hospital open.”

SCEA regional president Lester Crockett said, “We will not allow Gov. Cuomo or anybody to close this hospital. It is part of this great community, and it is something we will fight for today, tomorrow and however long it takes.”

Fred Kowal, President-elect of 36,000 members of United University Professionals (UUP) said, “Health care provided here is a civil right. This is a healing place. This is where we [together] make life in Brooklyn better for all.”

Susan Kent, President of the Public Employees Federation (PEF): “Health care is a human right. I want to thank the imams, the rabbis, the pastors, the bishops, my brothers and sisters in the labor unions, and community groups for being here and standing up for the people that we care about and serve every day.”

President of Professional Staff Congress (PSC) Barbara Bowen (representing 25,000 professors and staff of the City University of New York) said, “NYC has the greatest income inequality of any city in this country, the greatest gap between rich and poor. If this city (with the richest people in the country) cannot find a way to provide health care for all of us then that is an indictment of the whole state and the city. There is nothing more sacred and more personal than health.” Bowen added, “When you attack health, you attack the most basic part of us.”

Regarding the relationship between SUNY Downstate and LICH, Burt said he “smelled a rat. We bought a hospital – LICH – three years ago that was losing money for the previous 15 years. I don’t believe that people are that stupid that they would make a business decision like that. Now they have been losing money for 18 straight years. It is an albatross around our neck.” He added, “I have no ill feeling for my brother unions at LICH, but the state had their hands in that.” Referring to Gov. Cuomo Burt said, “You are not going to run for president and think that all of Brooklyn is not going to be fighting you” if something happened to SUNY Downstate.
Rev. Al Sharpton; Anthony Harmon, Director of the Community and Parent Outreach Dept., UFT; James McDougal, member of National Action Network; Anthony Feliciano, Dir. of the Commission on the Public Health System; Anita Burson, Pastor of El Peter Community Baptist Church in Crown Heights and NAACP 1st Vice Pres.; and Barbara Ingram-Edmond representing DC37, also spoke in support of Downstate.

“We really don’t need a miracle to save Downstate and that other attachment to Downstate… LICH. We need money,” said Assemblyman Nick Perry. “I have been in government for 21 years. One thing I know, which is a fact: When there is a will to find money to do anything, government can find it.”

Perry urged that letters be written to the President and the Secretary of HHS to urge them to act on the Medicaid waiver.

Assemblyman Perry said that during this year’s budget negotiations he “made sure that nothing in that budget language should be construed, interpreted or understood to allow that Downstate become a private facility”.
“My colleagues and I are committed that we will not lose this treasure on our watch,” said Perry.