Altar: Prayer, Ritual, Offerings @ Photoville, Brooklyn Bridge Plaza at Water & New Dock Sts.,11AM-10PM, FREE. Marilyn Nance, Deborah Willis and Salimah Ali are among the many talents included in this show by MFON: Women Photographers of the African Diaspora. It takes the altar out of its religious context and interrogates photography as a practice containing the same attributes as altars. It regards the final product—the photograph—as the altar. Also on view 9/21, 9/22 and 9/23, 11AM-10PM.

Black Panther in 3D w/the Visual Effects Artists @ SVA Theater, 333 W. 23rd St., 8-11PM, FREE. Take a trip back to Wakanda and behind the scenes with two of the film’s visual effects artists, Ruel Smith and Wendi Harris Wu, as well as critically acclaimed comic book artist and author Shawn Martinbrough. Preceded by the world premiere of the short film Mario and The Powerglove by Joseph Petrick. Limited free popcorn, water and snacks. Guests are allowed to bring food and drink, but no glass bottles.

The Brooklyn Book Festival, Brooklyn Borough Hall, 208 Joralemon St. and various venues (indoor & outdoor) in the vicinity, 10AM-6PM, FREE. One of the nation’s blockbuster book events and NYC’s largest. More than 300 national and international authors will participate and 250 booksellers will set up. The offerings are vast and varied. Review them at brooklynbookfestival.com to plan your day. Be prepared to line up for entry to events featuring celebrity authors.

Book Talk: Never Ran, Never Will: Boyhood and Football in a Changing American Inner City @ Brooklyn Historical Society, 128 Pierrepont St., 6:30PM, $5. Join author Albert Samaha for the uplifting story of the Mo’ Better Jaguars, a youth football team offering opportunity, community and refuge to Brownsville’s young men. Against the backdrop of economic tensions and encroaching gentrification, these young players forge friendships and their visions for the future. Register at Eventbrite.

Heather Headley: Life is a Stage on PBS Channel 13 or local listings, 10:30PM. Highlights from the Tony winner’s most memorable performances. Repeats 9/29 at 1PM. 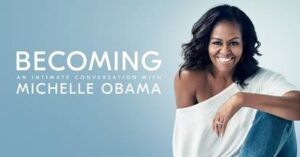 The former First Lady heads to Brooklyn’s Barclay’s Center on Sat., Dec. 1st in support of her highly anticipated memoir. This appearance, the only New York stop on the limited 10-city tour, will feature intimate and honest conversations between Mrs. Obama and a selection of to-be-announced moderators, reflective of the extraordinary stories shared in the wide-ranging chapters of her deeply personal book. Tickets can be purchased online at www.becomingmichelleobama.com, ticketmaster.com, or by calling 800-745-3000.

A Year Reflecting on Race and Diversity in America @ Photoville, Brooklyn Bridge Plaza at Water & New Dock Sts.,7:30PM, FREE. Featuring National Geographic photographers who contributed to a series on race and diversity. Wayne Lawrence did “The Many Colors of Matrimony” and “The Stop,” with ESPN’s The Undefeated about Black and Hispanic motorists who’ve been pulled over by police. Ruddy Roye and Nina Robinson did “A Place of Their Own,” about rising enrollment and student activism at Historically Black Colleges and Universities.

Computer Construction and Repair Course @ CEMOTAP Center, 135-05 Rockaway Blvd., South Ozone Park, Queens, 9:30AM-1:30PM, FREE. First session of a course by computer expert George Johnson introducing students to disassembling/assembling a PC. Students will take their computers home upon successful graduation. They’ll be taught to troubleshoot common problems and about contributions of African people to computer sciences. Only 10 highly motivated students will be accepted. Those interested should have their parents call 347-907-0629. Signed application/consent forms must be submitted by noon, Tues. 9/18.

Quincy Troupe on Miles and Me @ Dweck Center, Central Library, 10 Grand Army Plaza, 7:30-PM, FREE. Poet, activist and journalist Quincy Troupe’s candid account of his friendship with Miles Davis is a revealing portrait of a great musician and engrossing chronicle of the author’s artistic and personal growth. Miles and Me intimately details the sometimes-harrowing processes of Davis’s spectacular creativity and the joys and travails his temperament posed to their friendship. RSVP at brooklynpubliclibrary.org

March for Black Women–Location to be announced. The Violence Against Women Act is set to expire on this date. This march, organized by Black Women’s Blueprint, directly follows the organization’s 9/29 march on the National Mall in D.C. Both call on Black women to cast #onevote for meaningful policies to end – gender violence, the persistent feminization of poverty, the growing Black female prison population, restrictions to citizenship and the deportation of Black and Brown people, and the threat to health care and reproductive justice. Visit blackwomensblueprint.org