Comments on Passing of Percy Sutton (In Formation)

Barack Obama on the Passing of Percy Sutton:

Percy Sutton was a true hero to African Americans in New York City and around the country. We will remember him for his service to the country as a Tuskegee Airman, to New York State as a state assemblyman, to New York City as Manhattan Borough President, and to the community of Harlem in leading the effort to revitalize the world renowned Apollo Theater. His life-long dedication to the fight for civil rights and his career as an entrepreneur and public servant made the rise of countless young African Americans possible. Michelle and I extend our deepest condolences to his family on this sad day.

12.26.09 Governor Paterson released the following statement on the passing of Percy Sutton:
“Tonight, we say farewell to one of New York’s and this nation’s most influential African-American leaders – a man whom I am proud to have called a friend and mentor throughout my entire career.
“Percy Sutton was a trailblazer. He began his career as a prominent lawyer for Malcolm X and then took Harlem by storm as a leader of the Harlem Clubhouse where he launched not only his own successful political career but, as a member of the Gang of Four, spawned the successful careers of so many other African-American leaders. It was Percy Sutton who talked me into running for office and who has continued to serve as one of my most valued advisors ever since.
“The youngest of fifteen children, Percy dreamt big and exceeded even the highest of expectations. His success did not end simply with legal triumph or elective office – both of which he attained. Beyond those achievements, it was his entrepreneurial spirit that led to some of his greatest accomplishments – the rebirth of the Apollo Theater, the stewardship of a growing media empire and more.
“Percy was fiercely loyal, compassionate and a truly kind soul. He will be missed but his legacy lives on through the next generations of African-Americans he inspired to pursue and fulfill their own dreams and ambitions.
“Thank you, Percy, for your friendship and for all that you have contributed to our State and our Nation. On behalf of Michelle, the Paterson Family and all New Yorkers, our prayers are with your family.”

“Yesterday, New York lost a giant of a man, and I lost a dear friend and valued mentor.

“Percy Sutton was a defining figure in the African American community for over half a century. As leader of the Harlem Clubhouse, ground-breaking civil rights attorney, former Manhattan Borough President, and business entrepreneur, Percy forever changed the political, social and economic landscape of New York. Savior to the famed Apollo Theater and member of the celebrated Tuskegee Airmen of World War II, our state and nation owe him a debt of gratitude that can only be truly honored by a commitment to follow in his trailblazing footsteps.

“Percy’s steady influence and fearless leadership touched the lives of countless New Yorkers and paved the way for future generations of elected officials and community activist. He fought to make New York a better place and leaves behind a legacy of success and burning torch for others to carry in his absence.

“Percy Sutton led a life of great distinction and will be sorely missed by friends and strangers alike. I would like to thank him one more time for his kindness, his leadership and his guidance.”

Congresswoman Maxine Waters Mourns Passing of Percy Sutton
Washington, DC – Congresswoman Maxine Waters (D-CA) released the following statement today on the passing of political and civil rights leader Percy Sutton:
“I am saddened to learn of the death of my old friend Percy Sutton.
Percy emerged as one of the great civil rights lawyers and leaders of the United States, with courage and legal talent that served him well as he represented some of the highly visible community and civil rights leaders in New York and throughout the country. And he was well prepared to do so, volunteering with the N.A.A.C.P as a young man, serving our country with distinction as a Tuskegee Airman in World War II and in the Air Force during the Korean War, and attending Columbia Law School and graduating from Brooklyn Law School.
It is well known that he represented Malcolm X, but more than that, he became a great friend to his wife Betty and their children following Malcolm’s tragic and untimely death.
Percy loved Harlem, and he invested tremendous time and energy in its economic development, most notably his work to revitalize and save the iconic Apollo Theatre.
He was instrumental in helping to elect David Dinkins the first African American Mayor of New York City, and not only helped to shape Dinkins’ career but the careers of other leaders such as former New York Secretary of State Basil Paterson, Congressman Charlie Rangel and New York Governor David Paterson. Percy was a committed public servant himself, serving in the New York State Assembly and as Manhattan Borough President for over a decade.
Percy was also an advisor to Rev. Jesse Jackson during his 1984 and 1988 presidential campaigns. From my role on both of those campaigns I can speak firsthand to the impact he had on Rev. Jackson and the tone of those groundbreaking races.
Percy Sutton will not only be remembered for his legal talent, political acumen, and community development leadership but also for cofounding the Inner City Broadcasting Corporation, which afforded the African American community the kind of communications network that truly focused on news and interests of concern to us. His boldness in establishing New York’s first African American-owned radio station is especially salient during this time of shrinking and disappearing minority, small, local and other media outlets throughout the country.
Many of us who witnessed his dedication to, commitment to, and love for his people and his community will forever be inspired by all that he accomplished, and we are dedicated to continuing his legacy.
My thoughts and prayers are with his wife Leatrice, his children and grandchildren, his family and friends, and the countless people in Harlem and the United States who knew and who were influenced by Percy Sutton.”
### 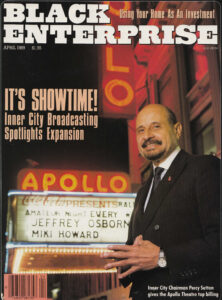 (New York, NY) December 28, 2009-Percy E. Sutton never met a challenge too great for his boundless energy and intrepid spirit. The founder of Inner City Broadcasting Corp. (which operated the first African American-owned radio station), a Tuskegee Airman, and lawyer, Sutton’s shrewd business sense and iron will made him a force to be reckoned with. The pioneering figure died Saturday. He was 89.
Although he was a San Antonio, Texas native, it was in New York City where Sutton sowed seeds of success cultivated with integrity and indomitable will. The youngest son of a former slave, Sutton made his way to New York before joining the Tuskegee Airmen as an intelligence officer in World War II after being rejected by white Southern recruiters in his hometown. Following a stint in the Air Force, Sutton and his brother Oliver opened a Harlem law office in 1953. His firm represented slain activist Malcolm X, his wife, Betty Shabazz, and the Black Panthers, among others.
“At a time when few African Americans went into the law, Sutton opened up his own practice that aggressively defended civil and human rights activists in New York and elsewhere around the country,” says friend, U.S. Rep. Charles Rangel.
But it was his business acumen and foray into New York City politics that burnished Sutton’s legacy. In 1972, he and his brother founded New York-based Inner City Broadcasting Corp. (ICBC) (No. 80 Black Enterprise Industrial/Service 100 with revenues of $50.6 million), which began with a single radio station, WLIB-AM. With 50 original shareholders, including Jesse Jackson, future New York City Mayor David Dinkins, and Betty Shabazz, the group purchased the station for $1.9 million, with the Suttons owning more than 51% of the company. It eventually went on to add WBLS-FM, one of New York City’s top ranked radio stations, along with stations in San Francisco, Los Angeles, and San Antonio.
“The people who initially invested in Inner City Broadcasting really did not expect us to make money on an AM daytime radio station in Harlem, but they were really interested in getting a piece of the media that had impact on the community,” Sutton’s son, Pierre told Black Enterprise magazine in 1989. Pierre assumed chairmanship of ICBC in 1991.
In the 1970s, Sutton, who served in the New York State Assembly, was a member a group of black politicians from Harlem dubbed the “Gang of Four,” which included Rep. Rangel; Gov. David Paterson’s father Basil, who became New York’s secretary of state; and Dinkins. He was the longest serving Manhattan borough president holding the position from 1966 to 1977.
Despite a failed 1976 failed bid for a mayoral seat, Sutton still exercised influence in local politics and business.
“As Borough President, Sutton advocated for and implemented programs that specifically targeted the City’s most vulnerable populations,” said Arva Rice, president and CEO of the New York Urban League.
A fixture on the legendary 125th St. as a young man, Sutton was able to give back to the community that helped shape him when he purchased a financially beleaguered Apollo theater for $250,000 in 1981. With the acquisition, ICBC also acquired or launched a magazine, record and publishing companies, an artist management company, and several other related entities, including a syndicated television show, “Showtime at the Apollo.” Along with the purchase Sutton secured investors for an $18 million renovation of the theater.
In addition to his radio holdings, Sutton also headed a group that owned The Amsterdam News, the second largest black weekly newspaper in the country. The paper was later sold.
“[Sutton’s] life-long dedication to the fight for civil rights and his career as an entrepreneur and public servant made the rise of countless young African Americans possible,” remarked President Barack Obama.  Sutton’s achievements mark a staunch dedication to education instilled in him and his siblings by his father, Samuel, who was born into slavery just before the Civil War. Samuel went on to become a high school principal. Sutton, the youngest of 15 children, was born in San Antonio on Nov. 24, 1920. Samuel made sure that 12 of his surviving children all went on to attend college.
Black Enterprise recognized Sutton with the Arthur G. Gaston Lifetime Achievement Award in 2000, one of many awards, including the 1987 NAACP Spingarn Medal, to his credit. Also in 2000, Black Enterprise readers named Sutton one of the “10 Most Important Black Business Luminaries” of the 20th century.
“Tuskegee Airman. Civil-rights activist. Attorney for the family of Malcolm X. First black (and longest-serving) Manhattan Borough President. BE 100s CEO and founder of Inner City Broadcasting Corp., one of America’s largest black-owned companies. Key strategist for the ground-breaking presidential campaigns of Rev. Jesse Jackson. Any one of these designations would make Percy L. Sutton, the youngest son of a former slave, a giant among men,” says Black Enterprise Publisher Earl Graves. “The combination of these, only a sampling of his achievements, stamps Sutton as a true titan. He lived a life full to overflowing, setting a standard truly worthy of emulation, and I am blessed and proud to have been his friend.”
Sutton is survived by his wife, Leatrice; his son Pierre, and daughter Cheryl.
By Renita Burns with Alfred Edmond for BlackEnterprise.com.