Vann and community ready to move ahead with feasibility study 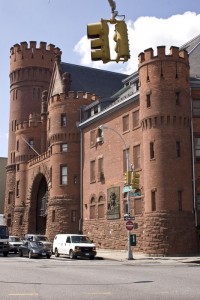 While the Park Slope Armory received $16 million for a state of the art recreation center in recent years to go along with being a women’s homeless shelter, and the city is in the process of taking bids for $14 million in similar work at the Bedford-Atlantic Armory in Crown Heights, which also houses a men’s shelter, weeds and litter abound on the small patch of grass in front of the Sumner Armory.

Like the other aforementioned armories, the city’s Department of Homeless Services (DHS) run the underutilized armory and has contracted the Black Veterans of Social Justice to run a 200-bed men’s homeless shelter called Pamoja House.

Community Board 3 Chair Henry Butler said the community is ready to move ahead with a $105,000 feasibility study on possible multi-uses for the armory, but the DHS has to green light the study and the agency has been hesitant to do that.

“Initially they (DHS) wanted to increase the population about a year ago to 400 men, but that was put on hold after (City Councilman) Al Vann and others wrote letters against the plan,” said Butler.

Butler said besides Vann, State Sen. Velmanette Montgomery and Borough President Marty Markowitz have all tried to get the ball rolling on the armory project, but DHS continues to be uncommunicative.

“The DHS commissioner is not willing to work with us (on the study) and DHS has to be on board with this project. The process is slow because the commissioner does not want to do it,” he said.

Vann said he remains committed to ensure the armory gets funding for multi community uses.

“The Sumner Armory is an important community asset and maximizing its usefulness will require extensive research, fundraising and planning,” he said. “Community Board 3 is in the initial stages of this work and I am committed to assisting with this project, as I have with other major community development efforts over the years.”
Vann spokeswoman Dynishal Gross said the first step is not funding the feasibility study, but reaching agreement with DHS.

“Those discussions are beginning and when they have evolved sufficiently, a feasibility study will be the likely next step. Pratt Center for Community Development is a likely entity to conduct that study,” she said.

The DHS did not return several phone and email inquiries regarding the project at press time.