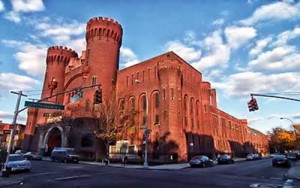 With just three months left in the Bloomberg Administration, the city’s Department of Homeless Services (DHS) has finally green-lit a study to utilize the Sumner Armory for community services with one caveat – the community must come up with the money for the study.

The DHS currently runs the underutilized armory, located on the corner of Marcus Garvey and Jefferson Avenues, where it has contracted the Black Veterans for Social Justice (BVSJ), who run a 200-bed men’s homeless shelter called Pamoja House on the first floor.

Community Board 3 Chair Tremaine Wright said the feasibility study would look at moving the men’s shelter to the second floor of the massive armory and allow for community use on the first floor.

“This is a huge step. It’s something the community has been fighting to get for a long time,” she said, adding that DHS is planning to put out a Request for Proposals (RFP) for an entity to perform the study.

But DHS spokesperson Heather Janik denied the agency is putting out an RFP on the armory and offered only tepid support.

“A feasibility study is welcomed by the Department of Homeless Services if funding options are offered by the community,” she said.

The slight movement on the study comes after the agency (under the Bloomberg Administration) has repeatedly stonewalled efforts by local elected officials including City Councilman Al Vann, State Sen. Velmanette Montgomery and Borough President Marty Markowitz to allow part of the armory for community use.

Meanwhile, the Bloomberg Administration supported the Park Slope Armory receiving $16 million for a state-of-the-art recreation center, along with being a women’s homeless shelter, and the city is in the process of taking bids for $14 million in similar work at the Bedford-Atlantic Armory in Crown Heights.

Wright said DHS Adult Services Commissioner Douglas James announced the agency would finally support the study at a Sept. 23 budget consultation meeting with the community board.

While it doesn’t appear the study will get off the ground under the current administration, City Councilman-elect Robert Cornegy will most likely back the project. Additionally, former Park Slope City Councilman and Democratic mayoral nominee Bill de Blasio was instrumental in helping the Park Slope Armory get funding for community use.

BVSJ officials did not return calls at press time.