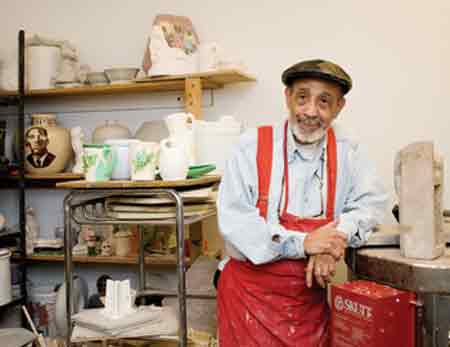 The Best of Our Time: John Llanos, former archaeologist and one of New York City’s best kept secrets as a master ceramicist, is on permanent leave from the Cultural Arts Center of Von King Park. Mr. Llanos introduced the ceramic arts to hundreds in the Central Brooklyn community. Mr. Llanos also created the breathtaking statuary that once graced the center lobby and the coveted awards and gifts for the Center’s March Women’s History Month Awards programs in 2009 for 40 women and in 2010 for 27 community journalists. Hiroki Kobayashi photographed Mr. Llanos as part of an AT HOME series of images on the park and its staff for Our Time Press.

Local residents outraged at city decision with no community input, and slashing of essential teen and adult programs

The city has quietly cut the hours of a popular park cultural center in the heart of Bedford-Stuyvesant that serves dozens of young kids, teens and seniors – helping some with homework, providing a computer lab for others and involving many with arts programming.

Parents were notified Feb. 8 that the Herbert Von King Cultural Center’s hours would be reduced from 10 am to 9 pm on weekdays to 10 am to 7 pm, effective Feb. 14.
“I’m infuriated that the Parks Department didn’t even consider having a dialogue with the people this affects,” said Lydia Temples, whose nine-year-old daughter Nia Temples-Orr goes to the cultural center after school.
“The people most affected by this cut is the at-risk teenagers that come to learn drama and dance, and the seniors,” she added.
The center, a former public library, is located in the popular eight-acre Herbert Von King Park bounded by Greene, Lafayette, Tompkins and Marcy Avenues. It includes an amphitheater, a computer lab and a homework room. The indoor/outdoor amphitheater also hosts popular concerts in the summer.
The reduction in hours comes just a couple of months after the city cut a well-attended ceramics and pottery class at the center.
Temples said when she first heard about the cuts in hours, she immediately circulated a petition, which garnered over 80 names, and gave it to City Councilman Al Vann’s office.
The petition notes that seniors and teens normally use the center from 7-9 pm, where they can take drama and dance, or sharpen their computer skills.
Vann Spokesman Mandela Jones said the councilman’s office was unaware of the cuts in hours until it received the petition. Also kept out of the loop was Community Board 3.
“The Parks Department acknowledged a misstep in not communicating better with the elected officials and the community,” said Jones. “The councilman is concerned about the reduction of hours and about the available resources for teens and youth in the community.”
Jones said Our Time Press was the first to tell him about the elimination of the ceramics class.
Councilman Vann will meet sometime this week with the Parks Commissioner and his staff to find a suitable resolution to the issue, Jones said.
A Parks Department Spokesperson said the reduction of hours comes after the agency observed a low volume of attendance at the cultural center, particularly in the evening.
“Going forward, we are engaging in dialogue with local elected officials to evaluate strategies to most effectively meet the needs of the community,” the spokesperson said.
The Parks Department would not respond to any inquiries if other cultural or recreation centers saw a reduction in hours citywide. They also did not respond to any inquiries regarding any other ceramic programs citywide.
The move, however, did not surprise Mary Von King, the widow of community activist Herbert Von King, for whom the park is named.
“I don’t think it (reduction of hours) is a good idea,” said Mrs. Von King. “But the Parks Department does what they want to do. (Editor’s Note: Michelle Veal, Our Time Press journalism intern, contributed to this story.)