Chris Banks Challenges Incumbent Inez Barron on Jobs, Has No Job Plan of His Own 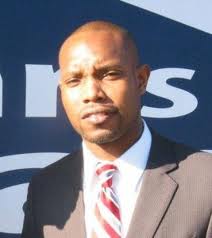 Chris Banks is challenging incumbent Assemblywoman Inez Barron on her record of jobs and developing relationships that Banks said could help foster improvements in the district. “ENY is facing a high unemployment rate,” said Banks. “My opponent has no plan to bring jobs to our community.” When asked if he has his own jobs plan for the district, Banks responded: “I don’t have a written plan. We are working on something.”
During an OTP interview in June, Banks promised to issue a written jobs plan by the end of July. “We will produce a plan and present it by the end of July,” he said. As of the second week in August, the paper has received no plan. A statement from Banks’ campaign manager Vanessa Hughes said, “The Job piece is ready and it will be released through a press release from the campaign… We are still working on a date… you will be the first to get a copy.”
The East New York section of Brooklyn is a living contradiction. As new multifamily housing units surround the flourishing Gateway Mall, other areas of the 60th Assembly District are overwhelmed with poverty, disease, crime and unemployment. Chris Banks, the 27-year-old founder and executive director of East New York United Concerned Citizens, provides an array of services to the young and the elderly in ENY through his not-for-profit. He is a member of Community Board #5 and president of his block association. When asked why he decided to run, Banks said simply, “We need new leadership in the community.”
Banks has a litany of complaints about the incumbent’s representation of the district; chief among them is a lack of resources. “On the Assembly level, we haven’t gotten as much resources as needed coming from the current state assemblywoman. We haven’t gotten any member items,” said Banks. “Nothing.”
Banks seems to think the district can obtain member items through the magic of relationships while acknowledging fiscal and executive constraints. “The governor has put a stop to a lot of member items, nevertheless, I think through relationships that can be fostered and built through the assemblyperson or any elected official, we should be able to fund certain programs if those relationships exist,” Banks said. “I think through her inability to foster those relationships, the district has suffered with bringing resources in and bringing money to support our organizations that are in dire need of help.”
Charging that suffering in the district is directly attributable to how the Barrons relate to other people, Banks said. “I hate to say it, but the Barrons have a history and record of being controversial, of being radical, and not being approachable. Because of their rhetoric, it keeps people away. And it has hurt the community. There are a lot of opportunities we could have had that could have benefited the community.”
“As the executor of ENY United Concerned Citizens, I built relationships,” Banks added.

Banks also alleges the community missed opportunities during Barron’s tenure. He pointed out the assemblywoman’s vote against the “Millionaire’s Tax” last December, the only member of the Central Brooklyn Assembly delegation to do so. Banks is referring to a comprehensive package of tax amendments that also included appropriations for summer youth work, funds for programs to help people going through foreclosure. That vote was “against the community’s interests,” said Banks.
Underneath Chris Banks’ complaint about jobs is his view that Wal-Mart is an opportunity for the Gateway expansion, as well as NYC, despite the company’s track record across the country for tax-dodging, union-busting, gender discrimination and paying employees wages so low that they qualify for food stamps, Medicaid and housing subsidies.
“One of the things we could have done to create jobs as a legislator is look at the land developed by Related Companies. There were potential tenants to bring jobs to the community. We missed a golden opportunity to negotiate with folks,” said Banks. “Wal-Mart was a potential candidate. So were JC Penney and ShopRite.”
Banks said he doesn’t “want to make this election about Wal-Mart.” But it is about Wal-Mart. “We had a golden opportunity. This would have been the first time Wal-Mart would have come into NYC,” Banks said. He acknowledges Wal-Mart’s “major issues with labor violations.” He said he is “in support of a living wage for part-time and full-time workers.” And he believes “any employer that comes into Gateway or ENY must pay a living wage.” But Banks said, “we must have a dialogue,” as if any dialogue with a local community will impact Wal-Mart’s predatory corporate policies.
OTP reminded Banks that the City Council held hearings and invited Wal-Mart. They didn’t come. And when Related and Wal-Mart were invited to a meeting of Community Board #5 of which Banks is a member, they didn’t show up. “How are you going to have a dialogue with no-shows?” OTP asked.
“I agree. They haven’t been open to have talks with us even though the community is open to talks. I find that egregious,” said Banks. “If you want to come into our community and be a partner with us, you need to sit down and talk.” Banks couldn’t resist adding another dig at Barron. “But the assemblywoman has no plan.” OTP asked, “How do you know she has no plan?” “Because they said no to Wal-Mart or any of the other tenants that could come,” said Banks. “There has been no alternative presented.” Pressing further, OTP asked, “Isn’t Wal-Mart saying no? If you are going to accuse the sitting assemblywoman of not producing dialogue, couldn’t the same be said of Wal-Mart and Related or any of the other companies?” Banks responded, “She is the elected official. Her job is to help the community and she hasn’t done that.” One more time OTP asked, “If Community Board #5 or the City Council couldn’t respectfully compel Wal-Mart or Related to come, how is it one assemblyperson’s fault?” Banks answer: “She has made no attempt that I know of to produce a plan to bring jobs.”
At that point, OTP asked again, “Where is your plan to create jobs?”