When you see young eighth-grade boys and girls, I’m sure you don’t think he/she could be a prostitute. But the reality is that more and more an increasingly amount of children are being employed in the sex trade in New York and other major cities around the world. Child Prostitution has been a global issue for years and is starting to strike closer to home many believe.
Often called a melting pot, New York is well-known for its diversity in culture and race, and this same diversity is reflected in the prostitution sector of New York. This goes for the customers, prostitutes and pimps. Mia Spangenberg said in her report on prostituted youth, that reports and research on young prostituted females shows over eighty percent of the girls were African American, fifteen percent were Latino and two percent were white. Spangenberg went on to state that the majority of sexually exploited youth are runaways or castaways from dysfunctional homes where they suffered physical, psychological and sexual abuse. These runaways come from immigrant families, whose traditional practices clash with their child’s American culture. For this reason, in 2001 John Talmadge, the Chief of Staff for City Councilman Kenneth Fisher at the time, claimed that the largest growth in runaway children is from immigrant communities.
There are as many as 400,000 prostituted children in the U.S., and often 45,000-50,000 are smuggled in to work in prostitution. In New York City, Susan Breault of the Paul and Lisa Program, estimates that there are roughly five thousand youth and children in prostitution. As the numbers in prostituted children increase, the ages of child prostitutes decrease. New York Police Detectives Kevin Mannion and Jim Held have found that young boys and girls start selling sex at eleven or twelve, and by the time they are fourteen or fifteen years old, they are already pros in the business.
Child Prostitution is the commercial exploitation of children. The End Child Prostitution, Child Pornography and Trafficking of Children for Sexual Purposes-USA (ECPAT-USA), a nonprofit children rights organization, says the underlying causes of child prostitution are diverse and include war, natural disasters, economic injustice and discrimination. It is a multi-million-dollar business that has been well-organized into an industry with clients, traders, distribution routes and outlets, originating partly as a response to the demand from tourists.
Pedophiles, pimps and perverts have been and are now traveling abroad to developing nations where children are isolated and vulnerable because of broken homes and are kidnapped or lured by traffickers with promises of employment and instead are working the streets of New York.
Every sixth job in the world is somehow dependent on or relating to tourism. Tourism, it seems, provides easy access to vulnerable children, and according to ECPAT, many U.S.  travel agencies set up tours for thousands every year. Added to the world becoming smaller because of advancements in travel, the advances in technology today are creating challenges to solving the problem also.
“The world has shrunk,” said Carol Smolenski, executive director of ECPAT- USA. At ECPAT headquarters in Brooklyn Heights, Ms. Smolenski said that globalization plays a vital role in the trafficking of children which enables child prostitution, because families  have missed the flow of money that comes with foreign direct investment. Foreign Direct Investment is an economic policy promoted by the United Nations’ committees and international finance organizations that encourages private sectors to invest and create markets in order to provide jobs and money for the nation. Children  who “missed out” on the flow of money  get desperate, and desperate children  are the targets of pimps.
When asked if the public needs to do more, Ms. Smolenski said that even though things have changed in the past few years, a push for more legislation on the topic needs to be done, especially in New York. As of now, the Safe Harbor Act is on the floor in the New York Senate that would not prosecute child prostitutes and work with them. “If a girl wants to leave her pimp tonight she has nowhere to go,” Smolenski went on to say. There are no shelters in New York City for the sexually exploited, and the sexually exploited are prosecuted even though they are being forced to prostitute. There is no way out for the masses. 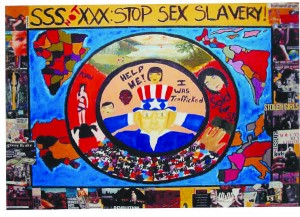 Demetrius Lemus, 37, of New York City, was caught in the fall last year for operating a prostitution ring operating from 1999 through 2005 in various cities, including New York City, by the FBI under a program called “Innocence Lost”, which is a cooperative effort to prevent and prosecute cases involving child prostitution between the FBI, the Criminal Division’s Child Exploitation and Obscenity Section, and the National Center for Missing and Exploited Children. In 2006, the initiative has resulted in 228 open investigations, 543 arrests, 86 complaints, 121 indictments and 94 convictions in both the federal and state systems. This initiative is a response from the government in the wake of the growing amount of children being trafficked and prostituted.
May 30th, 2007 ECPAT-USA carried out its awareness outreach program that involves high school students from all over Brooklyn. The program designed by the students, promoted awareness of child prostitution, child pornography and child sex tourism in the form of art.
There are major leaps being done on an international, national and local stage to eradicate child prostitution but more work and more education on the subject is needed to combat the problem. But since there is very little information, awareness of the subject should be the priority of the public.