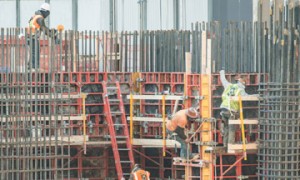 For Ed Brown, whose Team Brown Consulting firm has landed several people from NYCHA’s Ingersoll Houses in construction jobs, the City Point project is a textbook example of what the massive 2004 Downtown Brooklyn rezoning plan was supposed to do for people of color in the surrounding community.
“When I got the chance to work on that (City Point) project, I saw the void people of color don’t get in opportunities to work on construction projects,” said Brown, the former president of the Ingersoll Houses Tenants Association. “This is having a direct impact on the community. I have young black men that have come to me with tears in their eyes saying I actually saved their lives with getting them work.”

Besides local construction opportunities, City Point is the first project stemming from the 2004 rezoning with a large component of commercial space.

Upon completion of the second phase of the project currently underway on the former Albee Square Mall site on city-owned land, there will be 1.3 million-square-foot broken down into 680,000 square feet of retail space and 680 units of housing including 125 units of affordable housing for moderate-and low-income residents.

Tom Montvel-Cohen, spokesperson for City Point developer Albee Development LLC, said (from the onset) there has been a commitment to maximize local and minority contracting and employment.
“To date, over 50 percent of contract dollars have been awarded to local and minority-owned businesses. Over 80 percent of construction employees are members of minority groups,” said Montvel-Cohen.

The project, in which phase one is already completed with the opening of Armani Exchange on the Fulton Mall, will ultimately include anchors such as New York City-based retailer Century 21 and the seven-screen Alamo Drafthouse Cinema.

City Point is the first type of job generating development that the late City Councilman James Davis foresaw when he supported the Downtown Brooklyn rezoning.

“James knew there was a lot of people from the surrounding community that wanted work and he supported the rezoning because (in part) he thought it would give them the opportunity to find work,” said James Caldwell, who worked closely with Davis and formerly headed BUILD (Brooklyn United for Innovative Local Development), which was instrumental in landing people of color jobs in the Atlantic Yards project.

Among the local contractors at City Point include Martin (Ab) Allen, whose company, PPEE Construction, is on 790 MacDonough Street in Bed-Stuy. PPEE presently employs 38 people from the Farragut and Gowanus Houses as well as residents from Brownsville, Bed-Stuy and Bushwick.

“Back in 2000, we started doing construction training classes for free for people living in Farragut-Ingersoll and Bed-Stuy,” said Allen. “We arm local people with things they need to know so when developers come in the area we have people that know how to put up sheet rock, or do welding, painting, carpentry and plumbing.”

Allen said a number of his employees are considered “hard to employ” people such as ex-convicts and those in the shelter system, as well as longtime out-of-work residents looking for gainful employment with good wages.

“We try to guide people into things they like because if you like something it’s easier to want to go do it,” said Allen. “In the case of City Point, we’re not ready yet to do a whole 30-story building, but we are equipped to do five floors including the windows, sheet rocking, flooring and framing. City Point is reaching out to the community and the community is for everybody.”