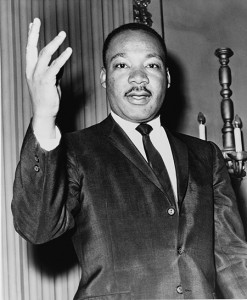 Community Celebration of Martin Luther King, Jr. at Brooklyn Academy of Music, Monday, Jan. 18
Acclaimed Scholar Michael Eric Dyson is Keynote Speaker
The life and legacy of Martin Luther King Jr., the Nobel Peace Prize-winning Georgia-born Baptist minister, social activist and scholar, who led the Civil Rights Movement in the United States from the mid-1950s until his death by assassination in 1968, will be celebrated at the Brooklyn Academy of Music, 30 Lafayette Avenue, Monday, January 18, starting at 10:30am, promptly.
This year’s festival of academic and cultural arts events includes, among other offerings, an array of speeches highlighted by an address by the distinguished scholar and influential public intellectual Dr. Michael Eric Dyson; music performances by such stellar artists as the gifted Kimberly Nichole, “The Voice” of the entertainment world; a free movie screening of an acclaimed work, “The Black Panthers: Vanguard of the Revolution,” by director Stanley Nelson, and an art exhibition featuring the work of children from a public housing development under the guidance of acclaimed Brooklyn artist Che Baraka (“The Magician”).
Now in its 30th year, the event is presented by Eric Adams, President of the Borough of Brooklyn; Rudy Crew and Medgar Evers College of The City University of New York and the Brooklyn Academy of Music. It is New York City’s largest public celebration in honor of Dr. Martin Luther King, Jr.
Heirs of the King, Offspring of The Dream …
Picture the Dream, presented Jan 15—Jan 18, 2016, is a community art exhibition featuring original Dr. King-inspired work by students from the University Settlement Atlantic Terminal Community Center. Presented by BAM, the exhibition culminates a series of free art workshops. The Exhibit is on view January 15 & 16 during BAMcafé Live and January 18 from 1—6pm.

Che Baraka, Artist and Art Educator
***
Seattle-born Singer-songwriter-actress Kimberly Nichole actress came to national attention in 2015 for her appearances on season eight of NBC’s reality competition series The Voice, placing sixth place. The She started singing as a toddler and learned to play the clarinet at age 10. She starting writing her own songs during her teenage years and pursued a degree in economics and human resources at Georgia’s Spelman College.

Kimberly Nichole, Queen of “The Voice”
***
The Black Panthers: Vanguard of the Revolution, directed by visionary documentarian Stanley Nelson, is this year’s film presentation on Monday, January 18 at BAM’s Rose Cinema at 1:00pm. The award-winning film surveys the history, ambitions, and legacies of the Black Panthers, combining archival footage with interviews, shedding light on an under-explored dimension of US history.
***
Dr. Michael Eric Dyson, an American Book Award recipient and two-time NAACP Image Award winner, was named one of the 150 most powerful African-Americans by Ebony.
Currently a professor of sociology at Georgetown University where, in 2011, he received widespread attention for his course “Sociology of Hip-Hop: Jay-Z,” Dr. Dyson has taught at Brown University, the University of North Carolina at Chapel Hill, Columbia University, and the University of Pennsylvania. He is also a contributing editor of Time magazine and he hosts The Michael Eric Dyson Show, an hour-long news and talk program on NPR. His pioneering scholarship has had a profound effect on American ideas. He is the author of Reflecting Black: African American Cultural Criticism; Making Malcolm: The Myth and Meaning of Malcolm X; I May Not Get There with You: The True Martin Luther King, Jr.; Holler if You Hear Me: Searching for Tupac Shakur; Come Hell or High Water: Hurricane Katrina and the Color of Disaster; Is Bill Cosby Right? Or Has the Black Middle Class Lost Its Mind?, which was a New York Times bestseller; and April 4, 1968: Martin Luther King Jr.’s Death and How It Changed America, also a New York Times bestseller. His most recent book, Can You Hear Me Now? The Inspiration, Wisdom, and Insight of Michael Eric Dyson, offers a sampling of his wit, thought, and eloquence on the enduring problems of humanity, from love to justice, and the latest topics of the day, including race and the presidency.

Note to readers: Our Time Press encourages parents, guardians and caregivers to bring school-age children to hear the messages presented. Very early arrival is recommended for this event which is free to the public and annually commands a packed house. – Bernice Elizabeth Green