Celebrating the Life of the Prolific Playwright Ntozake Shange

In 1976, when I was 12 years old, my Home Economics teacher (Mrs. Dunstin) took the Home EC Club to see Ntozake Shange’s #Obie Award-winning play, “For Colored Girls Who Have Considered Suicide When the Rainbow is Enuf,” when it opened at the Booth Theater in 1976. Afterwards, she took us to eat at the then-famous restaurant, Jack’s Nest Southern Kitchen. Boy, am I telling my age with that throwback?! Anyhow, that was one of the most memorable days of my young life because it was my first time ever going to a Broadway play. But it wasn’t until the 1990’s when I was real, real grown and saw “For Colored Girls” the second time at City College’s Aaron Davis Hall. Did I understand the significance of the seven female characters in the #Emmy-nominated play? I became a fan!! 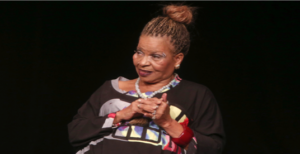 So, when I got a call from my celebrity makeup artist (Tanika Green) in advance of the media, early evening, Saturday, October 27, 2018, that the prolific playwright Ntozake Shange had died at age 70 in an assisted living facility in Bowie, Maryland, I was stunned. We tend to live a bit longer these days, so her death seemed unexpected. However, it wasn’t until the next day when I learned that Ms. Shange had had a couple of strokes over the last 10 years that left her in fragile health. She’s survived by her daughter Savannah Shange, sisters Ifa Bayeza and Bisa Williams, and brother Paul T. Williams, Jr.

A little-known fact about Ntozake is that she’s a Jersey girl like me, who was born in Trenton on October 18, 1948 as Paulette Linda Williams. In 1971, she changed her name to Ntozake Shange. In the South African language Xhosa, Ntozake means, “She who has her own things,” and Shange means, “He/she who walks/lives with lion’s pride.” Her new name was her inspiration and the reflection of her family’s involvement in the #CivilRights Movement, which also sparked her feminism and unyielding commitment to championing causes of Black women and girls. One of my favorite quotes of hers is, “When I die, I will not be guilty of having left a generation of girls behind, thinking that anyone can tend to their emotional health other than themselves.”

Ntozake Shange is one of the pioneers of the Black Arts Movement. She was a spoken word artist, novelist and playwright who morphed into an actress. “For Colored Girls” is more than simply a play about seven Black female characters named for the colors of the rainbow, it’s coined a choreopoem because it tells the story of personal trauma and abuse experienced by Black women through combining poetry, dance and music. In 1982, she starred in the American Playhouse production of “For Colored Girls” on PBS, co-starring Alfre Woodard and Lynn Whitfield, and in 2010 Tyler Perry directed a film adaptation featuring a star-studded ensemble cast: Whoopi Goldberg, Phylicia Rashad, Anika Noni Rose, Kerry Washington, Janet Jackson and Kimberly Elise. For those of you who know me, know that I was at the movie theater to see it on opening night. OK, for full disclosure, I have never read the book For Colored Girls. I know, weird right?? I have asked myself a million times why won’t I read the book. The only thing that I can think of is reading those emotional monologues in the book is probably ten times more disturbing than watching on stage and screen; I’m just not ready for that.

Race and Black Power were popular themes in her work. While #NtozakeShange has won over 25 awards and honors for her published poems, novels, children’s books, essays and plays, I think it’s apropos to celebrate her life because her Black feminist efforts of her time blazed the trail for today’s #MeToo and #TimesUp movements. May she #RestInPower.

Lisa Durden is a TV personality and subject matter expert in the areas of pop culture, politics and social issues. She’s an “A-Plus Panel” Contributor on My9’s “Chasing News.” Ms. Durden is also an award-winning director/producer in film & TV.  In 2005, she launched Lisa Durden Unlimited Productions, a multimedia company headquartered in Newark, NJ. She #KeepsTheCameraHot!! #ClapForThat!!