Celebrating An Educator Through The Eyes of His Heirs

On Friday, December 13, 2013, 5th grade students of P.S. 256/The Benjamin Banneker School assisted in the salute to one of our heroes, Mr. Albert Vann, the long-time politician, pioneer education advocate and son of Bedford Stuyvesant, who started out his career more than four decades ago in the field of teaching.

In celebration of Mr. Vann’s outstanding service and commitment to education, the principal, Sharyn Hemphill organized a tribute which included the dedication of the P.S. 256 library and renaming it to Councilman Albert  Vann Library.

The morning celebration was held in the library and included music, drums, reading and special messages about Mr. Vann’s work.  It also included presentations to Mr. Vann, speeches by noted community leaders and the unveiling of a photo copy of the plaque to be placed on the library door.

Following the ceremony, the Student Council discussed their feelings and thoughts about the event.

At the dedication, many people came. Mr. Vann’s brother Charles Vann, his best friend Joan Eastmond and some of our community leaders, like Renee Collymore were there.  They all grew up in Brooklyn.

We learned a lot about Mr. Vann. He was a fourth grade teacher at P.S 256 for one year from 1959 to 1960 and he has done so many things for the community and for children.

If you want to be like Mr. Albert Vann, just keep on keeping on and walk tall.

We also learned from Mr. Vann. He told us that before he became a teacher, he was in the military. By the time he finished one year at P.S.256, at dismissal his students walked from the second floor down to the first without talking or making noise, without him.

The students were quiet and stood up. He said he was NOT afraid of the children because he had been in the military.

We also learned that our principal Ms. Hemphill taught Mr. Vann’s two daughters.  One of the daughters=, Binta D., attended the celebration, and she read something special she wrote at the dedication.  Other guests were CEC director David Goldsmith, Robert Cornegy and District Leader Renee Collymore.  She came to our school recently for our elections. She came back to attend the dedication of the P.S. 256 school library to honor Mr. Vann. She told us to do our best and listen to our teachers.

The dedication happened in Bedford-Stuyvesant where the school is located and where Mr. Vann was born and raised. The event took place in the library which is now called Councilman Albert Vann Library. We did not know that education is Mr. Vann’s first love. Everyone had a great time and thanked the principal and the students.  The school was asked to be part of Mr. Cornegy’s inauguration on January 4 that will take place at Bed-Stuy Restoration on January 4, 2014.

In addition to special guests Oma Holloway, Renee Collymore who is the district leader for the 57th district, Robert Cornegy who is the upcoming councilman, Joan Eastmond who covers the community and education for Sen. Montgomery’s office, David Goldsmith and many others, there were people from Mr. Vann’s office including: Ms. Sparkle Davis, who is Mr. Vann’s scheduler, and Dynishal Harris who is his chief of staff. 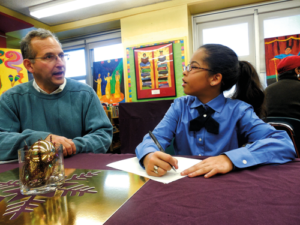 The president of the student council Samantha Mebane gave a speech about Councilman Albert Vann.  She mentioned how Mr. Vann has served his Bedford-Stuyvesant community and Crown Heights for many, many years. Mr. Vann gave a speech about his career and how his career started. Mr. Vann told the story about how he was warned about his new class. He said he wasn’t scared because of his military background. Mr. Vann said he could tell his class to go from the second floor to the basement and stand there quietly. He said that he had disciplined the kids. Mr. Vann received an award from his friend, 256 principal Ms. Hemphill. Mr. Vann spent time with all the students and took many photos. Mr. Vann told me that as a teacher you can’t have a favorite subject because as a teacher your job is to help the students learn as much as they can. Also Ms. Hemphill taught Mr. Vann’s daughters Benita and Binta.

Albert Vann loves to make things better.  He is very truthful and intelligent.  Albert Vann is a great man who has served Bedford Stuyvesant in his Bedford-Stuyvesant community and Crown Heights as an educator and elected official for many many years.  Robert Cornegy is taking Albert Vann’s spot as Councilman.  Albert Vann loves our school and our school children.  He helped formed the first organization for African American teachers in Brooklyn more than 40 years ago. 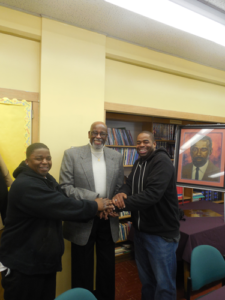 “Al Vann remains an inspiration to all fighting for quality education for our children. It is so fitting that the children of PS 256 will come to know about Al Vann and his work for social justice and education every time they visit their school library. What a moving ceremony. You could see the kind of guy CM Vann is by the way he chose to focus and interact with the children in the room. Like he said, “Once a teacher,  always a teacher!”

– David Goldsmith, President, Community Education Council for District 13 (CEC 13)  in Brooklyn, NY, in an email to Our Time Press, Dec. 15.