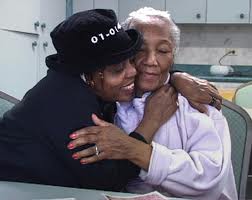 Being a care giver is an awesome responsibility.  As baby boomers, many of us are faced with the challenge of dealing with family dynamics that can run the gamut of possibilities.  Each family has its own personality and distinct individuals.  My grandmother, Ophelia Young Wallace, was the matriarch of the Wallace Clan. She was born in South Carolina.  Her mother, a freed chattel slave, died when grandma was eight years old.  Grandma’s elder brother, Uncle William, brought her to Florida and raised her.  Grandma had four children.  My mother Juanita Wallace Watts, was the eldest and last survivor of her siblings.    My grandmother retired several times but remained active until her illness at age 85.  My mom took care of her even though she was ill.
Mommy was diagnosed with M.S. in 1976 after ten years of physical deteriorating complications.  Her leg would give away when she walked up the street or boarding the bus.  She had trouble controlling her bladder.  Her vision worsened.  Her first serious hospitalization took place in 1976.  Being the eldest, it fell on my shoulders to monitor mommy’s progress.  Visiting hospitals, doctors, clinics, that responsibility was on me.  When the diagnosis was finally made, it was decided that she should resign from her employment.  She could no longer stand for extended periods of time.
The next step was to investigate how to secure an income and medical coverage.  Social Security Disability was our first venture.  She is a widow of a deceased veteran, so she is entitled to a benefit which is the grand total of $53.00 monthly.  She has not received one cost of living increase in all this time.  We next needed medical coverage.  She had received H.I.P. coverage while she was employed; to maintain that we had to apply to New York City Medicaid.  Documentation was submitted and yearly these same papers must be resubmitted  for reauthorisation.  Although she received Medicaid, she was not eligible for food stamps.  She earned too much money.