Cardi B is “Making Money Moves” … With Gen-Xers & Millennials

Born Belcalis Almanzar on October 11, 1992 in the Bronx, New York, Cardi B grew up a wild child. Although she looked like a nun in high school, she was far from it.

At the age of 16, she was a member of the Bloods street gang and going nowhere real fast. 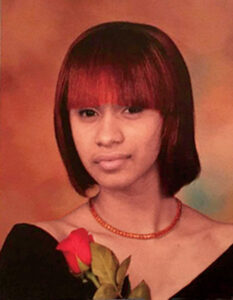 When she was 19, Cardi B worked for two seconds at a local Manhattan supermarket before getting fired, then landed on a stripper pole as an exotic dancer in a hood club, in hopes of making enough money to escape poverty and her abusive relationship.

Although stripping is a perfectly legitimate, legal profession, it’s not perceived by most as a successful career move. Don’t judge! Everybody counted Cardi B out until she went viral as an #Instagram influencer, reaching over 17 million followers with her larger-than-life personality, unapologetic foul mouth, sharing a healthy dose of her X-rated sexual exploits, dropping F-bombs and throwing shade at the haters. The girl had zero filter. She didn’t just #SpillTheTea, she spilled that strong Lipton Tea with sour lemon. Now, Cardi B is “making money moves” with Gen-Xers and Millennials. #ClapForThat!

Let me break it down for you. Generation-Xers were raised to believe if you go to college, it was your way out of the ghetto. That sounded cute in theory, but we found out it was a big fat lie. The fact of the matter is, many of us graduated from college and landed right on the unemployment line or in a “go nowhere job,” which is why there was an exodus of Gen-Xers who left Corporate America in our thirties to start our own businesses in search of empowerment. However, the Millennials didn’t buy into the #WACK notion that the only road to success is through obtaining a degree and getting a 9 to 5 J.O.B. They see their ideas and skillsets as intellectual property with a high price tag attached.

This common denominator is why we all love Cardi B like a fresh fruit salad. She gives us life because she is the poster child for making it out of the ghetto on her own terms. She was uneducated! She was the underdog! She was dismissed! She was broke! But as my mother would say, “She ain’t beg nobody for a piece of bread”. Almost overnight, Cardi B became an Internet celebrity and made big “schmoney” by brilliantly sharing her arrogance and confidence on social media. Hilarious lines like, “People be talking like strippers don’t be working hard and sh@t, like that’s some easy job, but you b@tches can’t walk a whole entire block with heals on and we be f@cking doing splits and somersaults for hours in them shits….HOURS”, are classic Cardi B.

Cardi B’s days of dancing in high school talent shows served her well as a stripper because she wasn’t just an exotic dancer, she was an entertainer. She was known as a “garbage bag girl”; she made so much money stripping it had to go in a garbage bag because it wouldn’t fit in a dance bag.

However, stripping was a means to an end, so she fixed her teeth, did a little nip and tuck and made some radical moves toward her rap career. Cardi B didn’t just dream, she took initiative! People try to trash Cardi because she doesn’t speak the king’s English, but you have to give her her props, she set a whole lot of folks all the way straight when she tore up social media with her popular kitschy content; amassing $4.5 million in media value.

As they say, “Build it and they will come”. In 2015, Mona Scott-Young, the creator of VH-1’s “Love & Hip-Hop: New York”, said ka-ching when she learned of Cardi B’s viral Vine, over 17 million #Instagram followers and over 2 million #Twitter followers, so she sought her out and signed her on as a regular cast member of the popular show.

Of course, Cardi B killed it!! She became a huge reality TV star and the first female rapper to top the U.S. Billboard chart since Lauryn Hill in 1998 with her single “Bodak Yellow”. Cardi B is making money moves by signing a major recording deal with Atlantic Records, launching her Steve Madden shoe collection and her upcoming 2018 tour dates, including, as recently announced, hitting the road with Bruno Mars for his Grammy-sweeping “24K Magic”.

Generation-Xers and Millennials are feeling Cardi B because she’s real! Her truth is her brand! My favorite “Bodak Yellow” lyrics are, “I ain’t got no time to chill. Dropped two mixtapes in six months what b@tch working as hard as me. I’m a boss you a worker b___.”

In other words, don’t come for her unless you are grindin.’