By Bernice Elizabeth Green (Text and Photos)
In this digital world, you would not expect a Fortune 500 company to be attuned to old-school forms of communication. 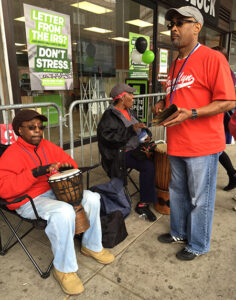 But the djembe, cowbells, horns, chants, with the voices of mothers and children

at the Verizon building located at Flatbush Ext./Fulton Intersection are sending a message from striking Communication Workers of America to pedestrians and drivers along the Flatbush Extension to and from the Manhattan Bridge and throughout Downtown Brooklyn.

And they are being heard.  The response to the CWA members’ fight for better benefits and compensation in the face of the company’s reported huge profits is a cacophony of honks, applause and cries of support. According to Job and Hire, “more than 35,000 employees went on strike last Apr. 13” and “employees’ protests and picket lines (have) stretched across the Northeast”.

On this page are just some of the “voices” walking the line near Verizon headquarters at 395 Fulton Street, and the biggest chanter is from 7-year-old Cory Ballard, who is enjoying the school break.  BG 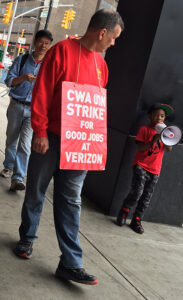 “We are on strike because we will do whatever it takes to create a better workplace for ourselves and those that follow.

“We’re standing together to make sure the needs of working families are met, instead of standing by as a handful of individuals get richer and richer.

“We’re standing together because Verizon has fired, threatened and intimidated working people at Verizon Wireless who are trying to create a better future for themselves and their families.

“We’re standing together because we want to earn a living in our own communities instead of moving away from our homes and our families for months at a time. We want good jobs to stay in the United States, not be sent overseas.

“We’re standing together to make sure that working people at Verizon cannot just make a good living, but also have a good life.” www.cwa-union.org

In an April 13 PR Newswire release, Verizon said:  “Despite Verizon’s good-faith efforts to get to new labor contracts, CWA and IBEW leaders, unwilling to make an agreement or even seek the assistance of the Federal Mediation and Conciliation Service (FMCS), have called a strike ….  Verizon has activated its business continuity plans as customer service remains the company’s top priority.

For the past 10 months, Verizon has tried to reach agreements for the company’s 36,000 wireline associates in the East.  While the company has (on the table) proposed wage increases, continued retirement benefits [including a generous 401(k) match] and excellent health care benefits, union leaders decided to call a strike rather than sit down and work on the issues that need to be resolved. “

“It’s regrettable that union leaders have called a strike, a move that hurts all of our employees,” said Marc Reed, Verizon’s chief administrative officer. He also said in the announcement, “Since last June, we’ve worked diligently to try and reach agreements that would … make the wireless business more successful now and in the future.  Unfortunately, union leaders have their own agenda rooted in the past and are ignoring today’s digital realities”.

Trump Is Playing the China Card. Who Believes Him?

President Barack Obama’s Commencement Address to the Class of 2020 HBCU Scholars, Saturday May 16, 2020