“When we got to the hospital the first thing was to see patients.  Some of them were crying and screaming.  We were working since then, nonstop,” said Poucheralph Salomon, a member of the 44-person medical delegation of the Bedford-Stuyvesant Volunteer Ambulance Corps that was on the ground Saturday after the Tuesday earthquake.   “I’m a Haitian immigrant who came here in 1998, and I’m an American and I was proud to get down there and be able to help my people.” When they slept it was on the floor of a nearby house and then they were back surrounded by the sounds of pain and the smell of blood and death, giving their food to the patients. “I feel like I’m still in Haiti right now.”

Mr. Salomon was speaking in an interview after a press conference welcoming the returning volunteers, and introducing the second wave of volunteers going to Haiti.  At the conference Congressman Ed Towns said, “I was watching television and when the Bedford-Stuyvesant Volunteer Ambulance Corps marched off the plane I had such a fantastic feeling that Bedford-Stuyvesant was there.”  The congressman said he thought back to when he first met with Commander Rocky Robinson when Robinson was working out of the second floor of an abandoned building that was next to the current location.  “I remember when I went up to that second floor and it was raining inside the building.  When I left I said I’m going to help him but that man must have lost his mind to go into a building like that and talk about starting an ambulance corps.”

Acknowledging the power of a dream, Towns said, “As a result of your involvement here in Bedford-Stuyvesant,  Bedford-Stuyvesant went to Haiti and saved lives.  Within 24 hours, they delivered 23 babies. They were able to relieve pain and suffering.   This is what it is all  about – people who help people.”

After the press conference Robinson spoke to the congressman of the kind of work they are doing in Haiti, saying of a CNN report, “They showed our dog, we have a dog, Cassius, named after Cassius Clay before he became Muhammad Ali, and he discovered the man in the hole.  And that’s our people pulling him out.  So we’re not only in the hospital, we have a small rescue team that’s saving lives.” 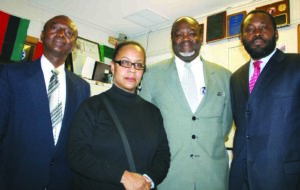 Dr. Roger St. Louis, one of the second wave of volunteers headed to Haiti as a member of the Ambulance Corps, said that the medical care must continue or more will die.  “Here’s the reason why.  We need orthopedics, anesthesiologists and surgeons on the first blow, and now it’s infections that are going to spread and kill people.”   Dr. St. Louis  emphasized the need for ongoing care, and the risk of gangrene setting into untreated wounds.

“They need antibiotics, they need an arrangement where they can heal.  We believe that our first need will be healing the wounds and healing the infections.”
Another volunteer is Khadijah Shakur, a registered nurse since 1986.  A specialist in obstetrics and orthopedics, Shakur couldn’t sleep well in the aftermath of the quake. “So when I heard that the Ambulance Corps was looking for volunteers, I immediately came.  I felt I have to help my people.”  Even though she will be leaving soon, Khadijah says she is “restless and anxious because there are things that are needed down there.  Infection is running rampant and we need to be there and lay hands on these people.  They need doctors, nurses and physical therapists.  We have to get on the ground to help our people out.”

Volunteer Dr. Gaston Valcin emphasized the emotional and psychological support  that is also needed.  “The Haitian people need counseling because so many are in shock right now.”  Asked how they could give up practices and go,  Dr. Hans Garry Torlan  said, “We’re natives of Haiti.  Haiti is our heart.  We put everything aside.”
Also, said Dr. St. Louis,  President Martin of Kings County Hospital is giving “lots of leeway” and providing opportunities, including a department where staff can register to go help in Haiti.    “Kings County is helping 110% in this catastrophic problem.”

Looking over where the BSVAC has come in the last twenty-two years, Robinson said, “Before, we were only the EMTs and paramedics, and now doctors and nurses are coming on board because they believe in what we’re doing.   I get calls from as far away as Georgia and Florida.  We’re galvanizing the Haitian community, the Caribbean community, the African-American community and even the Jewish community is having a dance for us on Monday.  People are really getting on board, but we are the leaders.  We have to lead the way.”  David Mark Greaves