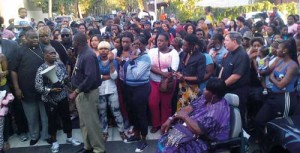 It was a shooting death that rocked an entire community used to shooting deaths. On Sunday Sept. 1, 16-month-old Antiq Henner was in his stroller with his parents when gun shots rang out. Though Antiq’s father – an admitted “supergang banger” with a lengthy criminal record – was the intended target, little Antiq was shot in the head and was rushed to nearby Brookdale Hospital where he died.

The shooter was 23-year-old Daquan Breland, who lived down the block from Antiq’s Marcus Garvey Houses residence. Daquan Wright allegedly gave the gun to Breland. After the shooting, both fled the state. On the day of Antiq’s funeral, Wilkes-Barre, Penn. Law enforcement found Breland and Wright at the residence of Wright’s sister who was also Breland’s girlfriend.

NYC detectives believe the shooting was in retaliation for a drive-by shooting that took place in July 2012 on Riverdale and Bristol.

Back at the Marcus Garvey Houses, the anger and outrage grew daily. Three days after Antiq’s shooting hundreds of women and children filled Bristol Street chanting “No shooting! No Babies!” as they marched toward the location of the shooting. The women are hurt and angry. But the women don’t seem to have yet processed how they can organize among themselves to address the situation.

The reasons are complex. The women give birth to and raise everybody, including the young men who are engaged in protracted retaliation shootings. These young men and their victims are the women’s sons, intimate partners, and baby daddys. The women and children are under siege and inundated with the gang culture surrounding them.

But there is hope. A few years ago in Columbia the women conducted a Lysistrata-type sex strike to firmly persuade their men to stop the drug-related gang killings. In Liberia the women actively confronted Charles Taylor and those engaged in that country’s protracted civil war. And most recently in India, the women took to the streets demanding prosecutions and more severe penalties for brutal public rapes. The shooting of Antiq might be the spark that ignites the women of Brownsville to engage in changing the violent culture of the community.

In the meantime, Brownsville’s male activists are doing what they can.

Daniel Goodine, a long-time community activist in Brownsville whose son was also killed in a senseless shooting said there used to be a street code: a person was given a pass when he was seen with his family and children. “The women are saying that was a cold m***** f***** who did that,” said Goodine. “The women are saying that he should have never shot at that baby. Everybody is saying the same thing. It was a punk move.”

Goodine explained further. “I don’t know if these cats have a code anymore,” said Goodine. “We allowed this to get out of hand. Somewhere along the line men didn’t take care of young men to tell them what was right and what was wrong. We had a code. Who passed that code down to these cats? Nobody apparently did because it happens.” Goodine may have pinpointed one of the problems. Nobody deals with the emotional life of young men growing up in Brownsville. “I hope that we can change the hearts and minds of people who think an eye for an eye. But self-preservation is law #1. It’s every man and woman for themselves.”

“We are in the process of trying to save some other people’s children so they don’t have to go through what that baby went through. There is a group of concerned members of the community from various developments who have been trying to bring the violence to an end,” said Anthony Newerls, CEO of the Brooklyn Blizzards Youth Organization. These men volunteer their time after work and during the dead of night to diffuse tensions before they erupt into violence. “Sometimes it takes going to the father of troublesome young men to help mediate problems or resolve issues,” said Newerls.