Black millennial Brooklynites MTV and Comedy Central comedian Franchesca Ramsey and Black Lives Matter co-founder Opal Tometi are speaking out about the 23 percent of Brooklynites who are living in poverty and the impact of volunteering, advocacy and philanthropy to make a positive difference. 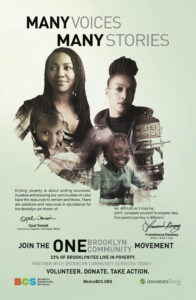 Ramsey, a former “Nightly Show with Larry Wilmore” contributor, will make history as the first Black woman to host a show on Comedy Central during the 2017-2018 television season. Already she’s a popular video blogger with over 29 million views on YouTube and the host of the hilarious MTV Web series “Decoded”, which tackles race, gender and pop culture. But, to the former Florida resident, gentrification in Brooklyn is serious business.

“When gentrification occurs people try to look on it as a positive thing. They say the neighborhood is getting better. It’s getting nicer–without realizing that the downside of it is that a lot of people living in the community end up getting pushed out,” said Ramsey. “How can we do it in a way that partners with the people that have always been there so they can also reap the benefits of a cleaner street or a safer neighborhood and without losing the people that have raised their families there and started their businesses there? The way to make our communities better is to make sure it’s better for everybody, not just one small section.”

New York-based Nigerian-American writer, strategist and community organizer Opal Tometi is a co-founder of the historic movement #BlackLivesMatter. The impact of this landmark project has landed her on leadership lists with media outlets like Fortune, POLITICO and TheRoot.

Currently, she is executive director of Black Alliance for Just Immigration, the leading Black organization for immigrant rights.

“The way to address poverty I believe we need a radical investment in our communities, particularly in low income and poor communities all across the Borough of Brooklyn,” said Tometi. “That can look like investing in a quality education system, affordable housing, jobs programs and transportation for folks that can’t afford it.”

Sponsored by Investors Bank, the ONE Brooklyn Community “Many Voices, Many Stories” subway posters spotlight a diverse group of notable Brooklyn residents who are advocates for an inclusive Brooklyn. The campaign has 26 notable Brooklynite ambassadors ranging from children to adults that represent media, culture, entertainment, interior design, fashion, cuisine, education and social justice activism. These ambassadors include Jocelyn Cooper, partner and co-founder of AFROPUNK; educator Nadia Lopez, principal/founder of Mott Hall Bridges Academy; and MSNBC’s Chris Hayes. The posters, which are on view at the BCS Web site, will be in many Brooklyn subway stations through the end of October. For more information, check out BCS on www.wearebcs.org.