Brooklyn DA Race Not Over, Yet 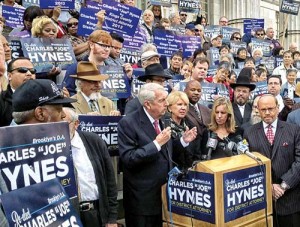 District Attorney Charles Hynes’ formal announcement to run for reelection on the Republican and Conservative lines was a raucous affair, despite the campaign event’s old-timey banjo music. Political supporters who waited half an hour for Hynes to arrive and when he did, his remarks were further delayed by a dozen dissenters who chanted, “Good-bye, Joe. Hynes must go!”

“As I continue my campaign for reelection, I urge Democrats, Progressives, independent voters to join with Republicans and Conservatives to preserve the public safety of Kings County for their families, themselves, their friends and neighbors,” said Hynes. “Reelect me as district attorney.”

Hynes said it was “palpably unfair” that 82% of Democratic voters who did not participate in the primary and voters from all parties “would be blocked in the general election on November 5th from choosing who their district attorney would be for the next four years. He characterized the low Primary Day turnout as “denial of the vote.”

“I further learned that Clarence Norman, Jr., the former Kings County Democratic Chair who I convicted of political corruption by extortion and sent to prison, ran Mr. Thompson’s ‘get out the vote’ campaign on Primary Day,” Hynes said. “I wondered what Clarence Norman, Jr. was doing running and managing a race for the Brooklyn District Attorney’s Office.” Hynes said Ken Thompson denied to a reporter that Norman was involved in any way in his campaign and that denial “was simply not credible.”

Hynes then declared, “I will do everything in my power to make damn sure that Clarence Norman, Jr. never influences the office of the Brooklyn District Attorney.”

The Thompson campaign denies that Norman played a role in his campaign. “This allegation about Clarence Norman is an outright lie,” said Thompson. “It’s a desperate move by D.A. Hynes. I’ve said repeatedly that Clarence Norman had nothing to do with my campaign.”

This writer asked Hynes about the seeming inconsistency: There are those of us who know that you have somebody working on your campaign who is a former felon who spent time in prison for causing serious bodily harm. That person has rehabilitated himself so much so that you feel confident to have him on your campaign. Why cannot any other person who has committed a crime – including felonies – rehabilitate themselves, do their time, then come out as a private citizen and support any campaign they want?

Hynes’ answer: “There is a profound difference between a dopey 17-year-old who does something really stupid, commits a serious crime, goes to prison, rehabilitates himself, becomes an ordained minister and someone (referring to Norman) who is one of the most powerful Democratic leaders in this state who is a serial thief and extortionist. Yeah, if Clarence Norman, Jr. came out and said, ‘I want to run political campaigns’, and if Thompson had the guts to say, ‘That’s my campaign manager’, I wouldn’t have an issue.”

But Norman was not Thompson’s campaign manager.

The irony is D.A. Hynes has many programs targeting African-Americans who have gotten in trouble with the law. Limited funding prevents access to all who may need reentry services. Hynes wants to expand these programs and make them available to all African-Americans coming out of prison. Is Norman not permitted to reenter society as a private citizen similar to other formerly incarcerated individuals who have served their time?