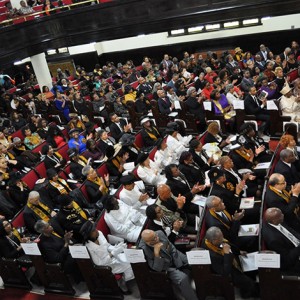 Last week’s celebration of Bridge Street Church’s 250th anniversary featured and address by one of the nation’s great speakers, The Rev. Dr. Cornell Brooks, a civil rights activist, attorney, minister, and leader of the NAACP as chief executive officer and the organization’s 18th president.

Dr. Brooks follows a long line of distinguished history-makers who have spoken at the church over the years.  They include:  U.S. Secretary of Commerce Ron Brown, Governor Mario M. Cuomo, Mayor David N. Dinkins, and the writer/composer James Weldon Johnson, author of the words for the African American anthem. “Lift Every Voice and Sing;” orator/human rights leader Frederick Douglass, and humanitarian, freedom rights warrior Harriet Tubman — whose passing is observed annually on March 10.

On Sunday, February 28, Dr. Brook’s remarks to the “august and distinguished congregation,” included an amazing “appreciation” to guests, visitors and the membership.  He started off with a nod to Rev. David B. and Valerie Cousin for their leadership, service, commitment and ministry. He then expressed appreciation to everyone present including, “all the preachers, stewards, trustees, choirs, the bishop – Presiding Elder Melvin Eugene Wilson, the NAACP board of directors, Dr. Hazel Dukes, president of the NYS conference, Karen Boykins-Towns, former NAACP Brooklyn chapter president, and L. Joy Williams, who currently holds that honor.

His list also included the precinct commander, all the members of the Judiciary, Senators, the Comptroller and the Brooklyn District Attorney.  He didn’t omit the elected officials, including the city council and representatives of the Mayor’s office, “who have graced us with their presence and their comm

itment to engaging in public service beyond the last Sunday preceding the first Tuesday in November.”

His humor was delightful.  His grace, honorable. His message, mighty.

Dr. Brooks’ presentation also was impressive for its example of how a trained mind works from an exacting memory: no notes.  He never missed a beat even as he was asked to announce cars that were double parked and about to be ticketed. As The Rev. David B. Cousin, Bridge Street’s pastor, handed the guest speaker a slip of paper during his address, Dr. Brooks said, “Now speaking parenthetically about the affluence and prosperity of this great congregation, the pastor just passed me a note, there is a silver, note that, Mercedes – notice I said I was speaking prophetically.”  Dr. Brooks then read aloud the license plate number, and immediately continued with his keynote with: “We will intervene with the Lord as you try to move your car to avoid a ticket.” The congregation erupted in laughter.  (Bernice Elizabeth Green)

“Not Merely Historic, But History-Making” (Excerpts)

On this memory-imbued afternoon, we find ourselves in this sacred space at this sacred time, not by happenstance, not by accident, not as a consequence of a crap shoot of chronology.

We African Methodists.  We Baptists.  We Catholics.  We Gentiles and Jews.  We, from every area of the county, whatever your hue or heritage, race or religion, if you are here, you are in a special place.

There’s some senior who says I’ve been through a few things; I’ve walked a long way.  There’s some mother or father, some husband or wife who’s yet grappling with grief and wondering what does God have to say to me?  There’s some parent or grandparent or prodigal son or prodigal daughter who’s asking even amidst this august celebration of history, “What does God have to say?” and I want to simply say to you as preachers have said over the many generations this church has been in existence:  God yet speaks.

… The scholar Isabel Wilkerson, in the eloquently incisive book called “The Warmth of Other Sons,” described a journey of six million African Americans from foreign countries, oppressive countries, countries in which they were mistreated and enslaved like the Israelites in Egypt; nations known as Jim Crow South Carolina; Jim Crow Georgia; Jim Crow Alabama.

And not only that, there were those who came from Islands: Jamaica, the Bahamas, and they came to a place they understood to be a Canaan land:  New York City, Brooklyn.  They arrived, not always by Delta Airlines, not always by First Class, some of them came by Delta Airlines of the working class, translating and transliterated, that would be Greyhound Bus lines.  They came by rail and by car to New York City.  They came to Brooklyn.  They came here with the memory of slavery.  They came here with the memory of oppression.  They came here understanding what it was like to do without, to not have, to go wanting, to be hungry, to be homeless, to be without clothing, and to be without sufficient provision.  They came to this church seeking help, seeking hope, seeking power, seeking prayers, seeking salvation, seeking God’s love.  This is described and was described as the Great Migration.  But history tells us that this church was here before they got here.  You, like the ancient Israelites, have an ancient history relative to American history.

(In) Deuteronomy, which is simply the recounting, the retelling, the reiteration, if you will, of the Law, we have Moses delivering up a series of sermons.  In this 26th Chapter, versus 1-9, the people are told to declare where they are…

Thereafter, they are told to declare where they came from.  And if by chance someone wants to glean some kind of message they’d like to remember ‘round about Tuesday or Wednesday of this week, you can just say the preacher stopped by and he taught under the topic, “Not Merely Historic, but History Making.”

And they came to this place.

(Excerpts from the final parts of Dr. Brooks sermon will be presented next week.

The full text can be found at www.ourtimepress.com)