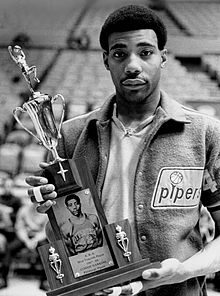 The Phoenix Suns released the following statement: “‘The Hawk’ revolutionized the game and remains to this day an icon of the sport and one of basketball’s great innovators,” the team issued the following statement. “His unique combination of size, grace and athleticism was well ahead of its time and his signature style of play is now a hallmark of the modern game. A flip of the coin changed the Sun’s fortunes and he helped put Phoenix on the map as the city’s first professional sports superstar. Rightfully, he became the first Suns player inducted into the Basketball Hall of Fame and his No. 42 hangs in the rafters at Talking Stick Resort Arena as part of our Ring of Honor. Connie’s passion for the game was only matched by his desire to give back to the Phoenix community, a role which he played proudly as a Suns community ambassador, spreading warmth and kindness to everyone he encountered. We will miss Hawk dearly. Our thoughts and prayers go out to his family and friends as we mourn the passing of a true Suns legend.”

From his NBA bio: Connie Hawkins’ career holds as much mystique as that of any other NBA Hall of Famer. A man of remarkable talent who played much of his career in the shadows, he didn’t put up legendary numbers during his seven years in the NBA: only 16.5 points and 8.0 rebounds per game. Nevertheless, Hawkins was voted into the Hall of Fame in 1992, an acknowledgment that he had been unjustly denied the opportunity to show his talent in his most productive years, and that most basketball fans had likewise been denied the opportunity to see the best that this innovative player had to offer.

Most of what Connie Hawkins did was never caught on film. He was a New York 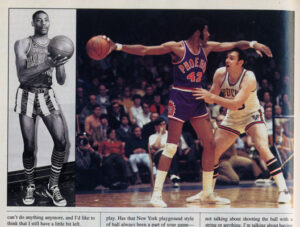 playground legend who was exiled for years to exhibitions with obscure teams in half-filled arenas. Accounts of his finest moments circulated by word of mouth, and he never lost his hold on the imaginations of those fans who did catch him in his prime.

Praised by his contemporaries as perhaps the most talented forward ever to play the game (this was before Julius Erving and Larry Bird), the 6-8 Hawkins was known as one of the first players capable of swooping, soaring flights to the hoop, followed by acrobatic, throw-down dunks.

Cornelius Hawkins was born on July 17, 1942, in the Bedford-Stuyvesant section of Brooklyn. By the age of 11 he was dunking. Word flew through the neighborhood. Pretty soon there were stories that had him jumping off the planet. They claimed he broke the laws of gravity. “Someone said if I didn’t break them, I was slow to obey them,” he told the Philadelphia Inquirer.

In 1960 he was a Parade magazine High School All-American. But in 1961, when he was a freshman at Iowa, a gambling and point-shaving scandal broke out in New York. Hawkins was not arrested, indicted or even directly implicated. But it was suggested that he had introduced other players to a man convicted of fixing games. The principals in the scandal claimed that Hawkins had no knowledge of any fixed games. Nevertheless, he was linked to the scandal and therefore tainted. Before he even suited up for one game, Iowa said, “So long.” The NBA, a young league struggling for growth and mindful of its image, said, “No, never.”

So Hawkins became a nomad. He toured the world with the Harlem Globetrotters and played with fledgling leagues while hoping that he would eventually be allowed to fly with the big birds.

At age 19 he played a season for the Pittsburgh Rens of the American Basketball League and was named the league’s Most Valuable Player. The best thing about the ABL, said Hawkins, was that it had a team in Hawaii. The ABL folded during its second season, and Hawkins circled the world with the Globetrotters for two years. It wasn’t competition, but Hawkins needed the paycheck. “There was a chance that I couldn’t have gotten a job at all,” he recalled in 1992.

Hawkins played 70 games for the Pittsburgh Pipers in the inaugural 1967-68 season of the American Basketball Association. The ABA was a little flaky, but its teams did have a lot of great talent on their rosters. And unlike the Globetrotters, and to a large extent, the ABL, it was a bona fide professional league.

The ABA had expected its star attraction to be a Rick Barry, who had been lured over from the NBA’s San Francisco Warriors, but Barry was forced to sit out the season as the result of a legal ruling. So Hawkins became the foremost star in the new league. Roger Brown and Doug Moe, two other players who had been tainted by the college betting scandals but, like Hawkins, were never convicted of any wrongdoing, also hooked up with the new league and were among its best performers.

Hawkins led Pittsburgh to a 54-24 regular-season record and into the playoffs. The Pipers waxed the Indiana Pacers in three straight games in the opening round, then trounced the Minnesota Muskies, four games to one, to enter the first ABA Finals. Their opponent was the New Orleans Buccaneers. The New Orleans squad took a 3-2 series lead, but the Pipers regrouped to take the final two contests and claim the ABA Championship.

Hawkins led the league in scoring with 26.8 points per game and pulled down 13.5 rebounds per contest, second in the circuit to Mel Daniels of Minnesota. He shot .519 from the field, second in the ABA to teammate Tom “Trooper” Washington. Hawkins’s numbers earned him the ABA Most Valuable Player Award for 1967-68. He was joined on the All-ABA Team by Doug Moe, Mel Daniels, Larry Jones, and Charlie Williams.

The next year the team moved to Minnesota, and Hawkins played about half of the season. In 47 games he averaged 30.2 points (second in the ABA to the Oakland Oaks’ Barry) and 11.4 rebounds (fifth in the league), while shooting .503 from the field. He repeated as an All-ABA selection, joining Barry, Daniels, James Jones and Larry Jones.

The Pipers moved back to Pittsburgh for the 1969-70 season (and changed their name to the Condors the season after that), but the Hawk was about to fly to greener pastures. In two ABA seasons Hawkins had averaged 28.2 ppg and 12.6 rpg. His playoff scoring average was also 28.2 points per game.

Hawkins was an awesome offensive force in one-on-one situations — a shot creator who was quick, agile and a great leaper. A decent outside shooter, he was most in his element when exploding past defenders, wheeling toward the basket with giant strides, and packing the ball through the hoop. “He was the first guy on that Dr. J, Michael Jordan level,” said Doug Moe in Sports Illustrated. “Long strides. Hold it in one hand. Wheel it around. Nobody could match him for that.”

In 1969 a couple of significant events occurred. A Life magazine article strongly suggested that Hawkins was innocent of any wrongdoing in the gambling scandal of nearly a decade earlier. The article painted Hawkins as a terrified teenager who had been trying to mollify his questioners by agreeing with them. While the article was causing a stir, Hawkins’s lawsuit against the NBA was working its way toward a resolution. Later that year NBA Commissioner J. Walter Kennedy lifted the ban against Hawkins after settling his antitrust suit for more than $1 million. That allowed Hawkins to join the Phoenix Suns at age 27.

Hawkins was generous in his feelings toward the league. “I was so happy to play, I didn’t have any problems with animosity or bitterness at all,” he told reporter Ron Rapoport. “As soon as I got that Phoenix Suns uniform, I just wanted to play.”

Having found redemption, Hawkins now set out to prove that he was as good as his legend. In 1969-70 Hawkins played 81 games with Phoenix and poured in 24.6 ppg, sixth in the NBA. His scoring average was tops on the Suns, who had two other 20-point scorers in Dick Van Arsdale and Gail Goodrich. Hawkins also hauled in 10.4 rebounds per contest and doled out 391 assists, nearly 5 per game. He was named to the All-NBA First Team along with Willis Reed, Walt Frazier, Jerry West and Billy Cunningham.

Although Hawkins’s numbers slipped slightly over the next two seasons, he was still a star. He averaged 20.9 and 21.0 ppg in 1970-71 and 1971-72, respectively, but his rebounds per game fell to single digits.

Those would be considered fantastic seasons for most players, but Hawkins came into the league with a reputation. Some writers and fans began to make critical comments. There were questions about his desire to win. The athleticism was there, but the passion seemed to be lacking. Maybe, it was said, the intensity had been left on the playground, on the ABL and ABA courts or in clowning with the Globetrotters.

Opponents would have none of it. “If Connie Hawkins has slowed down,” Detroit Pistons Coach Ray Scott was quoted as saying in the Seattle Times, “I wish he’d show it against us.”

By 1972-73 Charlie Scott was the scoring workhorse for Phoenix, averaging 25.3 ppg. Hawkins’s skills were beginning to fade a bit, but he was still able to score 16.1 ppg on guile and savvy. After eight games in 1973-74 he was traded to Los Angeles. The Lakers were aging; Wilt Chamberlain had retired, and injuries limited Jerry West to just 31 games. Hawkins, too, had entered the stage of his career where, although he was still playing solid minutes, his numbers were declining — for example, his scoring dropped to 12.6 ppg.

His election to the Hall of Fame was due in large part to his showmanship. Hawkins was the first player to demonstrate the style, flash and cool that were trademarks of later players such as Erving and Michael Jordan. His enshrinement also acknowledged that not all of the greatest basketball was played on the NBA courts. Some of the most poetic ball was played in dimly lit recreation center gyms and on blacktop courts with chain nets. That’s where Connie Hawkins really built his reputation. By the time he finally made it to the NBA, he had just enough juice left to prove that, yes, the things they said about him were true.

For Hawkins, the honor was a dramatic vindication. He had always maintained his innocence in the betting scandal and had conducted himself without rancor once he was allowed into the NBA. The phone call in 1991 that brought the news that he would be inducted into the Hall of Fame came at 8:30 one morning. “After I realized what the call was about, I cried,” he told writer Don Williams at his induction. “I think maybe I’ve grown an inch or