Boys and Girls High to Celebrate the Return of Academic Excellence 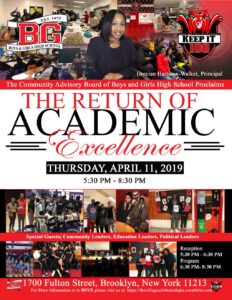 Several years ago, the historic Boys and Girls High School was designated a “failing School,” and plans were announced for its possible closing. Bedford Stuyvesant leadership, led by the Community Advisory Board of BGHS, thwarted those efforts. On Thursday April 11th from 5:30 to 8:30pm the board and other Bedford Stuyvesant leaders will celebrate the Return of Academic Excellence to BGHS, recognizing the outstanding achievements of Principal Grecian Harrison-Walker and her team.

The public is invited to join this joyful and historic event attended by community, educational and political leaders and other guests, including, of course the hardworking students. It will be held at the school, 1700 Fulton Street between Stuyvesant and Utica Avenues. The reception is from 5:30 to 6:30 and the program from 6:30 to 8:30.

“I thank the entire Bed-Stuy and Central Brooklyn community, and of course the Community Advisory Board of Boys and Girls High,” said Vann. “We’re pleased and honored by the great work that Principal Grecian Harrison-Walker has done with her team, because Boys and Girls High has now returned to the academic excellence that it was once known for.  We were fortunate enough to have leaders to come in and work hard to bring Boys and Girls to the level that they are now, and we will continue with this academic excellence.”

“This is a power move!” said Bernice Elizabeth Green, founder of KinEsthetics International and Our Time Press Advisor. “My mother always said, ‘You lose the schools, you lose the community.’ “