BLACKFACE PAINTS AN UGLY IMAGE IN AMERICAN HISTORY … AND NOW

Some years ago, a friend and I were visiting a nostalgia convention when we came upon a vendor who was actually selling vintage items. He was one of the few; there were mostly tables with DVDs and other contemporary stuff, along with long-past movie stars charging folks to take photos with them and sign autographs.

A case in the vendor’s stall held at least one thing that intrigued both of us:

I was very familiar with blackface but had never seen the actual stuff in a tube. I didn’t buy it, but I did write about it and the country’s racist history with blackface. The photo in Virginia Gov. Ralph Northam’s medical school yearbook from the 1980s reminds us that the past is never far behind us.

Here’s what I wrote about that tube of makeup and the history of blackface back in 2012: 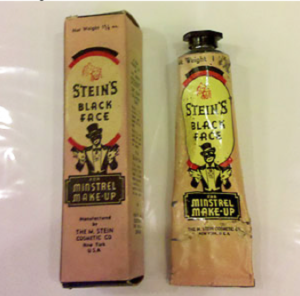 My friend Rebecca alerted me to the bright yellow tube in the vendor’s case. On the front was a man in blackface with huge white lips wearing a tux and white gloves, and the product was a tube of blackface makeup.

I was very familiar with blackface and its use in minstrel and vaudeville shows from a century and more ago as a vehicle to stereotype and negate the humanity of African Americans. But I had never seen a tube of the stuff that transformed white and brown skin into something that looked more like tar – not like the true blends of African American skin color.

Rebecca and I were at a nostalgia convention, scoping out the tables in a hall that was long on DVDs and old movie stars signing autographs but pretty short on much else. So, when we came across this dealer who actually had vintage items – even if most were before our adult years – we were excited. Against one wall, he had propped up from road tours featuring Nat King Cole, Ella Fitzgerald and others.

A tube of Stein’s blackface makeup for minstrel performers. 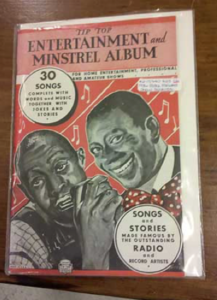 But my interest right then was on the face paint. So, I obviously asked the dealer if I could take a closer look at the tube, which came with its original box. It had been made by the M. Stein Cosmetic Co. of New York, which apparently manufactured theatrical makeup and greasepaints.

Stein’s must have been one of the major makers because I found mention of white actor Eddie Cantor’s tube of Stein’s blackface makeup in an exhibit of Broadway history at the Museum of the City of New York, held a couple years ago.

According to the box, the makeup was to be applied pretty simply: “Moisten the finger tips with water and spread black face evenly over the face. Easily removed with soap and water.”

The box offered instructions on how to apply the blackface makeup.

The change it made in its wearer was more complicated and less human, although I’m sure he/she may not have thought of it as such.

Blackface had not always been painted with cream. White men used burnt cork or black greasepaint on their faces in minstrel shows that got started in this country before the Civil War. Portraying black people as stupid and lazy with large lips – usually red – seemed to be a popular form of entertainment. The use of blackface on stage, however, had dated back farther to Shakespeare’s Othello. The British citizens who fled their country for this one seemed to have brought it with them, with some alterations.

After the Civil War, African American men and women took to darkening their skin with black paint, ironically mimicking themselves being who they were not.

“The one fatal result of this to the colored performers was that they imitated the white performers in their make-up as ‘darkies,’” actor George Walker, who performed with vaudevillian Bert Williams, was quoted as saying. “Nothing seemed more absurd than to see a colored man making himself ridiculous in order to portray himself.”

In the early 1900s, Walker and Williams, both African Americans, performed in blackface as “Two Real Coons,” and became quite successful, so much so that they took the act to Broadway and it became a musical comedy. Walker died in 1909, and Williams went on to become a celebrated comedian and Broadway star. An attractive man, his blackface sketches make you cringe.

(Williams had to compete in blackface with Cantor and other white actors who made more money than him by pretending to be black. After he died in 1922, a letter Williams sent a friend was published in the Chicago Defender:

“I was thinking about all the honors that were showered my way at the theater. How everyone wishes to shake my hand and get an autograph. A real hero you’d naturally think. However, when I reached my hotel (in downtown Chicago) I am refused permission to ride on a passenger elevator, cannot enter the dining room for my meals and am Jim-Crowed (segregated) generally. But Bill, I’m not complaining particularly since I know this is an unbelievable custom. I am just wondering. I’d like to know when ultimate changes come and those persons I meet at the theater eliminate through education and common decency the kind that run such establishments what will happen. I wonder if the new human beings will believe such persons I am writing you about actually lived?”)

In addition to Cantor (who appeared in blackface with Williams on Broadway in the “Ziegfeld Follies” in the 1920s), white film stars who used blackface included Bing Crosby (“Holiday Inn,” 1942), Al Jolson (he could be called the “father” of blackface), Fred Astaire (“Swing Time,” 1936) Shirley Temple (“The Littlest Rebel,” 1935), and Judy Garland and Mickey Rooney (“Babes in Arms,” 1939).

And into the 20th and 21st centuries, some folks still tried to slip it in: Remember Ted Danson’s debacle in 1993 with then-girlfriend Whoopi Goldberg and will.i.am’s performance at MTV’s 2010 VMA awards.

At an estate sale at a home a year or so ago, I came across an old Kodak-size photo of two white men in blackface. Maybe they dressed up in the stuff to entertain their family.

At the nostalgia convention, the vendor also had a book of minstrel tunes for player piano rolls with a man in blackface on the front. I’m sure the music in the “Home Minstrel Series” was less than appealing.

Later, at an antiques mall – it seemed to be a day for minstrelsy – I came across a minstrel song book with Stephin Fetchit and another performer I did not recognize on the cover. Published in 1936, it was titled “Tip Top Entertainment and Minstrel Album.” It was in a plastic sleeve, and I didn’t remove it. Fetchit was an actor whose character was dimwitted and lazy, and an affront to black people.

The booklet reminded me of another minstrel songbook I had actually purchased at auction a few months ago.

Sherry L. Howard, a retired journalist, has written about African American art and history, as well as the everyday things that end up on the auction tables. You can read her blog at myauctionfinds.com.

(The Collector is part of a series of Our Time At Home articles, edited by Bernice Green}