Bill Thompson on a Second Run for Mayor 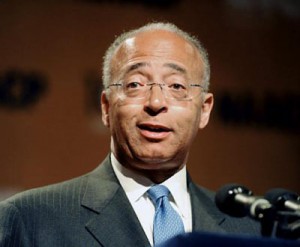 On any given day New Yorkers may see Bill Thompson dashing across the city from appointment to fund-raiser on the subway, getting his hustle on. Though some are reticent, diverse others ask, “Bill? Bill Thompson?” He doesn’t mind being approached. Invariably, folk speak of voting for Thompson four years ago, or ask to join his current campaign. The city’s former comptroller takes it all in stride.

Thompson still believes in job expansion via big and small business. Education continues to be his passion. He sees affordable housing as a possibility for all – the poor, as well as working and middle classes.

And of course, Thompson still believes overriding term limits was a violation of the public trust. “Everybody needs to be asked the question on the issue of term limits: ‘What did you do?’ That is part of everyone’s record – what they did during that period of time. It isn’t going to be just the mayor, it’s going to be for other offices also. They’re going to have to answer the question,” said Thompson. “I know what I did. I know that I opposed the change. I thought that if there was going to be any change it should go back to the people of the city. I worked hard against the change, and I chose not to run for a third term as comptroller because I thought that would’ve been wrong also.” Alluding to Speaker Quinn’s role in the debacle, Thompson said, “I think everyone who is running for mayor — on all lines — is going to have to answer that question, and clearly the Speaker of the City Council is going to have to answer that question also. In a lot of ways she helped enable a Bloomberg third time. She’s going to have to answer to the public about that, too.”

Thompson has continued to serve the public since 2009 when he came within 4 points of beating Bloomberg despite being outspent by $100 million and the mayor’s manufactured campaign theme that a landslide was inevitable.

Currently, Thompson is Chair of the Governor’s M/WBE Team. Building upon Governor Paterson’s goal of 10% minority and women participation in state contracts, Governor Cuomo has doubled that goal, as announced in his first State of the State Address. “I give Governor Cuomo a lot of credit. It took a lot of courage to set a number that high and that strong,” said Thompson. “It’s a question of holding his commissioners accountable to making sure the number is achieved. Nobody wants to fail the governor’s goal. They are all focused. It isn’t going to happen overnight, but the numbers are moving up.”

Challenging the common perception that M/WBE certification is an end goal, as opposed to actual business, Thompson said certification helps agencies become aware of minority-and women-owned firms. Thompson gave an example of an M/WBE forum that was held specifically to bring larger builders in contact with minority-and women-owned firms to construct a new $300 million building at City College, with a goal of $100 million of that building done with minority firms. At that forum, Thompson indicated that some firms would walk out with business. And they did.
“That is, for the state of New York, something I am very proud to be involved in,” said Thompson, pointing to his background working on newer developments as Deputy Borough President in Brooklyn, to being at the Board of Education and pushing things there, to being Comptroller of the City of New York when under his tenure minority and women owned pension management increased from 1% to 7% ($7 billion, up from $1 billion). “That was something I was very proud of,” Thompson added. “It is something I believe in, something I worked most of my life in pursuit of – fairness and opportunity.”

Thompson says NYC has a prime opportunity to create more affordable housing – low- moderate- and middle-income housing. His proposal is to take down old, antiquated schools that are 50-100 years old, rebuild them and go above the 2-3 floors for school use and build affordable housing up.

“That land belongs to the City of New York. A lot of low-income housing is by virtue of the subsidies you put in. You can have new buildings, or at least new schools that are up-to-date and technologically advanced that really serve our children, and also have the opportunity to build new buildings above those schools and be able to maintain affordability. Not affordability for a year or 10 years like you saw in the Mitchell Lama program (25 or 30 years), but constant affordability. You can drive cost because of the land doesn’t cost, which really factors into price, but also keeping property taxes down for those buildings in return for affordable housing,” said Thompson.
On jobs, Thompson said at times the city is “outsourcing for outsourcing’s sake. I would like to bring more [jobs] into the city and in-house. If you are going to bring them in house, you have to make sure that our city workforce has the skills to do those jobs, with workforce training and development.” Regarding sick leave, he said “We’ve got to find a way to make paid sick leave work for small businesses because the fear is we don’t want to squeeze and put small businesses out of business, but at the same point, we can’t ignore the need for paid sick leave.”

Thompson said of his candidacy, “I think people want leadership that speaks to them, that is going to work for them, and that understands the pressures they are going through and the difficulties of living in New York for poor, working-class and middle-class New Yorkers. That’s the vast, vast majority of the people of this city. I think the Democratic Party definitely carries more of those ideals.”

“I can’t speak to everybody else’s candidacy, I can speak about mine. My vision of New York City is an inclusive vision for working-class and middle-class and poor New Yorkers,” said Thompson. “We haven’t had somebody that speaks to all of New York for 20 years almost. It’s time. It’s time for someone who is going to work for all of us who will speak to all five boroughs, who understands the struggles and the difficulties, as well as the successes we go through and achieve in this city each day.”