Ben Carson is totally unqualified to be HUD secretary

Issac Bailey has been a journalist in South Carolina for two decades and was most recently the primary columnist for The Sun News in Myrtle Beach. He was a 2014 Harvard University Nieman fellow. Follow him on Twitter: @ijbailey. The views expressed are his own. (CNN)

It’s fitting that President-elect Donald Trump has chosen Dr. Ben Carson as his nominee for the Department of Housing and Urban Development. One man uniquely unqualified for the job he is about to undertake wants another one in a similar position, each with the ability to cause great harm to the most vulnerable Americans because of his over-inflated sense of self.

Carson is a brilliant, pioneering neurosurgeon who backed Trump after he gave up on his own bid to become president and rose to national political prominence by challenging President Barack Obama during the National Prayer Breakfast, instantly earning credibility from the far right. But he has no government experience and never managed anything close to the size of HUD, an agency that has a $47 billion budget and helps 5 million low-income families.

What’s more is that he seems convinced that government is the problem and largely incapable of helping the already-vulnerable without hurting them even more.

“These government-engineered attempts to legislate racial equality create consequences that often make matters worse,” he wrote in an op-ed in June 2015. “There are reasonable ways to use housing policy to enhance the opportunities available to lower-income citizens, but based on the history of failed socialist experiments in this country, entrusting the government to get it right can prove downright dangerous.”

He seemed not to fully understand the programs he was criticizing. He talked down the use of busing to integrate schools without realizing that the controversial program was found to be one of the most effective tools in closing the achievement gap between black students and white students. He ignores the incredible progress government programs have made in curbing poverty. More than half of black Americans lived in poverty in the years before the war on poverty began; that number has been cut by half. And in 2015, the Census Bureau recorded the largest annual drop in the poverty rate since 1968.

Yes, the government has done awful things in too many cases detrimental to the principles upon which the United States was founded, including slavery, the Tuskegee experiment and even housing programs that fueled segregation and pockets of blight in large cities.

But it makes little sense to hire a man who doesn’t really believe government can be a force for good to head an important government agency. His prominence in conservative circles rose during that National Prayer Breakfast when he challenged Obama and heavily criticized the Affordable Care Act, which has helped 20 million Americans attain health insurance, among many other benefits. 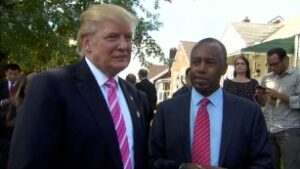 Carson is convinced that pulling yourself up by your bootstraps is the key to success, not what he deems government handouts, even though he and his mother once benefited from government help. They relied upon food stamps and other benefits such as free glasses from school, things he considers handouts when they are given to others, a necessary evil when his family had to rely upon them.

I, too, grew up in poverty and on food stamps and know that personal perseverance and excellence only take you so far. Outside intervention — like good housing policy — is also necessary.

Carson’s spokesman, Armstrong Williams, had suggested he had lived in public housing, giving him insight into HUD’s mission. But he later said Carson hadn’t lived in such units. It doesn’t matter if he had or not. Living in a public apartment complex does not make you qualified to be in the president’s Cabinet.

What makes this pick perhaps more frightening than having Steve Bannon as a top adviser in the White House is that it affects the most vulnerable among us, those who usually don’t have a lot of political capital and often can be easily scapegoated and vilified by those hostile to programs for the poor.

It will be even easier for Carson to cut and mismanage the programs of his department and blame those who he’s been tasked with helping because he was born into poverty and overcame a bevy of obstacles. His is an inspiring story. Yet too often in recent years, he has applied it improperly to broad social challenges, using it as a cudgel against the needy, akin to NBA Hall of Famer Magic Johnson failing at coaching because he couldn’t understand that not everyone he tried to teach had been gifted with his unique set of God-given talents.

The issues Carson will be tasked with solving or managing are exceedingly complex and pose challenges even for those fully qualified and committed. Imagine if Trump had tried to make him Treasury secretary, placing him in charge of programs directly affecting the richest rather than the most vulnerable among us. There would be major pushback, and the nomination would be scuttled. If we really believe the poor are as deserving as the rich to be represented well in Washington, the same thing should happen with this potential appointment.