A who’s who of Bedford-Stuyvesant’s elected politicians made a surprise visit to a low-income housing complex to decry conditions, but tenants and long-time workers were divided on the conditions with many saying they have improved – not worsened.

The only sure thing is the six-story, four building, 287-unit Fulton Park Apartments complex on Chauncey Street just behind the A-train stop at Utica Avenue and Fulton Street is prime real estate.
According to January 2011 city records, the property’s market value skyrocketed over 50 percent in the last year from $12.1 million to $18.9 million. 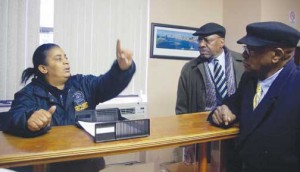 “We’re here to turn around what’s happening in this development, and make certain that things are done right because the federal government provides subsidies to the owners and if they’re not done right, we’ll move to Plan B,” said Congressman Ed Towns at the start of the tour.
Willie Hill, superintendent of the Fulton Park Apartments for the past 25 years, says the buildings are better now than years past: “There used to be 40 or 50 vacancies under the old management; now there are four or five.”

Councilmember Al Vann, State Senator Velmanette Montgomery and Assemblywoman Annette Robinson joined Towns as did community Board 3 members and people affiliated with The Brownstoners of Bedford-Stuyvesant, who were instrumental in organizing the surprise walkthrough.
The officials came to inspect first-hand complaints that the complex was rife with unsupervised young people and gangs, was bestrewn with garbage and suffered broken elevators and other decrepit conditions.

What they found was a well-kept complex, with freshly-painted narrow submarine-type corridors connecting all the buildings, elevators working, washed floors and minor litter including cigarette butts, candy wrappers and one condom wrapper in the courtyards.
“It’s gotten a lot better over the years,” said Mary V. Floyd, an elderly woman tenant who has lived at the complex since 1977. “Sometimes the kids hangout in the hallways, but I tell them you can walk or I’ll call the po-po.”

Detective William Jenkins community affairs officer for the 81st Precinct conducted the tour and he immediately pointed out that the gate in a nook directly behind the Fulton Plaza on the corner of Fulton Street and Malcolm X Boulevard was often open and in disrepair.
Kids getting out of Boys & Girls High School across the street gain entrance into the houses and hang out, he said.

But four-year resident Chanelle Walker, 24, said the gate is not usually a problem. “Security locks it right before the kids get out of school,” she said.
Jenkins also alleged that the 24/7 security firm was in cahoots with criminal elements in the complex and often won’t call police if there’s a robbery.  Upon questioning, however, Jenkins admitted the complex’s owners allow police to also patrol the corridors, but the precinct lacks sufficient manpower to do it very often.
Mel Marciano, 22, and a lifelong resident of the complex said that sometimes people make the complex dangerous, but there are now cameras everywhere including the halls, the elevators and on the roof, which makes the building a lot less dangerous.
“There’s no drug trafficking but there’s a lot of police trafficking,” he said. “We get a lot of police harassment here.”

Marciano said there was a small gang presence in the complex, but for the most part, gangs were in the immediate vicinity and not in the buildings.
Marciano said that since the new management, E & M, took over, the upkeep has been much better. “Before they came there were no cameras and every hallway used to have huge rats,” he said.
This sentiment of good upkeep since the new management company took over in 2005 was echoed by several residents. When something breaks in an apartment the fix is usually made sometimes that very day or the next day, they said.
But Tenant Association President Geraldine Kinley and others insisted garbage is left continually in the halls and rodents roam throughout the complex.

Willie Hill, the complex super for the past 25 years, took umbrage at this accusation, saying that he and his eight-man crew work hard every day with the upkeep of the buildings.     Some tenants draw mice because they don’t keep their apartment clean and they throw garbage in the halls, but it is always removed and cleaned as soon as possible, he said.
“Anybody that tells you these buildings are getting worse are lying,” he added. “There used to be 40 or 50 vacancies under the old management, but now there’s four or five”.

E&M management and its parent company Rainbow Estates Group under principle Irving Langer, took over the property in 2005. They are major real estate players in the city’s low-income property market – having spent $122 million last year in purchasing 25 properties citywide.
Harlem’s non-profit Abyssinian Development Corporation also hailed Langer last year as a developer with a real concern for affordable housing after he sold his 2630 Frederick Douglass Boulevard property to the group to preserve 76 units of affordable rental housing with additional rental and homeownership units to be built on the site.
E&M Spokesman Joel Goldstein said in the case of the Fulton Park Houses the company has a contract with the State Department of Homes and Community Renewal (DHCR) which administrates the federally-funded Section 8 program wherein tenants pay thirty percent of their income towards rent.
Rents at the complex are competitive, but not cheap. One bedroom apartments go for $1,199 per month; two bedrooms go for 1,446, three bedrooms for $1,736 and four bedrooms for $2,028.

Goldstein surmised the complex’s market value went up 50 percent because the company put over $5 million in capital improvements in the property and then got a seven percent rent increase from DHCR across the board. These improvements included a new roof, four new elevators, and new radiators and windows in all the apartments, he said.
“Look at the history of the Fulton property. When we took over there were 80 elevator violations a year and now we’re down to eight,” he said.
Goldstein said the DHCR contract runs out at the end of 2014 and the company is obligated to a five-year extension after that.
When OTP questioned Goldstein about selling the property for, say, senior housing, which in effect would push 287 low-income families out of Bedford-Stuyvesant and further gentrify Stuyvesant Heights, which is a few blocks away, he scoffed.
. “We cannot sell the property at least until the lease runs out,” Goldstein said. “We had opportunities to opt out of HUD (Department of Housing and Urban Development) programs before and we didn’t.”