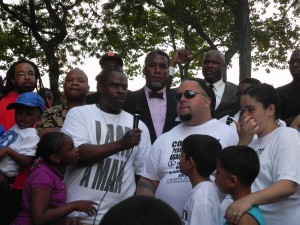 Summertime, and the living in many urban areas is hard, not easy. Violence is known to reach an all-time high once heat hits, and so does fear.

So as temperatures rose last week, tempers did too, especially at the Peace and Prayer Rally where Eleanor Roosevelt Housing residents, community activists and supporters expressed complete disdain for the violence gripping north Bedford-Stuyvesant as well as for those “innocents” who do not see fear of snitching as secured protection for violators and criminals.

“You can’t walk around (being) afraid in your own home, I’m lying in my bed two nights ago listening to gunshots,” said an angry resident during the rally facilitated by Brooklyn Anti-Violence Coalition peacekeepers. “We have to come together (and now), we have to put a stop to it, even down to our black men–because it’s either two things: live or die.”

And it came down to that for one breathtaking moment when a pregnant woman risked her life and that of her unborn baby racing to rescue her three-year-old from a spray of bullets directed at a popular children’s area by “punks.”

District Attorney Charles Hynes, who attended the rally, offered bittersweet statistics: for the first time since 1963, last yearBrooklynwas under 200 murders. Last week, the official count was moving up by degrees: so far, there have been 14 more murders than last year at this time.

The mother and child are alive but the community refuses to let them stand as the unfortunate symbol for the spate of gun attacks in Bed-Stuy as of late.  Two men have been arrested over the gun duel in the Pulaski Street play area; another is still at large.

“We have to get the community to work very aggressively with the police department,” Hynes said. “There’s no question that the tremendous drop in crime in the 23 years I have been DA has been enlarged by community involvement (and) people like Reverend Taharka Robinson {BSVAC President and Founder} and all of the other activists — those people are the key.  We should energize (around them) and form a bond against those who want to accuse ‘snitches’ of being bad people.”

According to Hynes, during the shooting, about two dozen residents witnessed the attack and since then no one has come forward with any information. The meaning of “snitch” is one that has historic roots when the law did not necessarily protect the good guy.  A “snitch” was shunned from the community not simply for telling the truth, but for revealing the secrets – linked to survival — hidden in the community.

But today, says Hynes, no child “should have to worry about being shot.”

“They should worry about what they want to be when they grow up, they should worry about their homework,” said Councilwoman Letitia James, an unannounced contender for the Public Advocate office come this fall.   “I don’t want any child in this neighborhood or anywhere in this city to get accustomed to violence.”

“Snitching is a duty, it’s a responsibility, it’s an honor if you care about this community, if you love this community; it took a three-year-old to shine a spotlight on Eleanor Roosevelt.  So, in the words of the late Councilman James Davis, ‘Love yourself, Stop the violence’.”

Brooklyn DA Hynes is asking anyone with information about the third suspect to come forward and anonymously call theCommandCenterhotline at (718)-250-2024, or tell an official they trust.