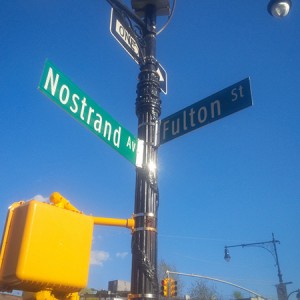 Fulton Street and Nostrand Avenue are two of Brooklyn’s lucrative commercial corridors.  Even a shuttered storefront is a gold mine.  March 2009, Bedford Stuyvesant Restoration Corp. (BSRC) received the green light from the NYC Department of Small Business Services to operate the Bed Stuy Gateway BID (Bed Stuy BID) which currently covers 28 blocks on Fulton Street (between Classon and Lewis Avenues) and Nostrand Avenue (between Halsey Street and Atlantic Avenue).  The inventory of commercial properties can be viewed on the website, www.bedstuybid.org, in the “Vacancy Report” and “BID Photo Gallery” web pages.

Bed Stuy BID evolved into a stand alone entity in 2013.  The Executive Director Michael Lambert explains “the past three years has been about the re-stating of the BID.  The financial management software is migrating from BSRC over to Bed Stuy BID.”

New York City’s BIDs have goals and this one is no exception.  Mr. Lambert counts upgrading the website as one of many goals.  The upgrade “will improve overall website function including the Business Directory and Vacancy Report.”  Another goal is establishing a real estate committee which is comprised of BID property owners for the purpose of getting their input in the shaping and growth of the corridor.  The fruit of this collaboration shall be “attracting quality businesses to the BID and a diversity of business offerings.”

Other goals fall into the category of marketing and engagement.  Marcy Plaza with its Mathematical Mosaic Star and outdoor seating is the perfect spot for public discourse and events.  Merchants will be re-engaged through the Nothing But Networking series starting March 23, 2016.  Bed Stuy BID “will rotate the network venues throughout the the BID to promote to external businesses, to the community, and to build relationships amongst existing BID businesses.”

Significant marketing impact will occur from spring-themed commercials strategically scheduled around Easter and two weeks in May on NY1, Brooklyn 12, MTV2, OWN, Animal Planet, and Centric.  The BID wants to get to a point “of running commercials year-round.”

Hopefully, the power of word-of-mouth marketing is in the mix.  A happy BID merchant is another key marketing component.  This Our Time Press published the article Don’t Sit on the Fence About Your Property, January 21 ,2016 wherein seven business owners in storefronts in 1201 Fulton Street (the northeast corner of Bedford Avenue and Fulton Street) received Civil Court orders to vacate their premises by February 29, 2016.

One can only imagine the impact of seven voices praising Bed Stuy BID for its re-location assistance.  Mr. Lambert stated he “didn’t know they were to be evicted until talking with three of these merchants at the January 11, 2016 Small Business Town Hall Meeting.”  He “referred them to the Brooklyn District Attorney’s Office for investigation into possible deed fraud but didn’t give commercial property referrals.”

On March 8, 2016, Milton Jemmott, when queried about assistance from Bed Stuy BID, said, “No, the BID didn’t offer to re-locate us or tell us about other properties…I’m not sure if I told Michael that I am looking to buy.”

That same week, Sabine Bellevue, owner of Sabine’s Hallway Natural Hair Salon, sent an email message to explain that she independently found and relocated to 450 Nostrand Avenue on the second floor.