Last Saturday, Massachusetts Governor Deval Patrick and his lovely wife, First Lady Diane Patrick, an attorney, along with hundreds of friends, supporters and family members proved you can go home again —  especially when home is Brooklyn. 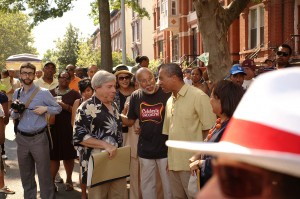 The Patricks joined celebrants in the co-naming of Jefferson Avenue, between Tompkins and Throop, as Bertram L. Baker Way – a tribute to Brooklyn’s first Black elected official who assumed office as a State Assemblyman in 1948. Lady Diane and her cousin journalist Ron Howell, an event host and planner, are grandchildren of the late pioneer.  Baker’s life and achievements inspired Governor Patrick who lived on Midwood Street in the Lefferts Manor section of Brooklyn in the 1980’s.

In the early afternoon, The Governor and First Lady spoke at the co-naming event, and later joined guests at Tremaine Wright’s Common Ground café for a reception and book signing for “A Reason to Believe,” Governor Patrick’s new memoir.

The book is about the Governor’s early life in relative poverty  and about the spirit that allowed him to later grasp at opportunities, to attend the elite Milton Academy and then Harvard College and Harvard Law School. Patrick later become head of the Civil Rights unit in the Justice Department under President Bill Clinton.

Jacqueline A. Berrien, Chair of the U.S. Equal Employment Opportunity Commission EOC), who splits her time between Washington, D.C. and her Brooklyn brownstone, told Our Time Press,  “I am proud to call Bedford Stuyvesant home. All of us here in Brooklyn have a debt to repay Mr. Baker who opened the doors. This event honors the work to which he dedicated his life: community service.”

Astute political analyst and author John Flateau, a longtime Bedford-Stuyvesant resident, offered a sweeping survey of the scene from 1949-1970, giving a nod to the power plays and the players, including Baker, Wesley McHolder, and Maude Richardson and Ida Jackson – “women who helped set the stage for Baker’s nomination in ‘48,” the Bedford Stuyvesant Political League, The United Action Democratic Association, his father Sidney Flateau and more.

“In the 1960s Baker became Majority Whip of the Assembly, the highest position of a black person in the state at that time,” added Flateau. “Earlier in the 1950s hepushed through first-of-its-kind laws barring housing discrimination in the 1950s.  The impact of that work is still felt– more than 50 years later.”

Ms. Berrien noted that some of today’s established politicians were campaign workers to major politicians in the past.  “They taught us.   Many of us volunteered to work on campaigns.  I’ve often said, I was privileged to practice Civil Rights law under giants.  At the core, Bertram Baker worked for the betterment of others, and worked to be of assistance and support to others. Service provides an opportunity to make a difference in the lives of others; the reward is in the work. Everyone here shares that mission.”

“And the impact of Mr. Baker’s work reverberates beyond Brooklyn’s political life; it touches education, as well,” said educator Bernadette U. Okeke-Diagne. “I believe young people will benefit from the example set today by the Patricks who traveled here to celebrate with us, and they will learn from this experience.”

Mrs. Violet Payne, commenting on the event’s “historical perspective,” said, “Kids growing up in today’s world need to know this history so there’s no need to recreate the wheel.  The event solidifies why we do some of the things we do to push forward certain issues that relate to the African American community. It is so important for young people to know that there were people back then working to make a difference in the life of the community.  They need to know so they can continue to build on the work started and move it forward.”

Gov.  Patrick, in noting Baker’s extensive contributions to Brooklyn politics, told young people to take to heart the messages of the day and “Believe!”   He also said,  “It’s a good day for Bedford Stuyvesant and a good day for Brooklyn. It’s wonderful to be back home.”

Educator Patrika Wellington, excited by the moment, told us, ‘We only have three African-American governors.  I said to Governor and First Lady Patrick, ‘I’m honored to meet you and see you.’  Relationships and connections seem to always bring you back to Brooklyn.  We are such a mighty spiritual bunch in a mighty spiritual place.”

‘We are Able to Breathe Again’