Chuck Davis, the architect of  DanceAfrica – the largest cultural event in this nation devoted to the African dance experience and traditions, is very clear on his role: he is not the creator nor is he the founder. 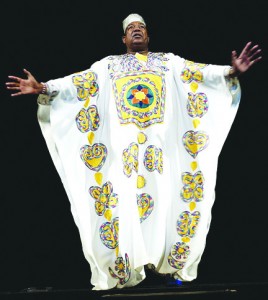 “DanceAfrica is a direct result of what is happening in the community and what has evolved over centuries, and of all the beauty of tradition and history – everything – in all of the cultures spread across the vast African continent,” he told us in a phone interview weeks ago from his North Carolina home.

“We have a world of knowledge explored and unexplored,” he said. “My role is to make people aware of the existence of those traditions as we destroy negative images of people of African descent that have been thrown out there for such a long time. Traditions born in Africa are spread throughout the world and  touch every aspect of culture and dance in the universe, so  we must pay homage to it. That is my role. I walk in the footsteps of the ancestors who lead me in the right directions.”

And he also is forging a path of his own.  He has carried DanceAfrica from its Brooklyn start 33 years ago to several other cities in the nation.  And he has embraced more than 100 dance companies, groups and ensembles that have performed in Brooklyn annually since February of 1977.

Baba Chuck is tirelessly passionate “about just how fantastic we are as a people and their contributions to not only dance, but fashion, music, culture, the arts and more.”
All of modern dance and every modern dancer are in debt to Africa, he says.  “Not only is it important to recognize that, it is imperative that we preserve the knowledge and the facts.  DanceAfrica takes pride in who we are and where we come from and in preserving the traditions.
“Are you aware that in some areas of Africa there are no drums; there is handclapping, blowing on twigs.  A leaf can be made to sound like a Jewish harp.”

“Our dress is not costume; it is depiction,” he says. “Through the fabrics we wear, our heritage is recognized.  Our attire is handed down from generation to generation. There are even lessons in which ethnic group of Africa fostered which style.”
“With regards to rhythm, we all are endowed with it: One may skip.  One may slide.  One may jump yet, we always return to the earth.”

“Ahhh Swing. Harlem. The Savoy.  Yeaahhh,” he mused about the era that was in the fullness of its life when he was about 12.  “I’m about 7,000 years old now. So I was there. I had at least two generations of lives that hit the Savoy ballroom. I was there with Frankie Manning and Mama Norma Miller, and all the dancers who hit that one special jitterbug corner.  I relate to that place. There was a time when I was there. There was a time when all of us were there.
“You can see those movements and that swing today wherever people are moved to move their bodies.”

Another honor we can give to Africa is the birth of the break-dance, he says.  “The whole style of it came from the nomads of West Africa who made acrobatic dancing a part of their entire culture. Ballet Africaine sojourned through there.  The whip stop, whip-and-turn and all the other movements formed the groundwork.  Children, there, do those dances before they walk, talk or hum.

“Now, you know, our young people don’t wait; they take a move and go with it.
“We constantly remind them that what such artists as MC Hammer, Usher and others are doing is from Africa. My only thing against some of today’s young artists is they never give Africa credit or remind their followers that their style is from Africa.”

Yet, DanceAfrica, the week-long master of master classes for global dance, will continue to give credit where it is due.  Every May over the past 3 decades, the event has merged areas of Brooklyn into a total dance village with a marketplace for local and regional entrepreneurs; free schools of dance instruction for the community; and entertainment, including cinema fest of African films for all ages.

As mentioned, DanceAfrica is alive and well in Washington, D.C. and Chicago and other cities during different parts of the year. We estimate the annual week-long treat has resulted in billions of impressions.  “Audiences are increasing, and it is gaining recognition, more and more people understand its educational value.

“It can only move forward.  It’s like a tide, gathering more and more and more.    We can not just put Africans in one little tiny space and say, ‘Now you exist.’  No, Africa is all encompassing. Everything born there is all-encompassing.  It also is being recognized that that everyone on the continent of Africa isn’t black.”

“I’ve learned from every source I’ve come in contact with.  Everything I know has had an impact.
And Davis, in turn, is having an impact. Two years ago, he expanded DanceAfrica to reach out and touch Weeksville Heritage Center in the Ocean Hill section where a 19th century longshoreman created New York State’s … and possibly the nation’s …first self-sustaining  African American village. Davis coaxes prodigies … from individuals to  cultural organizations – to come out of the shadows.  And join his dance.

Bedford Stuyvesant Restoration Corp. along with Weeksville and other venues is now part of DanceAfrica, so the DanceAfrica village extends several miles.
DanceAfrica “exists to celebrate the community’s African identity.  Weddings, christenings, and other ceremonies have taken place during DanceAfrica.”  As well as a huge celebration of the ancestors and elders preceding the opening of Brooklyn Academy of Music performances.
“We must carry forward the special knowledge the ancestors gave to us – immerse ourselves in it – in order to understand our greatness.

Baba Davis’ role is to show and to let people all over the world know.
This Memorial Day weekend,  DanceAfrica swings  inside and outside of the Brooklyn Academy of Music as it does every year.

Wikipedia Background:
In the 1960’s, Chuck Davis moved to New York to perform with musician Michael Babatunde. When he arrived, Alvin Ailey, Talley Beatty and Donald McKayle were with the New Dance Group at the Harlem Cultural Center, and they appeared in productions at the Brooklyn Academy of Music. Davis also studied Katherine Dunham technique and jazz with Syvilla Fort. In 1967 Davis formed the Chuck Davis Dance Company at the South Bronx Community Action Theatre, later moved to Bronx Community College.

In February 1977, the Chuck Davis Dance Company performed in a constructed African village in the BAM Lepercq Space. The following Spring, DanceAfrica debuted with a day-long African bazaar.  Arthur Hall, Charles Moore, Chuck Davis, Dinizulu, and the International Afrikan American Ballet participated in the festival, which offered five performances in the BAM Playhouse and culminated with all five companies-approximately 70 performers-on the Opera House stage. DanceAfrica is BAM’s longest running performance series-and has become a Memorial Day weekend tradition in Brooklyn.

In the 1980s Chuck Davis added master classes in African movement and music. DanceAfrica 1993 opened with a motorcade procession from Harlem to the steps of BAM. Fifty-two members of the Imperial Bikers Motorcycle Club, each carrying the flag of an African country, were joined by the Council of Elders, artists, and dignitaries for a libation pouring ceremony that included a gigantic carrot cake baked in the shape of Africa. The 20th Anniversary Celebration in 1997 debuted the BAM/Restoration DanceAfrica Ensemble, a collaboration between BAM and the Bedford Stuyvesant Restoration Corporation’s Youth Arts Academy that has become an annual crowd favorite.

DanceAfrica has showcased troupes based both in Africa and the African Diaspora including many from New York. Companies have ranged in style from indigenous African to urban American hip-hop. DanceAfrica has shown that “traditional” African dance is not fixed in time and remains tremendously inclusive and diverse, and that even the most cutting-edge choreography can contain African influences. DanceAfrica embodies tradition, but also a spirit of change and growth reaching back into the past and forward into the future, embracing the links between cultures across the African Diaspora, always bearing the message, “Peace, love, and respect for everybody!”