On the Red Carpet, this Sunday, October 6 …

SActor Saul Williams and Director Alain Gomis will be present at the premier of film, which runs thru
Oct. 13th in Harlem

Part One of Two

A few years ago, the master director Alain Gomis set out to create a film with the master poet/writer/musician Saul Williams in mind for the lead role, but he did not know how to connect with Mr. Williams.  Meanwhile, Williams, on his own personal journey, found himself in Paris far away from the insulating U.S. west coast film scene.  By coincidence, the two artists met.  And the rest, as it is said, is history, a history that has manifested itself in a film triumph, TEY, to premiere this weekend in Harlem, Sunday, October 6 (6:00pm-8:30pm) at MIST Harlem Cinema, 46 West 116th St. (Lenox & 5th Avenues), as part of the Creatively Speaking Film Series.  Costs: $9 -$12.

TEY, meaning Today, makes its U.S. premiere following acclaimed screenings at film festivals around the world, premiering in Berlin in 2012.  It has traveled to over 50 festivals internationally and has won over two dozen prizes including Seattle International’s Emerging Masters Award for Best Director; Del Primio CittaVenezia Award at the Venice Film Festival; and the Golden Stallion at FESPACO for Best Film and Best Actor – a first for Senegal and a first for an American actor. TEY is released by BelleMoon Productions, a San Francisco-based company.

It centers on what one man does with his life with the knowledge that today is his final day on earth – he must die by the end of the day — and how he handles his fate.  Senegal is a star in this fantasy film as well as Williams in the title role, and Anisia Uzeyman, Aïssa Maïga, Djolof Mbengue, and Thierno Ndiaye Doss co-starring.

The film takes place in a village outside Dakar.  A countdown to his transition, it is a reverse journey to birth – a joyous celebration feted by his community as if he were a saint. Chosen to disappear, Satché soon finds himself set apart from those closest to him in beautiful scenes that seek to show elements of friendship, desire, sadness, affection and anger that are usually left unsaid. Satché’s journey from the U.S. back to his native Senegal mirrors director Alain Gomis’ own personal story — born in France to a French mother and Senegalese father  but deeply bound to Dakar, a city that he loves.  Gomis says about Tey: “For me, it’s a voyage… The film was shot in Dakar, this city I love, where I come from… I want(ed) to create a film about reconciliation with death — it’s a dream of life.”

Yesterday morning, Our Time Press was privileged to speak to Mr. Gomis, phoning from Senegal, and Mr. Williams, currently in Harlem.  We said to Mr. Gomis, “We’re calling on the day the U.S. government closes down. Any thoughts on that?”  Without skipping a beat, Alain, responded: “Welcome to the African life …”

Highlights of our conversations with Mr. Williams — whose forceful performance in the 1998 film “Slam,”  still impacts what we do —  and Mr. Gomes, will be presented in next Thursday’s paper. 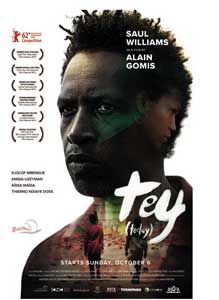 Alain Gomis was born in Paris in 1972 to a French mother and Senegalese father. He directed several short films before shooting his debut feature L’Afrance in 2001, which won awards including the Ecumenical Jury Prize and the Silver Leopard in Locarno. The film focuses on the character El-Hadj Diop, a Senegalese student whose residency in Paris is nearing its expiration. TEY is Gomis’ third feature, and premiered to great acclaim at the Berlin Film Festival 2012. The film just recently won the prestigious Golden Stallion at the FESPACO 2013 for Best Film and Best Actor, a first for Senegal and a first for an American actor.

Saul Williams was born in 1972 in Newburgh, New York. He is one of the most well-known figures of the hip-hop generation as a poet, actor, rapper, singer and musician. He is recognized for his blend of slam poetry and hip-hop and for his leading role in the film Slam, Grand Jury Prize at the Sundance Film Festival and the Camera d’Or at Cannes in 1998.  For more information:    http://teytoday.tumblr.com  and www.myimagestudios.com. (212) 828-6478.