The Community Council for Medgar Evers College under the leadership of Mrs. Katie Davis, has performed amazing work centering around supporting students through scholarships, developing their leadership potential, and, through the membership, offering role models — well-known and not so known — leaders who blaze trails for those coming up behind them.

When Katie Davis met author Janet Dewart Bell last spring, it was immediately easy to determine that Mrs. Bell would be the author-speaker at the Council’s next fundraiser event. Mrs. Bell, a social justice activist with a doctorate in Leadership and Change from Antioch, had just written a book about trailblazers entitled, Lighting the Fires of Freedom: African American Women in the Civil Rights Movement.

On Friday, September 21st the public and students will be introduced to Mrs. Bell and her book, which offers the stories of “nine women who challenged and broke the system of Jim Crow.” African American women may not be as well known as they should be because “they did not stand on ceremony,” because they, “simply did the work that needed to be done.” Just as Mrs. Davis, herself an institution, has done in the community and with the Council, work that is invisible to the larger public, but effective in changing lives for the better. Her work has raised thousands of dollars in scholarships for deserving students over the years. 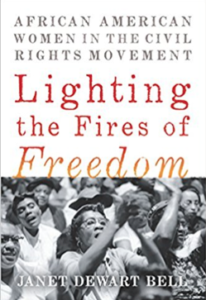 The women in Bell’s book kindled the spirit of the people and moved America forward. The nine trailblazers covered include: Leah Chase, Dr. June Jackson Christmas, Aileen Hernandez, Diane Nash, Judy Richardson, Kathleen Cleaver, Gay McDougall, Gloria Richardson and Myrlie Evers. Ms. Bell had wide-ranging conversation with each of them, listening to the untold stories about “extraordinary struggle for justice” before and during the Civil Rights era, that resulted in “profound social change” afterwards.

In the Brooklyn community, Mrs. Davis is a beacon. For many years, she has worked in a civic capacity and as a volunteer, patron and philanthropist. We asked her to shine a light on some of the women who inspired her when she came to Brooklyn in 1961 from Georgia. She was quick to note them, because, as she explained, they taught her. Those women included Alethia Boddie, Hattie Carthan, Theopia Green, Janie Green, Elsie Richardson and Mary Kay Fish, a classmate who was the first Black in Americus, Georgia to run for the office of Mayor.

These were people, like Katie’s ancestors, who had that spirit of not accepting what was given to them, not waiting to be given anything. Their spirit reminded her of her grandfather, John Colvert, who accumulated 1,000 acres of land though he could not read nor write and taught his daughter how to lead in a very special way. “He would have my mother, from grade school, read the Atlanta Constitution to him every single day.”

Davis lived outside Plains, Ga, pop. 150, where everybody knew the “kind, Christian peanut-farming” family of Jimmy Carter, who also lived in the outskirts. But Plains had only a white High School. “Black students passed the high school and at the shared bus stop would be pelted with rocks thrown by the white kids,” said Davis. And they never made the mistake of getting on our buses because the front of our bus was painted black. We grew up in an atmosphere ripe for rebellion.

“Some of what those women (in the book) faced happened all over the South, women guarding, women helping, women protecting, women strategizing, women standing up and women leading.

With the young people active, small towns woke up. The high spirit and determination was backed up by older women who had faith and gave what they could, with whatever skill they possessed – if it was cooking, singing or just opening the doors to their homes. They were moved by the bravery and courage of the young people to stand up to those in power. The young people changed minds by their bravery and their questioning. The mothers saw that their young would rather die if they could not be part of the change. And mothers, fathers, grandmothers, grandfathers, out of fear for the lives of their offspring, did all kinds of stuff to back them up. The Civil Rights Movement was like a wave that started in the South and spread throughout the country.”

By the time of the Civil Rights Act of 1968, Davis had turned her rebellious spirit into focused intent to get an education. She earned a two-year degree in nursing, passed the state board, worked for ten years in the field, and then, as a young mother of two daughters, received a B.S. from Hunter College and then a Masters Degree in Public Health Administration from Columbia University. She was Deputy Director for Administration at Kingsborough Psychiatric Center in Brooklyn prior to her retirement from the New York State Office of Mental Health.

Inspiration came from Congresswoman Shirley Chisholm and George Lawrence, past-pastor of Antioch Baptist Church, where Davis currently serves as Vice Chair of the Trustee Board, under the current pastor, The Rev. Robert Waterman. Inspiration also came from the church. “Did you know that the Black Panthers organized their first Brooklyn Breakfast program at Antioch?” We did not.

Making history and recalling and sharing it is very important. Though she believes that art may not be as strong in this technological world as it once was half century ago, the history in as much detail as possible is so important, she notes. That is why Bell’s work is so important. Women, she said, helped her navigate the system to make it work for her, and now as president of the MEC Community Council, she is doing the same for others. An active civic leader, Mrs. Davis has served on the boards of several organizations in Central Brooklyn and is entrenched in voter registration efforts. She educates and encourages young people to register, become informed voters, and to vote, ultimately cultivating their leadership potential. “I believe God has different people in different places doing different things at different times.”

Davis’ grandfather owned a thousand-acre cotton farm – he ran a business. Even hired people. And he taught his daughters. “We still have 300 acres in Marion County. One daughter passed away many years ago of sarcoidosis. Another, Charlene, a former literacy coach, teaches at an elementary school in District 18.

But Katie’s leadership spirit continues to drive those around her. She had the road fronting her grandfather’s property in Marion County named for him, John Colvert Road.

“It’s easy for her to identify the trailblazers in her life, but she does not claim that title so quickly for herself. I do what I can for the young people and give them work to do to help them be leaders.” What she and the MECC Council have done is award more than $200,000 in scholarships over the years.

And what is a leader? She referred to Bell’s book for the answer, noting, “There are different kinds. For the community, we must be Servant Leaders. They do not take over. They have a vision of what has to be done. They’re not just looking at immediacy. They help others around them to develop the process to get to the vision. They appreciate ideas from other people, as well as those brought in by young people from their generation.

“They are patient, courageous, strong in their faith. They are listeners. They move forward, but they know they can’t do it by themselves.

‘Leaders support people around them. And respect is a main characteristic. They teach by doing.”

Mrs. Davis was quick to note that Janet Dewart Bell, the widow of the scholar Derrick Bell, Jr., was such a leader and like the women she writes about in Lighting the Fire for Freedom, is leading the way in this Civil Rights Movement of the 21st century. “Also, Hazel Dukes and Marcella Maxwell,” Daviss says.

Mrs. Davis met Janet Bell at Medgar Evers College June 2018 commencement. Ms. Dukes and Ms. Maxwell introduced David to Bell over lunch. After learning of Lighting the Fire for Freedom and its theme, Davis asked the author, architect of the Derrick Bell Lecture on Race in American Society series at NYU School of Law, to present at the Council’s fundraiser the next night.

One of the Council’s objectives is not to only to raise money, but to reach out to the community to be stakeholders in the futures of young people, and to meet little-known stakeholders.

The community will get a chance to meet two great women, Janet Dewart Bell and Katie Davis, tomorrow evening. Hosting the event will be professor, writer and scholar, Dr. Brenda M. Greene, Founder and Executive Director of the Center for Black Literature, Director of the National Black Writers Conference and Chair of the English Department at Medgar Evers College.