Antioch Baptist Church, a strong beacon in the neighborhood of North Brooklyn and beyond, launched year-long celebration of its Centennial milestone with praise, grace, music, song, dance and jubilance. 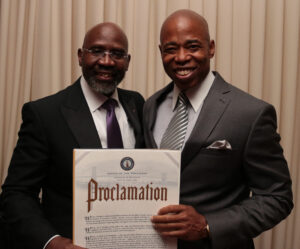 “For 100 years, Antioch has been committed to empowering our community and promoting its optimal health through fellowship, outreach and many ministries,” Rev. Waterman told Our Time Press. “Our anniversary theme is 100 Years of Rising, Restoring, Reaching, Rejoicing, but we give honor to God first because we Rise through God’s empowerment, overcoming challenges. We are a sacred vessel for “restoring souls,” and we are “reaching through our teaching and our out-reaching.”

“We rejoice because we are thankful beyond words.” 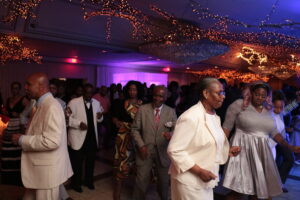 The rejoicing could not be contained in one day: it erupted over three, starting Friday, August 10 with a joyous meet-and-greet August 10, there was an official meet-and-greet and welcoming fish-fry dinner, as the church membership, families and individuals, poured into the community, some from out of state, to give honor to the milestone and the ABC Family Reunion. The following Saturday morning participants and guests returned for a fish-and-grits dinner. Then Sunday, August 12, the day-long salute including a spectacular morning worship service of grace, music, praise, liturgical dancing, the reading of the church history, the message of Rev. Waterman and testimony of the internationally known evangelist and recording artist Dorinda Clark-Cole.

Later that evening, the pastor hosted Antioch’s lavish 100th Anniversary Dinner Banquet at El Caribe Catering. It was a rousing event attended by special guests including Annette Robinson, Borough President Eric Adams, and a host of judges, and community leaders, young people and the pastor’s family. On this page are photos of the dinner-dance.

Saturday, September 8, 2018: ABC’s 100th Year Anniversary Parade and Block Party celebration to include a parade route starting at 9:00 AM from Downtown Brooklyn, Antioch’s original location site at 100 Duffield Street and culminating with a block party in Bedford Stuyvesant – at the church’s current landmark home (828 Greene Avenue, between Lewis and Stuyvesant). The block party kicks of at 1:00pm to 7:00pm. Confirmed to attend: The Black Cowboys, winner of The Miss Brooklyn Pageant and community leaders.

Next week in Part II, Our Time Press presents program images of the worship service and highlights of Evangelist Clark’s sermon and messages.