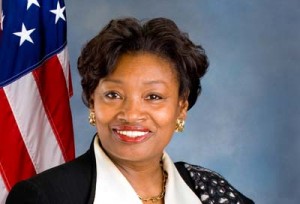 The NYS Senate Democratic Conference has elected Andrea Stewart-Cousins (D-Westchester) to lead their conference. Stewart-Cousins made history by a vote of 19-6. Senator Stewart-Cousins succeeds Senator John Sampson one week after he announced he would step down from the position. “The leadership that existed – Sen. Sampson — was really very good, really solid. He laid groundwork for us,” said Stewart-Cousins. “We have a really good opportunity to look at a new direction, to focus on a progressive agenda, whether it’s campaign finance reform, tougher gun laws, mandate relief, women’s reproductive health. All of these things we are looking at. It certainly is an opportunity. So we thought that new leadership, a vision going forward would really set the pace for what we consider to be a great opportunity to pursue and actually obtain a progressive agenda for a state.”

This is not the first time Stewart-Cousins has made history. Prior to her election to the NYS Senate, she was the first African-American woman county legislator from Yonkers. “I was very excited about being a public servant. I still am. I was excited to be a senator. And I certainly want to advance the agenda of the people of the state and the constituents that sent me here,” said Stewart-Cousins. “So, [becoming Conference Leader] was not a big objective that I had. However, as events unfolded it became clear that many of my colleagues approached me and asked me if I would consider it. I think that it was good that I did.”

Speaking of her conference, Stewart-Cousins spoke of its diversity. “We have a lot of new members. There are about 14 new members. A lot of people that were there before are no longer there,” said Stewart-Cousins. “Our conference is extremely diverse, but it is inclusive. We have members from upstate and downstate, Hispanic and black, we’ve got many more women, we have openly gay members. Everybody’s here.”

Referring obliquely of a risk of voter disenfranchisement due to the coalition between the Senate GOP and the Independent Democratic Conference (IDC), Stewart-Cousins said, “The reality is we are a numerical majority; there are so many voices that should be heard. We are certainly concerned that they will be muted because of the way this construct is. We hope that we will be not only a statistical majority but a functioning majority.”
Stewart-Cousins has worked with all members of the IDC in the past, and hopes to continue to do so. “We’ve had good relationships working on various issues and I certainly will be extending a hand to Sen. Klein, hoping that he will sit and talk about the things that we can do together again. The things we are looking at — whether it’s the Dream Act, reforming stop-and-frisk, protecting our environment — I believe our conference has in common with the IDC. If we can work together again as Democrats, it would be great,” said Stewart-Cousins. “I want to begin the dialogue. I don’t know what’s going to happen in terms of any big change now and when we start [the next session]. I am certainly going to make sure that there is no obstacles to us working together. Hopefully, they will agree and we will find some common ground. Who knows? Maybe we can be Democrats just as our electorate expected us to be.”

The day after she was elected Conference Leader, Stewart-Cousins had a meeting with Gov. Cuomo. “I brought colleagues with me. We had an open discussion. We talked about the state of the state and his legislative priorities. Coincidentally, many of his priorities are ours as well,” said Stewart Cousins. “It was a conversation about Democrats being in a position to create the agenda and make it happen. I think he wants to make sure it gets done. We want to make sure it gets done.”

“None of us understands how this new coalition is going to work,” she added cautiously. “We are proceeding optimistically and with the idea that at the end of the day the people’s business – which is what we are all for – will get done.”

Acknowledging that many people have strong feelings about the Senate GOP/IDC coalition, Stewart-Cousins said, “The fact of the matter is when voters go to the polls and expect that they are voting for someone in a certain party, they have every right to think that the person that they have voted for will actually confer and adhere to the policies and objectives of the party.”

Stewart-Cousins assured that the Senate Democratic Conference is interested in making sure that a progressive agenda is passed.

But she warned that if the IDC proposes a watered-down version of progressive legislation to appease the Senate GOP, “No one would be happy about that. We understand that there will be votes that are needed.”
Stewart-Cousins wants to begin the conversation with the IDC “because the reality is things that the governor wants passed and many of the things that are important to New Yorkers, have to have the votes of the Democrats. That is very clear to everyone. We will proceed with the objective of getting these things done. I certainly will not be an impediment to doing the bills that would make New York a better place. Hopefully, the IDC will be a part of what we will be doing.”

“I would hope we are able to do it together,” said Stewart-Cousins. “I would love to do it in a way that is less complex and function as a Democratic conference, but I think that as long as we keep focusing on getting the things that our residents expect to have done for them, we will be fine.”