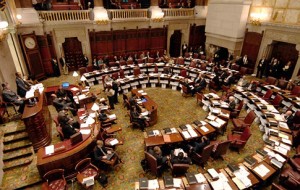 By Mary Alice Miller
Only in NYS could a numerical legislative majority be relegated to minority status. The 2013 NYS Senate can count an absolute majority of 33 legislators, up from 28 in 2010, due to the effective campaigning of former Senate Democratic Leader John Sampson and Michael Gianaris, Chair of the Democratic Senatorial Campaign Committee. But a unified Democratic Caucus was doomed before it happened. After he was elected as a Democrat, Simcha Felder promptly announced he would caucus with Senate Republicans. And three years ago, Democrat Jeff Klein partnered with Senators Diane Savino, David Valesky and newcomer David Carlucci (whose campaign had benefitted from a $700,000 cash infusion from Sampson) to form the Independent Democratic Caucus. Spotting his own self-serving opportunity, Sen. Malcolm Smith decided to add a touch of diversity to the IDC. (GOP Senator Dean Skelos is Temporary President and Jeff Klein is Co-Leader of the Senate with Skelos.)
How does this “minority” status of the Senate Democratic majority harm constituents?

The operating budget allocated to each senator for their capitol and district office spaces as well as staff and constituent services has decreased from about $500,000 down to $350-400,000. As a result, Senate Democrats have had to cut staff hours which undermines the ability to provide constituent services. The mailings budget has been cut to $32,000 which interferes with constituent communications for districts averaging 311,000 people.

But this legislative cycle, the Senate GOP/IDC coalition formally allocated 29% to the Senate Democrats, while they receive 71%. State law required 29% for the “Minority” Conference. So, while Senate Democratic Conference receives 29% to be split among 28 legislators, the IDC’s legal designation of ‘Minority” Conference allows it to also receive 29% which split among the five breakaway IDC members plus Simcha Felder.

In absolute dollars, the rules change plus Gov. Cuomo’s austerity measure to eliminate member items means the Senate Democratic Caucus had to cut needy programs that serve their constituents. For instance, Senate Democrats can no longer fund a church food pantry that serves 1,000 people.

More importantly, new procedural rules enacted in the dead of night require that any progressive bill can come to a floor vote only if it is supported by 2 or 3 Republicans, which is impossible.

The irony is the brazenness of IDC Conference Leader Jeff Klein as well as Diane Savino and Malcolm Smith who has recently acquired the title of Chair of the IDC. All three represent districts comprised of people of color (mostly African American and Caribbean) and majority Democratic registered voters. They all ran unopposed in their districts as Democrats in last year’s primary elections and are now caucusing with Republicans who among other things have refused to pass the state health exchange under the American Affordable Health Care Act (ObamaCare), costing NYS millions in federal dollars.