An SOS Call – We Owe Our Children Community

Listening to Amy Goodman’s Democracy Now daily serves as a reminder that I want a better world for my grandchildren and future generations. That requires seeking ways to resurrect innate intelligences of each and every child.  Observing the lack of respect for human life that exists throughout the country, the people, especially parents and extended family, must become an army committed to our children’s survival and fulfilling their potential.    Our duty as caretakers is creating the absent regard for human life -especially that of our children in this country.  We start on our blocks where youth are being slaughtered physically and mentally – creating opportunities where our children are recognized for what they as individuals bring.   And that might be a challenge because as adults we have been sold the Euro-American value system whose highest-held value is possession of objects; deserting the African value system which held relationships and community as its highest value. 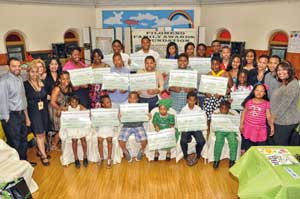 It’s obvious with examples like the failure to pass effective gun laws, the death tolls of civilians  abroad and here especially our children,  the current government shutdown, which interestingly enough was triggered by a health care feud and forces some 800,000 federal workers off their jobs.  However, the payroll of the armed forces was not affected.  Take this as an opportunity to examine the value system of the individuals whose decisions determine the quality, or lack of, in the lives of our families and our communities.   We owe our children more.

Opportunities for Giving our Children More:

Home is the place where children learn from infancy a view of their self-worth and capabilities.  Unhealed emotional upsets within the home leaves unseen scars that causes lack of self-confidence,  antisocial or  negative behavior towards others.   Parents must create the environment at home that gives children the freedom and opportunity to express their thoughts and feelings (that includes complaints about parents).  Suppressed feelings become explosive and triggers hostile behavior towards others, or being a victim to such behaviors.   The Parents Notebook welcomes parents communicating  any challenging behaviors they’re up to resolving in ways that leave their child empowered .  Remember, the transformation of a nation begins in the homes of its people.

On your Block – If any number of children live on your block you’re a candidate for making a difference, shaping their experience of community.  It’s rewarding to be greeted by young adults (now parents)   with memories of the bus rides, sports events, block parties, SCRABBLE clubs held on Lefferts Place when they themselves were children.

Other individuals and families from the block currently serve youth, building a sense of community.  The Filomeno Family Awards Foundation, whose Executive Board , comprised of Angela –the mother and children Jessenia, Jessica, Smilie and Hazel Filomeno– sponsors  an annual Achievement Awards event recognizing  students.   In August of this year, the 7th year, 48 students received  awards  including from Brooklyn’s Borough President Marty Markowitz.

Currently, another resident, Terrence King, who is a supervisor for the Office of Child Support, serves as a head coach and is an Executive Committee member for Brown Memorial Baptist Church’s Ministry in Action, which provides scholarships and other youth initiatives, including basketball teams .  Terrence,  father of three and grandfather of Chasity 3, has been coaching for 20 years which includes Claver Place in Brooklyn,  Each One Teach One in Harlem and at Brown Memorial for the last 15 years.

Terrence started playing basketball at the age of eight.   He played with  a church league  (Christ the King),  received a scholarship and attended Lehman College.  According to Terrence, coaches create a bond with the players that establishes a serious love for the game while teaching how to conduct oneself as an uncle or father would – making it a major contribution to single-parent homes missing male role models.

Basketball was historically a male sport but now schools and colleges have added female teams.  Currently, Terrence has a girls team participating in the Rose Classics, a female tournament  at  P.S.  117, located at Willoughby and Franklin Avenues.  The girls on his team range from ages 10 to 16 and have not played together before this tournament – four – Jasmine, Nailah, Dynasty and Bliss coming from Lefferts Place but not attending the same schools.  Observing them on the court, you would think they played together all the time.

The point is individuals are resources and if we share, block-by-block, we can create cities where communities flourish and the senseless violence ends.  Readers are invited to take inventory of resources on your block and share with parentsnotebook@yahoo.com.