An Interview with … DR. MAYA ANGELOU The Writer's Message to the People of Brooklyn and Beyond

Scholars will spend their entire careers and earn their doctorates studying the papers of writer and poet Maya Angelou now that they are housed in Harlem at the Schomburg Center for Research in Black Culture, a branch of the New York Public Library.  We were honored to speak with Ms. Angelou about this  acquisition for the library to be officially announced Friday, October 29 at the Schomburg Center.

Our Time Press: Reading your letters was reminiscent of an older Harlem, of civility and dressing up to stroll on Sunday mornings.  How has Harlem changed for you over the years? 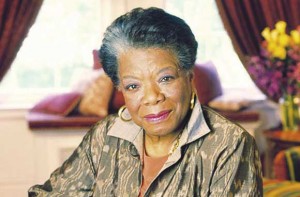 OTP:  Speaking of opening up, I remember you and Amiri Baraka dancing at midnight in celebration of Langston Hughes over the picturegraph of  A Negro Speaks of Rivers.
Maya Angelou:  Yes, it was reported as two of America’s great poets dancing an African traditional dance for Langston Hughes.  I asked Amiri, “Were you dancing a traditional African dance?”  He said, “I was doing the Jitterbug.”