After the Massacre – A Call to Action! 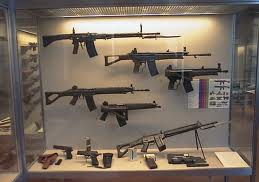 The recent massacre in Connecticut sends a sobering message that can’t be ignored.   While reactions differ and debates over gun control ensue, the fact that 20 elementary school students lost their lives within a school building – is a wakeup call.   It’s crucial  that  parents, caretakers and relatives  realize that ultimately the lives of our children (or put another way whether our children live or die) depends (to a large degree) on our ability to provide physical  and emotional grounding; arming them to navigate through a world that sorely needs an enema.

While  details about the killer is sketchy, reports of a turbulent  and hostile relationship between his parents ending in divorce and left untreated  most likely contributed to his malfunctioning  and the mother’s  apparent passion for collecting guns raises questions about her state of mind.

We wait to see what President Obama and government is going to do regarding gun control and the debates continue bringing to surface some little known or forgotten statistics on gun violence – especially mass homicides and suicides continuing here in America.

Peters, who was chairperson of the National Coalition for Gun Control, led the campaign that resulted in the Australian government enacting a bipartisan gun control measure 12 days after the Port Arthur Massacre.  She said that for the prior two decades, there had been one mass shooting per year.  Since the Port Arthur Massacre in 1996, there have been no mass murders in Australia. Similar to the United States, there were numerous states with their own laws but with a common goal of saving lives and expenses, they produced a result.  While we wait for our government to show regard for human life, families and communities must seize this opportunity to take on the challenge to restore individuals, especially our young to their inborn greatness.

Terrie Williams has a B. A. (cum laude) in Psychology and Sociology from Brandeis University, and an M.S. in Social Work from Columbia University.  She continues to work tirelessly to reach out to individuals who have suffered or are now suffering—from the struggling high school student to the successful executive who puts forth the daily “mask”, to the gang member, the incarcerated and those who served time but were later proven innocent. Her drive to “save the world” leads her and the efforts of The Stay Strong Foundation to urge corporate and individual responsibility and to offer educational and leadership workshops, internships and mentoring opportunities for youth.  Author of Black Pain; It Just Looks Like We’re Not Hurting, she shares her internal emotional struggle.  E-mail: tmwms@terriewilliams.com

The 21-day Umoja Project – a project  where parent and child select something within their relationship or family that they want to change and create a program for change.  Based on the research that it only takes 21 days to break or form a habit, participating family members are empowered with the tools to  recognize and clear emotional clutter, identify  areas of needed change,  take responsibility for changing them, are supported during the time and acknowledged for their victory. For details e-mail: parentsnotebook@yahoo.com.

Remember All the Children, Mr. President

by Bill Quigley  published on Monday Dec. 17 by Common Dreams and read on WBAI’s Hugh Hamilton on Talk Back. Bill Quigley is Associate Director of the Center for Constitutional Rights and a law professor at Loyola University New Orleans.  He is a Katrina survivor and has been active in human rights in Haiti for years.  Contact: quigley77@gmail.commore Bill Quigley

Remember the 20 children who died in Newtown, Connecticut.

Remember the 35 children who died in Gaza this month from Israeli Bombardments.

Remember the 168 children who have been killed by US Drone attacks in Pakistan since 2006.

Remember the 231 children killed in Afghanistan in the first six months of this year.

Remember the 400 other children in the US under age of 15 who die from gunshot wounds each year.

Remember the 921 children killed by US air strikes against insurgents in Iraq.

Remember the 1,770 U.S. children who die each year from child abuse and maltreatment.

Remember the 16,000 children who die each day around the world from hunger.

These tragedies must end.