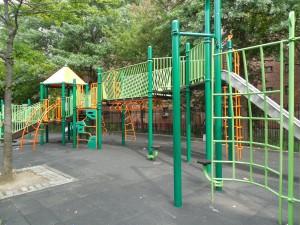 A cultural and economic turf war between African-Americans and Hasidim Jews continues to brew in Bedford-Stuyvesant with the park attached to the Marcy Public Houses along the Myrtle Avenue corridor being the latest battleground.

The difficulty began about a year ago, according to Marcy Houses Tenants Association President Naomi Colon, when about 40 Hasidim Jewish kids from the Satmar sect, who has been buying up, developing and moving into a large swath of northern Bed-Stuy, took over a basketball court.

“They seemed to think when their kids go on the playground our kids had to leave,” recalled Colon.

Colon said she had a meeting with a local rabbi and things settled down after the rabbi agreed to not bring so many kids in the park at one time. However, problems continue, she said, particularly in a perception that the housing police allow Hasidim to utilize the development and the playground, which closes at dusk, without ever being stopped.

“They walk through here like they own the place and sit on the benches after nine. I’ve seen two male Hasidim there (in the park) all night and when my children or guys walk through that park, they get tickets,” said Colon. “I find that to be discriminatory that Hasidim can be there all night.”

Colon also alleged that Hasidic men sit in the development near 472 Marcy waiting for vagrant women, who sometimes practice the world’s oldest profession.

“Some (of these women) find easy clients,” said Colon, taking nothing away from the ultra-religious nature of the Satmar sect. “They (Hasidim) are men at the end of the day.”

Democratic District Leader and City Council Candidate Robert Cornegy said he has been made aware of the growing anger in the northern part of the Bed-Stuy council district where the two groups share the territory.

Cornegy said on the other side some of the Hasidim have complained of young men of color congregating and posturing in an intimidating nature.

The politics of the situation has been further complicated by the city’s recent re-districting of the area, putting a portion of Bed-Stuy with a growing Hasidim population – between Nostrand and Classon avenues, and Flushing and DeKalb avenues – into City Councilman Steve Levin’s district, which includes Williamsburg, DUMBO and Brooklyn Heights.

However, there remains a growing Hasidim population along the Myrtle corridor east of Nostrand Avenue and south of DeKalb Avenue – all of which is in term-limited City Councilman Al Vann’s district.

Rabbi David Niederman, the executive director and president of the United Jewish

Organization of Williamsburg, which provides many social services for Satmars, said he is not aware of any problems surrounding the Marcy playground or along the Myrtle Avenue corridor, but disagreements among neighbors is not unusual.

“When neighbors have issues it’s not black and white, Jew and gentiles. It is neighbors that disagree and should not be a political issue. I’m sure it (the situation along the Myrtle corridor) will be solved appropriately,” said Niederman.

Niederman said the movement of Satmars from south Williamsburg into Bed-Stuy is an extension of natural population growth from that community,

and that any African-American fears of an overwhelming number of Hasidim moving into Bed-Stuy is misguided.

“We believe we share the same needs and should be able to work closely together, as we do in south Williamsburg

with the rest of the community,” said Niederman. “From time to time we will have some disagreements, but doesn’t take doesn’t take away from the issue that by working together and sharing the same environment all of our needs will be much better addressed.”

Niederman said some of these needs include more affordable housing built for everyone, and he envisions a low-income housing development with a mix of Hasidim and African-American residents.

Niederman said he met with several of the candidates running to succeed Vann, which besides Cornegy, includes Reverends Conrad Tillard, Robert Waterman and Kirsten John Foy. However, he said it is doubtful that the Hasidim, who are known to vote in a block, will support any one candidate in the September primary.

“I feel and hope that the Bed-Stuy community will elect somebody good and fair, and ready to work with all the residents and constituency within the district and unite them,” said Niederman.