On July 11, 2009, a man was sitting on the stoop of the Walker family home at 370 Lafayette Avenue. Because the house is a few doors down from a suspected drug house, Mr. Shem Walker was accustomed to shooing away loiterers from his property. In the past, the drug dealers or street people who were sitting, simply left. But this time the man Mr. Walker confronted to leave the property was an undercover police officer, and this time Mr. Walker was shot dead.
It’s been a year since the shooting and District Attorney spokesperson Jerry Schmetterer said that nothing has been referred to the DA’s office from the police department. The NYPD has also given no word to the family on what, if anything, is being investigated. Family and friends remember Shem Walker. 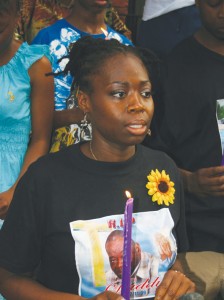 One year ago today, the person who I saw as my hero, my Savior, other than Jesus Christ, was killed right here.   Only my family can feel the pain that we feel every day walking back and forth.  From a place that was supposed to  be a sanctuary.  But it’s not the same.  The person who took my father’s life is still living his life day-to-day.  Going home to his family.  Smiling and laughing.  And he doesn’t feel the pain that we feel on a daily basis.
The sentimental things, the laughter.  The jokiness.  Just the kind person that he was, we no longer have.  Is it fair?  I think not.
Do we need justice? Absolutely.  Will this justice system fail us?  We shall see.  It is up to us as a community to rise above this and take a stand that this will not happen to anyone again.
I’m making a plea right now, to those in the neighborhood.  This step needs to be precious.   To hang out on the step, which is the reason why my father got into a scuffle, is wrong.  I’m just asking that there should be no trespassing, period.  That’s a plea, a personal plea from me.  I come here, I pass here so many times, and when I pass here and I see people standing here and I say “It’s happening again.”
If my dad was here he would tell you to come off the stairs.  Why is it still happening?  A life was taken from us and we’re still having the same perpetuating behavior.
Today, I’m making a plea to the community: We must all stick together and take a lesson from what happened here at 370 Lafayette Avenue, July 11th, last year.
My father is gone from us, but he is still not forgotten.  We have two lovely new additions to our family and we’re blessed.  God took one away from us but he brought us back two. We’re living through them, thank you. 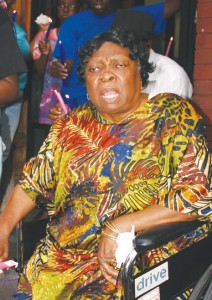 “I was Shem’s mother.  Last year on the 11th, a Saturday evening, Shem went to the fast-food store and he bought me some food.  He came in and give me the food, but something wasn’t right.  So I said, ‘Shem, I can’t eat this food, you take it.’  He emptied my bowl into his plate and went into the kitchen and ate.  When he finished he went outside and he had a piece of cake.   He put the piece in my mouth and he said, ‘Mommy, I’m going to get a smoke.’
“The next time I saw my son there he is in a casket. Died.  What for?  They say he went to the store and he came back and he sees somebody sitting on the steps.  Don’t mind how abrupt he said to the man, ‘Get off!’ or ‘Move!’  How come my son ends up dead?  You mean to tell me two trained police, one on this step and one on the next step.  They couldn’t subdue one innocent, unarmed man without using gun force?  I don’t think this is it.  I just don’t think that is right.  So all I’m asking for now is for justice.  The man who killed my son, and it was like he killed me.  My sight has gone since then.  All I’m asking for now is justice for my son.  Justice for Shem.” 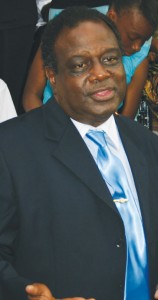 What I know of Shem, he’d come from Pennsylvania on weekends, get his mother on Sunday mornings and bring her to church. He’d bring his car up on the sidewalk, take his mom out of the car and put her in the wheelchair, get her into the church, get on the elevator, bring her up into the sanctuary and she sits right in the back.  When church is finished, Shem comes back again, gets his mom in the reverse order and brings his mother home.  I don’t know all the other pieces, but I can say I saw that this was a son who was very loving, very caring and very dutiful for his mom. And I believe that’s a golden heart that he took the time to be there for his mother, in the house of the Lord, week after week.  I want to honor the family, especially the young man who is currently bringing his grandmother, Sunday after Sunday, he brings her to church.  That’s the same thing that Shem was doing.

The Walker family is pursuing a civil action, but the District Attorney should at least reach out to the family and explain where things are at this time.  Whether or not there is an active investigation. Or whether it’s closed, and if closed, why?  I think they are owed that reason and that explanation.  A year without justice for Shem Walker is really unfortunate.  And without any interaction with the District Attorney’s office, I just believe this family deserves better.
If you’re selling drugs, you are the enemy.  You’re tearing our community apart.  Families have been torn apart by drugs.  It’s because individuals sold drugs on this corner and at that corner at Classon Avenue, Shem is not here.  We want a community where our mothers and grandmothers are safe and where children can play without worrying about drug dealers.  Let this message be the message we take away from the life of Shem Walker.  That’s the message here today. Justice for this family, but also at the same time (community), we have got to stand up and do the right thing. 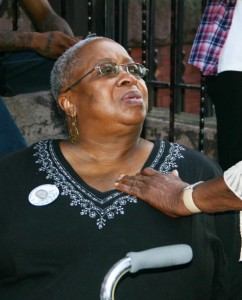 It’s been one year now since that cop shot my nephew on these same steps.  They said they were undercover. The guy was sitting on the steps and my nephew told him no loitering here and told him to get up.  His partner came up the steps and told my nephew he couldn’t tell the guy who was sitting on the steps to move. My nephew told him there was no loitering and he took his gun out and shot my nephew twice in the chest and in the forehead.  This is a family building.  My niece came out.  And if someone comes out and says this is my brother, they still took him to the hospital as a John Doe.
Since then, there has been nothing.  The case has not gone to a grand jury or anything like that.  One year.  Nothing has happened.  All they’re saying is that they’re investigating.