A Salute to The Pearl

Exclusive to Our Time Press 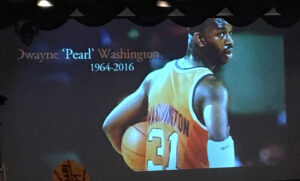 Photo-archivist Thor David, former Boys & Girls H.S. instructor, and writer Rich Mason, co-authors of an upcoming book covering a quarter century of Brooklyn high school basketball sports (1980-2005), reflect on the athlete whose example and achievements on the courts inspired their work. Mr.
David’s black & white images of Dwayne Alonzo Washington in action as a star at The High are some of the earliest images of #31 By Thor David and Rich Mason

As I write this article on our brother Dwayne “Pearl” Washington, I reflect on my Brooklyn roots. While growing up in East New York, Brooklyn in the early 1980’s, Pearl was a major basketball figure to the youth in this city. With not many resources allotted to the NYC streets back then, basketball became a true refuge and outlet for the talented youth in this city. The playgrounds became a community within themselves in every section of New York.

Decades before Twitter, Facebook & other social media outlets, Pearl’s name was talked about on every basketball court in NYC and the nation. Some posit that Pearl’s reputation was growing before Hip-Hop or Mike Tyson, with him being the top HS basketball player in America.

Some even argue that the “golden era” of high school basketball & Hip-Hop had the same timeline of conception. While the young boys & girls in the city were displaying their amazing skills on the streets, playgrounds and gyms, DJ’s, Break-dancers and Graffiti artists were displaying their unique talents in neighborhoods throughout Brooklyn, Queens, Manhattan, Staten Island & the Bronx.

While my older brother Odell “Big O” Grier was visiting our aunt, Vicky Norlin, who lived in the Howard Houses in Brownsville, Brooklyn at the time, he would tell me about Pearl’s legendary street basketball games held on the courts at Seth Low & Howard Housing Projects.

Pearl was only 14 years old playing against older boys and grown men in those games. Needless to say, he marveled and dazzled everyone who was there, and everyone who played against him. All you heard was yelling, cheers and applause back in those days, your rep was larger than money.

Unfortunately, I never received the pleasure of meeting Pearl in person. Our path never crossed for some reason. While working from 1980 to 2005 as a NYC schoolteacher at Boys & Girls HS, Thor’s first photography subject was Dwayne Pearl Washington. Pearl began Thor’s photography journey at the very start. He shot pictures of Pearl for the 3 years he was playing at Boys & Girls High School. Ironically, Pearl’s pictures were the first images I found in Thor’s photo collection to begin our upcoming photography book, which will be released soon.
This book will also be sold & translated in Mandarin for the youth in China.

As I dug deeper into Thor’s storage crates, I discovered more photos & negatives of Pearl that were never developed or seen in the 35 years since they were taken. We discovered historic photographs of him playing at various tournaments such as the Kangaroo Classic & Wheelchair Classic. We found photos from legendary games against Thomas Jefferson HS, Wingate HS, Bishop Loughlin HS and other historic images. We even found one of him playing against the legendary point guard from NYC, Mark Jackson.

With back court support from Pearl’s former teammate Elmer Anderson and the team from Boys & Girls HS, they were a force to be reckoned with. We knew that the youth of NYC and the entire world needed to take this same amazing historical journey with these images just as we had.

Pearl Washington’s superior dribbling skills, quick shooting abilities and his knowledge of the game stood out amongst everyone. I recall seeing the pictures of thousands of people packed in every court he played on. I had heard that more adults came to see him play than his peers, but the entire community embraced his grace and abilities.

The air conditioner systems back in the early 80’s didn’t really work well, but no one cared as long as Pearl made it cool to watch.

When Thor and I heard of Pearl’s battle with brain cancer, we reached out to his family & friends to see how we could help. On April 9, 2016 friends & family members all pulled together for a benefit youth basketball game where they retired Pearl’s number 31 at his alma mater, Boys & Girls High School in Bed-Stuy, Brooklyn. Watching the emotional response, unwavering admiration and love from so many people young & old, I knew I was not alone as a youth back in the 80’s experiencing his impact on the game.

Thank you Brother Dwayne “Pearl” Washington, your legacy inspired an entire generation of people worldwide. Your humble nature and skills on and off the court still influence us all.