A Night on Rue Berne:Living on the Streets 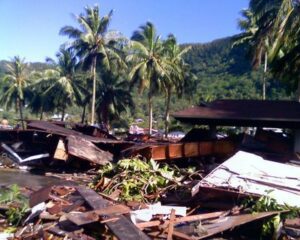 PORT-AU-PRINCE – Dusk had barely set and already, the residents of Rue Berne, were making their beds. These bedrooms were makeshift and arranged neatly on one side of the streets, away from shaky walls and fragile home frames that remain so dangerous.

The men erected barricades, leaving enough room for a vehicle to navigate the tiny canyon. Soon they share whatever they had, pasta or rice with smoke herring. A few hours later, mothers tucked their children in near their belly and they started to listen to the news on battery-operated transistor radios and by 8 P.M, some people had already begun falling asleep.

“You see what we’ve become, “ said Herold Joseph, who was born and raised in this longtime middle-class enclave. “The streets have become our home, no different from the stray dogs that we used to chase with sticks and stones.”

Joseph’s house, a squat tin-roof-covered house now sits feeble like every other home in Rue Berne, victim of a fierce earthquake that almost totally destroyed this capital city.  In its wake millions have been displaced, their lives forever changed.

The death toll so far has reached 50,000 people, but the misery index remains countless and will never be fully-known. Millions of people completely lost their homes and other houses are too unsafe for people to venture inside, rendering this city a giant homeless shelter.

The scene at Rue Berne was similar in every block in every neighborhood of this capital city, wringed by gentle mountains. In many ways, those in Rue Berne are better off than many. Those who cannot sleep among friends in the streets, have sought shelter in courtyards of various government buildings such as the Prime Minister’s Office, the National Television Network, known as by its French acronym, TNH.

In the TNH yard, people brought their mattresses or rags to sleep on as the station produces its live coverage of the calamity.

“We’ve been the best in terms of television coverage,” said Pradel Henriques, TNH general director. “You have to remember the rest of the country, particularly the area north of Port-au-Prince do have electricity and we’re the only station that covers the entire nation.”

Henriques said that he was worried that he may not be able to continue his coverage because equipment was being strained and broke down, and he was running out of tape.

But unlike on Rue Berne, these dwellers are permanent with nowhere to go during day time. It is their home. As the few hospitals still functioning, are overwhelmed with bodies, these government yards have been turned into makeshift health centers. Foreign doctors and their Haitian counterparts, deliver babies – most of them born prematurely, induced from the shock their mothers suffered.

“It’s very sad, “ said Fernando Gomez, a Dominican physician who sought permission from Henriques to remove an expectant mother from the yard to the Dominican border to deliver the baby by Ceasarian section. “We’re just glad we can help our neighbors during this tragedy. “

Dr. Gomez said he has worked almost non-stop going from government offices to health centers to treat the injured.

Though this was a natural disaster, man has played a large role in the calamity. For nearly four decades, Port-au-Prince, once a bucolic town of professionals, has grown into a giant slum with haphazard construction and makeshift neighborhoods.

The degradation began in the early 1960’s when dictator Francois “Papa Doc” Duvalier began bringing busloads of peasants from the countryside to come and sing his praises when the shunned leader had foreign dignitaries visiting his country. But the sinister Duvalier gave them a one-way ticket and seduced by the lights of the big city, the country dwellers stayed and abandoned their farms.

One such creation is the infamous Cite Soleil.

Once there, they erected tin shacks and  above poorly-built cement with no sewer lines or electrical grid.

Over the years, Port-au-Prince, a city built to handle 200,000 residents, mushroomed to nearly 2 million. That number is an estimate because there hasn’t been a Census taken in nearly three decades.

“I’ve been saying this for years,” said Dr. Mathurin, a geologist. “But I didn’t have the proper pedigree and so I wasn’t taken seriously.”

Dr. Mathurin, while being interviewed on Radio Signal FM, said that a Purdue University study had pinpointed this earthquake within a week of its touchdown in Haiti.

He also said that in a way, Haiti was lucky because two earthquakes hit Haiti but their path crossed, limiting the impact.

“We were lucky we got the aftershocks instead of the other earthquake that was to follow.”

As the dawn was settling in, residents gathered their makeshifts bedrooms and quickly whisked them in their courtyards and cleared the streets. They bathe, wash their teeth and try to live a normal life.

He and a group of men head off to survey the damages as if heading to work. But their task is to look at the debris and destruction that have become their beloved city.