A Night of Honors …

It was a night of honors and more at last Saturday’s fundraiser for the Magnolia Tree Earth Center of Bedford Stuyvesant, as the conjoined spirits of two great women — Hattie Carthan, founder of the Center, and Marcia Goldman, the president emeritus – moved through the event, from idea to planning to development. 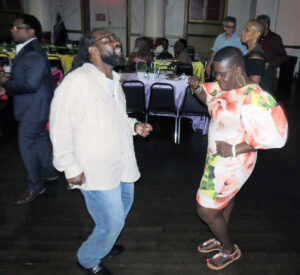 The selection of the honorees was not a difficult task. The names of Safiya Bandele, and Evelyn Castro easily came to mind, thanks to administrative assistant Andrea Brathwaite, and they were quickly approved.

There was no debate on who should keynote. For the Chair, David Greaves, and Advisory Board member Bernice Green, there was no other choice than Al Vann – a member (then the youngest) of the famed game-changing Hattie’s Angels circle. 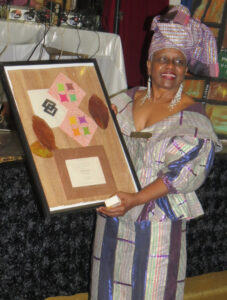 During planning sessions, the Board, in accordance with Ms. Carthan’s expressed grassroots missions for the Center (that it be a site for neighborhood children and families to learn about ecology, environment, the natural sciences and all that relates to them) worked to incorporate a child into the program. They did not need to work hard. Andrea recalled that the Chair’s granddaughter, Chelsea Williams, 10, is a crafter, and had inherited fabrics from the the late Marcia Goldman’s extensive bounty. Miss Williams, mentored by artist/art educator Barry L. Mason in his Mt. Vernon studio, designed the award and layout. The final product comprised Quilt patches made by Ms. Goldman’s own hands; and fallen leaves from the magnificent grandiflora so loved by Ms. Carthan. The spirit of Africa was incorporated at the influence of Miss Williams’ mother through the incorporation of fabric scraps stitched with adinkra symbol details and the use of real Egyptian bark as the mat background.

Mr. Vann’s moving keynote held the audience spellbound. It was generous in painting a picture of the broadstrokes of New York City and national 1960’s history – when extraordinary ideas followed by extraordinary action gave rise to such Black institutions as Hattie Carthan’s Magnolia Tree Earth Center. Known — like his colleague the Hon Annette Robinson, who also attended the event – as an orator who needs no script nor notes, Mr. Vann made the astute connection between majesty of Ms. Carthan and the will of Malcolm X, whose birthday anniversary was that day. “If you want to measure who you are, measure against X,” stated Vann to the audience. “[Malcolm X] told us to stand up. You can’t be ridden if you are standing up.”

He led all in attendance in a “Happy Birthday” shout-out to Malcolm. He lauded the audience for supporting Magnolia’s fundraising effort. He applauded the Magnolia Board for its efforts in keeping alive the legacy of his mentor, Mrs. Carthan. He also exhibited the humility and grace he ascribes to Ms. Carthan and Ms. Goldman, a former close friend by thanking Mr. Greaves and Ms. Green in a special way: “There is a time to be a mover and there is time to move on,” but “the respect that I have for David and Bernice is so profound that it was hard for me to say no.” 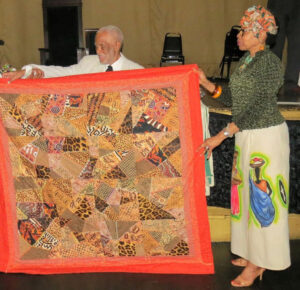 It was an evening of giving in the spirit of the times that shaped the need for a place such as Magnolia Tree Earth Center. Quietly, out of view, at the Silent Auction table, a friend of the Goldman family, Mr. Louis McG. Walker, won, at bid, several artworks by such masters as Leroy Clarke, Tom Feelings, James Denmark (a signed poster) and one of Ms. Goldman’s handmade quilts from the family’s extensive collection, and works by Leroy Clarke, Tom Feelings, and others.

Dr, Olivia Cousins, the educator/artist/photographer, assisted tremendously at the Silent Auction table and then bid and won several pieces, including Ms. Green’s copy of the 1969 edition of Ebony with a cover story on Betty Shabazz remembering her husband, Malcolm X and works by such artists as Ernie Banks and Tom Feelings, among others.

Vanika Mock bid and won the super king-sized-plus quilt with pillow items handmade by Ms. Goldman; Curtis Williams, father of Chelsea, won an poster of Marcus Garvey, an original print from The East organization of which the late Jitu Weusi and education pioneer Mr.Vann were organizers.

Priscilla Mensah is an avid reader and scholar whose passions include community development and empowerment. She can be reached at pmensahbrooklyn@gmail.com.