A Church Secretary Leaves a Legacy of Grace, Skill, Power 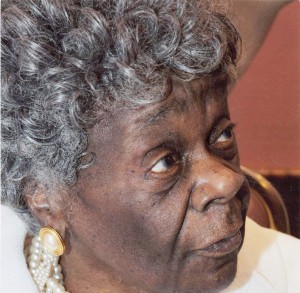 Secretaries play a pivotal role in the lives of those who run institutions. Tireless Administrative Assistants keep the files, the records, the history. They assist. They help. They aid. They offer skills beyond support: they counsel, they lead. They Protect. They are the first line of defense. They are the advisers, counselors. And their business acumen sometimes exceeds that of the executives they serve so loyally.
The late historian/preservationist Joan Maynard told me of Mrs. Rosemary Leach, a stately Brooklynite who served as secretary to the novelist Richard Wright. Mrs. Wright typed Mr. Wright’s manuscripts, organized his papers, answered his correspondence, typed his notes. We can only wonder if Mrs. Leach. Who preceded Mrs. Maynard in death, ever advised on a word or phrasing, edited a line, or even suggested to Mr. Wright, the direction of a story segment or character arc? We will never know.

What we do know is that secretaries have great influence, and church secretaries, in particular, have more.
Our own dear Sister Juanita Berry, Bridge Street Church secretary passed last fall, and was memorialized earlier this year in an elegant regal home going. Miss Berry came into her own back in the day of yellow pads, pens, pencils, scotch tape and mimeograph machines. She did more than keep minutes; her fantastic memory banked thousands of hours of Bridge Street church families’ histories. She was the watchwoman, moving in and out of the lives of congregants at their milestones: births, deaths, weddings, christenings, graduations, cotillions and more.

She rose above the mundane with grace, wisdom, a precious smile and, sometimes, if she really liked you, a brief flutter of the eyelashes. As she handled the correspondence and wet the stamps, she transformed even that most routine office work into a learning lab for young people. They learned skill, order, manners, process. One pastor said that it took computer technology to replace Ms. Berry, who did the work of an office staff. And, of course, to counsel shepherds, you must be the smarter shepherd. And that she was. During her time, she served several pastors, including, most recently, The Rev. Fred Lucas and The Rev. David B. Cousin. (BGreen)
Below: A godchild and legacy heir remembers Miss Berry.
________________________________
Mother Juanita Berry Remembered

Miss Juanita Berry didn’t have any children through natural birth, I and untold numbers are her spiritual children who grew, matured, and ventured out to serve our community and beyond in an a love-steeped effort to continue her legacy.

We are saved to serve and truly; that was Miss Berry’s motto, service. We did this through her love, guidance, gentle nudging, encouragement, prayers, and sound counsel.

My mom Juanita Watts and Miss Berry both served on the Usher Board of Bridge Street AWME Church, Laymen’s organization and various Bridge Street initiatives, became friends and remained so for well over 50 years. My mom volunteered to work in the church office with Miss Berry and did so for over 40 years. When mom volunteered, my 3 brothers and Vicki followed. Church bulletins were prepared using stencils that were pasted and together, ran off on aged mimeograph machines that my brother John had the mechanical skills and often had to fix. Hundreds of bulletins were prepared every week for morning, afternoon and evening services if needed.
Miss Berry was a professor of life, without fanfare; we learned clerical skills, church history, community service, empathy, caring, sharing, giving and we were mentored in love and devotion. All she had to do was to ask and it was done. She was a walking event planner. Her wealth of knowledge you could never find in any university. She has mentored people her entire life. In a thesaurus Miss Juanita Berry’s name would be included in the definition of service and mentoring.

Everyone has an anecdote or gem to share about Ms. Berry. She loved young people and urged us all to be the best we could. It didn’t matter how old you were. There have been some children with disabilities who she made feel so loved and special.

Andy Smith originally from Barbados shared with us how Miss Berry joined with her aunt (Mildred T.) and accompanied her and her husband to witness on their behalf when they became citizens.

No she didn’t have any natural children, yet hundreds of us learned from this elegant woman of God, who taught us by example of the beauty of service. She was behind the scene making everything and everybody look good. Pastors, Rev. Henderson, Portlock, Hildebrand, Foley, Lucas and Cousin have entertained some of the world’s premiere clergy, politicians, entertainers and professionals from every walk of life here at this historic church Bridge Street. Mahalia Jackson a fellow native of Chicago was just one of the national gospel artists who gave concerts here in this very auditorium.

Miss Berry was a master organizer and made your program, or event successful. She loved hymns, anthems and good music. It should be noted that she initially came to New York to study music at Julliard School of Music. She was a master musician, pianist, organist and I had the honor of hearing her play the church’s historic pipe organ.

Miss Berry loved the AWME Church and was proud of its legacy and all that it stood for, serving it with honor and dignity. She worked seven days a week and on so many occasions both she and my mother stayed until the church doors were closed.

The last Sunday of October 2012, Miss Berry took ill in Bridge Street Church during morning service. She did not linger. By that Thursday November 1, 2012, God called her home.

There is a song, “Let the Work I’ve done speak for me.” Miss Berry’s work and legacy will endure for decades to come. She loved the AWME Church and all that it stood for. She served with honor, dignity and grace and was proud of the phenomenal legacy of this church. And Bridge Street is proud of her great contribution to it.