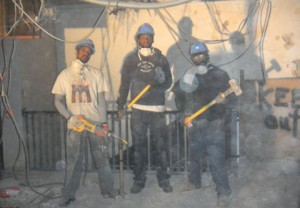 Events around the nation recently celebrated the life and work of Martin Luther King, Jr’s, a noble man whose mission and ministry centered around service to mankind in some form or fashion. He once said, in summing up the spirit of a great nation, “ultimately, (it) is a compassionate nation.”

So we could not let this January — the month we pay tribute to this great leader — go by without a nod to a great, though little-publicized example of people using their resources to serve compassionately on behalf of the good – for brotherhood and sisterhood.

Forty-eight hours before the start of the January 21 community fetes, 500 Men Who Make A Difference, led by founder Wayne Devonish, teamed up with staff and employees of the Amethyst Women’s Project for a 3-day rehab of the program’s headquarters at 1907 Mermaid Avenue, near 19th Street. AWP is housed in an 80-year-old building about three city blocks from the Atlantic. The program was right in the path of Sandy and became a victim of its wrath. Rising “rivers” of water seeping from the ocean seeped up the stairs and into the first floor of the brick building, not stopping its flow until it reached some five feet.
When a relative of Brooklyn faith leader The Rev. Cheryl Anthony informed a member of the “500 Men” group about the AWP project which supports families and children in need, the group stepped into overalls and stepped up to act … with the help of paint, brooms, plastering tools and more.
“We aimed to bring shine to this diamond tarnished by Sandy’s wrath,” said Devonish. “Crisis Intervention & Referral Services for the community are the hallmarks of Amethyst’s missions.”

It was a 72-hour around-the-clock workfest, noted Devonish, who signed on passersby, such as community resident Anthony Torres, 30, a UPS nightworker, on his way to his Coney Island apartment from his job in Secaucus, N.J. “Community service for a good cause is infectious. People want to join in and help. They plaster, paint, run errands, sweep, mop, clean.” And very quickly become enlisted as a member of the 500-Men group.

“Amethyst’s mission centers around restoring dignity and hope to the lives of women and families impacted by life’s adversities. There’s no better tribute to Dr. King’s legacy. We feel he would be right here with Executive Director Aida Leon and longtime volunteer Tom Quinn, other staff members and the 500 Men. He would be working the dream, being active in support of those residents and communities who were hit hardest.”

“Yes. The miracle was in the process: working together,” said award-winning filmmaker-author Bryant McInnis, a father and Bedford-Stuyvesant resident who, amongst other duties, helped document the event through still photos. “It was meaningful. It was as if Martin Luther King, Jr. had given Amethyst his personal blessing.